Getting Bigger by the Day

There were several things I could have posted about today. It's April 1st, so I could have talked about April Fool's Day, but I've never been a fan of practical jokes, so I didn't want to go there. I could complain about waking up this morning and seeing more snow coming down, but I've gotten tired of complaining about the weather. And I think I'm coming down with a cold, so I could rant about making it through the entire winter without getting a cold, and then getting the sniffles and raspy throat in April. But I'd just as soon try to put that out of my mind.

Instead, I decided to post some new pictures of the little guy. Who is getting bigger by the day. He's four months old now and a happy, healthy little boy. 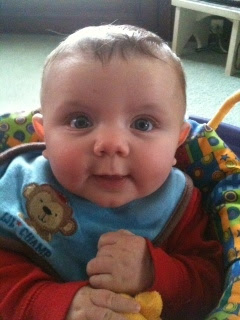 I babysat for him the other day and sent his mommy this picture. 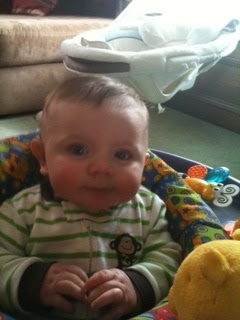 He wasn't exactly thrilled to be woken up to get his picture taken with the Easter Bunny. 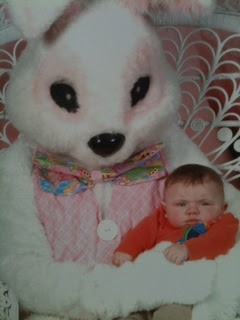 But he sure does love his Elmo! 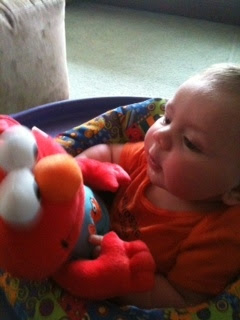 Have a great April. Hopefully soon I will no longer want to rant about the weather or spring colds. But expect new pictures from time to time. Grandma can't resist.

Good choice! Since you have such adorable pictures. It seems like fun to be grandma (though I am not ready yet, God.)

Good choice, Natasha. Who could resist such a cutie? he's getting so big! love the frown with the Easter bunny. My kids were okay with Santa, not so much with the Easter Bunny

Thanks, Carly and Helen.

OMG!!! I could just eat him!! (And seriously, this has to be a southern phrasing, I had a woman stare at me once after I said that. It's a compliment. I swear!!)

He is so ADORABLE, Natasha!!!