So I did something new this weekend. Well, I didn’t do it, I watched, but a friend of mine did it.

Ever heard of it? I hadn’t until he signed up for it. It’s a four mile obstacle course. Unfortunately, once he ran into the woods we lost sight of him for an hour. All we know was when he came back out he was COVERED head to toe in mud.

What had he done while he was back there?

Well, trudged through a mud pit, dragged a 70 pound rock up a hill, crawled under barbwire, climbed a few walls, carried a few sandbags up a hill, swam across the Catawba River, and rope lifted a bucket full of cement.

Can you say wow?

This is the first obstacle the racers had to face (and the only one we as the spectators saw before they enter the woods). Under, over, under. 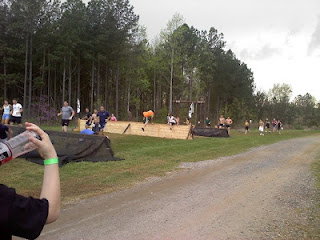 After they do that, they disappear for about an hour. So me, his wife and kids made the long trek around to where we would get to see the last leg. This picture is what we see as the racers start to emerge from the woods. Yep, covered in mud. I won't lie, at this point, my envy went up. LOL. This sort of thing is right up my ally. A way to challenge yourself in mind and body. I decided right here, I'd participate in the next one. 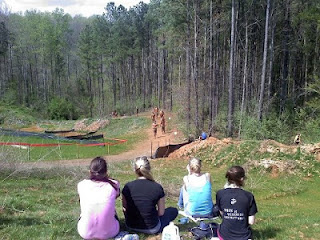 This is the final leg that the spectators get to watch. The racers have to shimmy across this wall, throw a javelin in a haystack (seems easier than it is), then do some kind of weighted row for 300 meters. 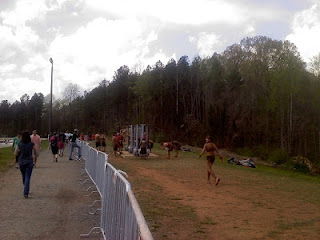 There is one final wall to climb, a fire pit to jump over (yes, I said a fire pit) then they have to fight their way through men hitting them with foam bats, then swim to the finish line. 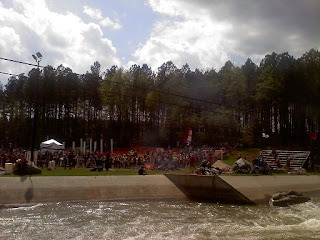 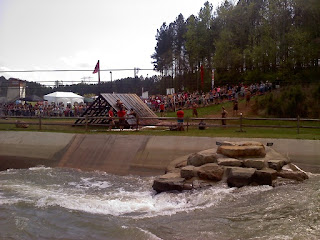 This is my friend jumping over said fire pit. I can't take credit for this awesome photo. We were on the other side where you see the fences in the background. But I asked his permission to share it because it really is such a great photo and really, really captured the moment. 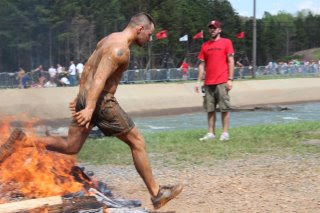 You want to know what the best part of this was?

The atmosphere. You had so many people doing this race, from different sizes to fitness levels to ages. Everyone encouraged everyone. I was proud of everyone that attempted this. Just to buck up the courage to sign up for something like this is hard enough, but to actually do it, to complete it, is something else all together. Some people were so exhausted by the time they came out of the woods, they were barely walking. But they powered through, it may have taken them three hours to complete, but they did it.

The video I've embedded down below inspires me every time I watch it. It fills me with such "I can do anything," emotion, I feel like I can tackle the world. Maybe this is why I want to tackle a race like this. And if this video fails to move you, then read this awesome article. Talk about inspiration, people. With friends and family, you can face anything.

Paraplegic proves barriers can be conquered with a little help from friends.


By Abby Niles at March 28, 2012
Email ThisBlogThis!Share to TwitterShare to FacebookShare to Pinterest
Abby Niles
I'm a stay at home mom to 3-year old twins.

Awesome obstacles it was, and tough races too. Thanks for sharing this to us, looking forward always for more updates. I loved the video, and the pics too.

This is fascinating and inspiring! Let us know if you do it, Esme!

@mudrunner thanks for stopping by!

@Vonda I'm signing up for the Warrior Dash in May. It's shorter than the Spartan Race and seems like a really good one to get my feet wet in. Next year, I will tackle the Spartan Race though. I started training this week and after I complete the dash, you better believe there will be pictures shared lol.

Spartan race is really a great activity during weekend. I have tried it before and it is really bring lots of fun. I am glad that you are also participating on this extreme sports activity.

I love those pics, it was a great post. Thanks for sharing this to us, looking forward always for more updates. Exciting race event !