Last Chance to get Flaunt It for FREE

Flaunt It, #1 in the Paolo's Playhouse series is still free at Amazon, Barnes & Noble, and Sony until March 28th.So if you'd like to try a sexy emotional short read, now's the time. I've posted an excerpt to tempt you and couldn't resist posting the beautiful covers for all 4 playhouse stories.

He didn’t say anything to Piper about the Playhouse until their relief arrived. She climbed up on a barstool with a curious grin on her bright pink lips. Her lip color matched the wide pink stripe of hair at her temple, a bright contrast to the rest of her short, spiky, platinum blonde hair.

“I didn’t know Chuck and Tanya were working tonight.” She grabbed a couple of swizzle sticks and drummed them on the bar. “I thought we were working late. What’s going on?”

“Sure. Spontaneous is cool.” She tossed the sticks and leaned closer. She smelled like sunshine, even after dancing and working the floor for hours. “Can you tell me about it or is a big secret?”

He took a deep breath. “Remember my friend, Paolo? I’ve told you about him.”

“Yeah, I remember. The guy who has the sex place, right?”

Her eyes widened. “Is it like one of those dungeons I’ve heard about?”

He couldn’t tell if she hoped it was, or not. “No. There aren’t any public rooms at the Playhouse. Just private playrooms for private fantasies.”

“That’s right. I remember. There are different rooms for different fantasies, right?”

He eyed her cautiously. “Yeah.”

Her whole face lit up. “Ooh, I’m excited. Which one?” Nothing seemed to faze her and for some reason it irritated him. Probably because everything she did fazed him.
“Are you sure you’re not too tired?”

No way was he telling her now. “You’ll see.”

“Wait.” She grabbed onto the front of his shirt, pulled him forward and kissed him, hard and fast. She tasted like peppermint. “You’re not going to tell me?” She was too damn cute when she pouted.

“It’s a surprise, all right?” He didn’t want to give her time to worry about the reasons he picked the room he did.

“But how can I get ready for the fantasy? What if I need…I don’t know…ropes or something?”

“Do you want ropes?” he snapped. She released his shirt abruptly and he took a step away. “Want me to tie you up? Or maybe you want to tie me up?” Jake and everyone else within hearing distance were taking in every word.

He didn’t know why he was being such a jerk. Maybe guilt did that to a guy. He softened his tone. “You let me worry about that, babe. Besides, everything we need will already be there.”

Her eyes had lost some of their spark but her bright smile almost made up for it. “Okay. What should I wear?”

He shrugged. “What you have on is fine.”

From the horrified look on her face, you’d think he’d told her to wear a paper bag.

“No. These are work clothes.”

He reached across the bar and hooked his finger in the deep V of her top. Then he pulled her forward this time and kissed the tip of her turned-up nose. The patrons loved their give and take across the bar, but this time wasn’t for their benefit. “It doesn’t matter what you wear, Piper.” If he had his way, she’d be naked before long. 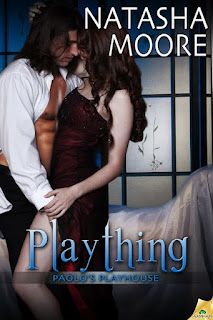 “Not long. I thought we could just leave from here.”

“Not in my work clothes, Ben. Not without a shower.” She hopped off the bar stool and waved to Chuck who was taking over as bartender. Piper met Ben at the end of the bar and she leaned into him, kissing him hard, the way he liked it. Her breasts pressed into his chest. ... “Pick me up in half an hour. I’ll be ready. Promise.”

Ben watched her bounce out the door. That was Piper, up for anything. Except commitment. Would tonight get that exhibitionist streak out of her system? Or would he have to resign himself to the fact that she lived for showing off for everybody?

That he wasn’t special at all.

GREAT excerpt, Natasha! I'm curious what room they'll be in!