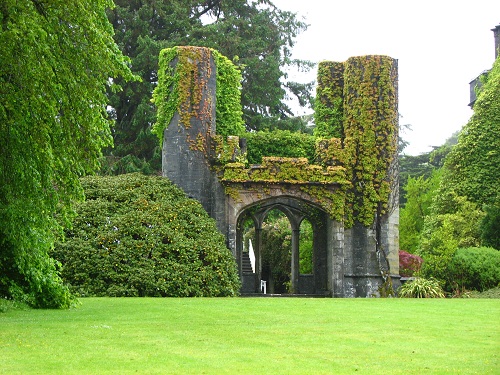 Armadale Castle Gardens consist of 40 acres of lush—sometimes exotic—plantings, winding woodland paths, and giant 200 year old trees among other things. The gardens sit on the protected Southern part of Isle of Skye known as Sleat (pronounced "slate"), which receives the benefits and warmth of the Gulf Stream.
The castle and gardens are part of the 20,000 acre estate known as Clan Donald Skye owned by the Clan Donald Lands Trust. Traditionally, it was once part of the Clan Donald land of the Sleat peninsula. Although I don't have any photos of it, we visited the Museum of the Isles, also on the estate, which contained a rich and amazing collection of historical artifacts associated with the area. 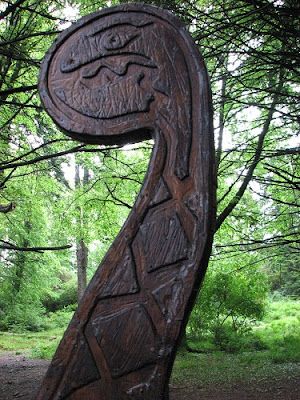 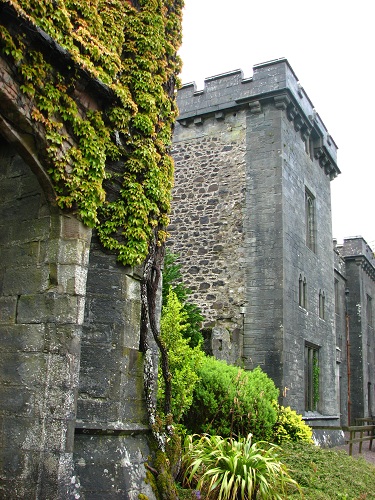 MacDonald chiefs began staying at Armadale from 1650, although earlier, the clan occupied castles at Knock, Dunscaith and Duntulm, all on Isle of Skye. In the 1700s the mansion at Armadale was used as a dower house for the chiefs' widows. Around 1790 a new house was built here. In 1815 this was extended. A fire in 1855 destroyed most of this section and it was rebuilt as we see it today. In 1925 the MacDonald family moved and abandoned the castle. 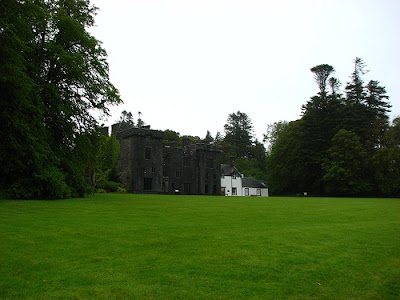 It was cloudy and rainy the day we visited so it's difficult to see the castle in this photo. Click here to see photos of Armadale Castle from the early 1900s. 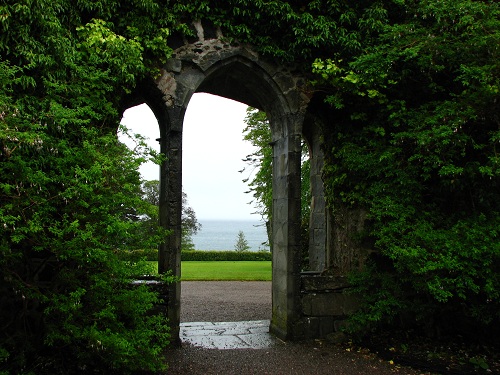 Today Armadale Castle is mostly a ruin with little more than walls remaining. No one is allowed inside because of safety concerns. But visitors are allowed into the left side which consists of a romantic and picturesque staircase and window frames with vines growing over it. Weddings are held here. Part of the original mansion, from 1790, remains in good condition (below). It is called the Somerled Rooms.  Clan Donald is known as the Sons of Somerled. 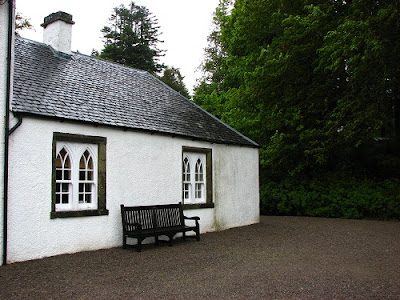 I hope you enjoyed this visit to Armadale Castle!
Thanks!
Vonda
www.vondasinclair.com

Those photographs are absolutely beautiful. Sleat is like a Hawaiian island in the North Sea. Thank you for sharing these with us.

Thanks so much for visiting, Angelyn! I agree. It was surprising and wonderful to see such lush gardens.

It's sad about the fire that destroyed so much of the castle.
But it is breathtaking.
I live in dry, brown Utah. Green in beautiful!

Thanks for the pictures.

Thanks Sandy! Yes, it is sad about the fire. I hope someday the trust will restore the castle. It sits in a beautiful location.

I am so glad to see these photos, Vonda. I know we discussed Armadale before you left because we loved it so much. We were there in the Fall and the colors blew us away. We were told that there is one of every tree in the world planted there. Don't know if it is true, but they certainly have a lot of varieties.

Ken enjoyed seeing the castle as a whole, too. He pointed out where he had his photo taken. :)

We also went through that museum. All those long swords were amazing. I never have figured out how they lift them much less take a swing at someone.

Thanks for taking me back to such a fantastic memory. Hugs!

Beautiful, as always. I'm in the clan MacDonald from both my parents (me and millions of other people, lol). The Viking boat looks so tiny. Can you imagine leaving sight of land in that thing?

Hi, Paisley, I remember your beautiful photos of Armadale and they inspired me to want to visit! The gardens are so beautiful no matter the time of year. We saw a lot of bluebells too. The museum is fantastic with so much information there's no way I could remember it all. I wonder if there's a book covering all the displays? I'll have to check. Thanks for checking it out! Hugs!

Carly, how cool that you're a member of Clan Donald! I was just reading about an interesting DNA project concerning the clan. http://dna-project.clan-donald-usa.org/

The Viking boat is probably much smaller than a real one would've been. It was not even a replica really. Not sure what to call it. :) But it was neat sitting in the woods, almost like a band of Vikings had slipped on shore and hidden their boat.

Vonda, thank you for sharing these gorgeous pictures! They bring me such fond memories of a trip I took with my husband and two daughters when they were little girls. It was incredible to be at the northernmost point of Scotland - stunning!

Sophia, thanks for checking out my pics! I'm glad you enjoyed them.

It's so very beautiful! Thanks for sharing the pictures.

Wow, Vonda, those are amazing pictures. I'd love to see that for myself someday. Thanks for posting these!

Such beautiful pictures. I'm pretty sure I'd be happy to live in a tent if I could have that view every day. Thanks for sharing these with us.

Nina, thanks! I'm so glad you like the pics!

Thanks, Vanessa! I hope you get to visit Scotland and Armadale! You would like the lush green places.

Thanks, Ally! You have a good point. Scotland has some of the most breathtaking views.

Those pictures are amazing..Makes me wish I could see it in person.

Thanks Savannah! I know you would enjoy it. Hope you get to visit.