Plaything, the 4th Paolo's Playhouse story, is now available for pre-order! The release day is May 8th, but if you don't want to forget, pre-order it now so it will show up on your device as soon as it's available.

I'm excited to share the cover and blurb with you. This is Paolo's story and the one that started it all (at least it's the first story in the series I wrote even though it's the last one to be released.) 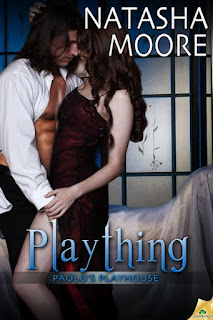 Warning: Features a sexy Italian whose lyrical voice can charm or command, whose sensual hands can stroke or spank. Stop by the Playhouse and live out your fantasies!

And of course, the first three stories in the series, Flaunt It, Risk It, and Birthday Girl are all available now.

Huge congrats, the book sounds sexy and I love the cover..

Thanks Savannah. Isn't that cover great. The hero is sooo yummy!

Thanks, Vonda! I hope everyone is looking forward to Paolo's story. :)