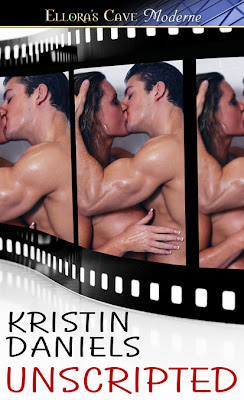 Today is the release of my fourth book with Ellora's Cave Publishing -- Unscripted. Every book an author pens is special to their heart, and this one -- for me -- is certainly no exception.

This book was originally born by me asking a slew of fun what-if' questions. What if an actor and an actress who disliked each other were thrown together to film a blockbuster movie? And what if that movie involved a hot and sexy love scene? Would the actress go through with it? Would the actor?

What if there was more to the story than met the eye? What then?

As this book unfolded under my fingers, a deeper connection between my hero and heroine morphed the story into something I hadn't really expected. My hero's pain was very real for me, as was my heroine's anguish. All of their feelings ran through me -- anger, pain, regret, lust, desire -- but one was always constant. In the simplest terms, Unscripted is a love story. A hot love story, LOL, but a love story nonetheless.

Brynn Lang is already beyond nervous about getting naked in front of the camera for her first big Hollywood love scene, and the situation only worsens when her new co-star arrives on the movie set. No way can she rush head-first into filming a passionate sex scene, not with the one man who broke her heart.

Fresh from a three month stint in rehab, Ryan Manning is now clear, focused and ready to tackle this role of a lifetime. But there’s more than just dollar signs and super-stardom enticing him. Brynn’s here, looking sexier than ever. Ryan’s determined to make amends for his drunk-assed mistakes and win her back, and he can’t think of a better way to jump-start her desire than reminding her of the inferno that always raged between them whenever they touched.

But nothing’s ever that easy. Brynn’s furious and refuses to listen. This time, he’s on his own. There’s no script for him to follow. All he has is sincerity, honesty, and love.

He hopes to hell and back it’ll be enough.

Ryan glanced over his shoulder in the direction of Brynn's room. She didn’t think he could see her, not in the dim light that surrounded her, but the way he stared a minute before turning his whole body had her wondering for sure. He took a step, then another and she found herself mimicking him and pressing her palms flat against the glass, in full view, when she could go no further. Her blood burned like fire through her veins and her head spun even faster.

She didn’t want to believe him any more than she wanted to shove a red-hot poker in her eye. Because if she did, it would mean giving up her renewed anger. She needed it now, wholeheartedly relied on it to keep her focused. Even though the rush of heat tingling over her skin proved her body had no qualms in reacting to him, she hoped to hell and beyond that her heart and mind wouldn’t be so easily conquered.

But then his expression changed, darkened somewhat. He lowered his shoulders and clenched his hands at his sides again and again while his chest expanded on a deep breath. And when he licked his lips, she flinched. A tiny, angry coil inside her snapped free and she gripped the door handle.

I shouldn’t be doing this.

The thought popped in her mind, and she flat-out ignored it. It was the flash of instant need mixed with that draw, that fucking helpless draw that had her yanking the door open and stepping out onto the balcony as he ran up the steps two at a time. He came to a stop inches from her, breathing fast and hard, but so was she. With the last bit of sanity floating in her mind, she spun away, because God, she had to, but he grabbed her elbow in a tight grip before she could escape his reach. As he pulled her closer, the anticipation of a killer kiss tingled all the way to her toes. And as his lips crashed against hers, that weak expectation was blown completely out of the water. Every ounce of air whooshed from her lungs, but she couldn’t find the means to care. He was kissing her, like he had so many times before, like he had that very morning.

Body, one. Heart and mind, zero.

“Brynn,” he whispered against her lips as they clutched each other.

“Shut up,” she replied, not wanting to think about what she was doing, or why. All she wanted was for him to touch her, for him to extinguish the blaze racing over her skin.

He bent his knees to pull her closer while he dipped his tongue into her mouth. He tasted much as he had earlier. Fresh, clean. New, yet so agonizingly familiar too. She’d never get over the way he held her in his arms, or the way he kissed the living hell out of her.

He cupped her ass, and she didn’t wait for any sort of invitation. She dropped her sandals and room key, lifted to her toes and practically crawled up his body until she could wrap her legs around his hips. In a half-dozen steps, he had her pinned against the glass door.

Everything happened so fast. She couldn’t think and it didn’t matter. Her fingers found their way into his hair. His moved from her ass to caress along her thighs. When he lifted under her knees and rocked into her, she broke from the kiss and thumped her head back on the glass.

He was so hard and thick, and she’d missed him so damn much. An inferno raged between them. Even their clothing didn’t mute the fire where their bodies met.

As he kissed lower down her neck, she squeezed her eyes and turned her head. He was headed for that spot, that one little spot that always drove her out of her freaking mind. He found it in a heartbeat with his tongue, and she held back a throaty moan at the first hot, wet pass.

Check out a different excerpt on my website, www.kristindaniels.com.
Click here to get a copy of your very own!

I love a hero who has to struggle to win his love. And is sounds like Ryan has his work cut out for him.

You have a winner on your hands, here, Kristin! Thanks for a great, ahem, read.

Thanks, Mari! I hope you enjoy it!!

Katie, thank you! And you're more than welcome :)!

Kris, I can't wait to read this story. It sounds great!

Love this story! Many happy sales.