The Naked Male Tour of Austria 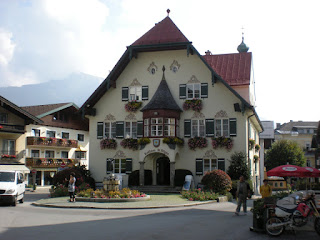 I did not go to Austria to view naked men. That was just a side benefit.

We started our vacation in Vienna. The city provides a wealth of inspiration for a writer, with everything from richly decorated historical buildings to fabulous baroque art and even the Lipizzaner horses (amazing show and the riders...yum).
Most every restaurant and cafe has outdoor tables and the city is full of charming side streets and entire city blocks that are vehicle free. Vienna is a walker’s and bicyclist’s paradise in many parts of the city. In the Spittleberg district (where 18th century men could "enjoy life to the full outside their home") we had drinks one evening at an outdoor cafe on one of these cafe-lined side streets. Totally romantic. I went inside to use the ladies room (identified by the bra on the door).
As I was washing my hands, I looked up where I expected the mirror over the sinks to be. What I saw, however, was two young men doing their business about two feet from my nose. In place of a wall above the sinks, there was a large glass fish tank (immaculately clean) which occupied the space between the men’s and ladies’ bathrooms. One could scarcely avoid the "view".

I was shocked, but it’s great for a story tidbit. Dibs, ladies. I reported back to hubby who said that women are total voyeurs, but they don’t want to admit it. Are they? I have to say, I wouldn't have looked intentionally. One has to keep in mind that all kinds of guys use the facilities.

We saw The Magic Flute at the Viennese Opera. Though I normally enjoy opera for the music, the costumes here were so amazingly vibrant and colorful, they inspired a whole new series for me. The performance was fabulous. The Opera House itself was a bit of a disappointment, as much of it was destroyed during WWII and rebuilt during the 50s in, unfortunately, a 50s style. There were glimpses of the original splendor.

We moved on to Salzburg, a unique city that has been carefully maintained to retain much of the beauty and charm of the past. 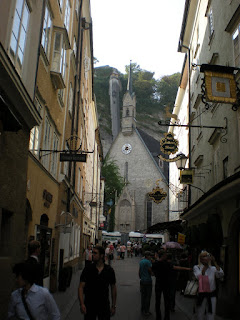 (Mozart was born and raised in the yellow house on the left.) However, the old city has been given over almost entirely to shopping, and chain stores abound. We accidentally stumbled upon the Mirabell gardens where (supposedly) the original Maria von Trapp and her stepchildren could be seen singing and dancing around the fountain. What we saw was my next naked man, a fellow who was strolling inside the fountain pool, attempting to hang onto his shorts. But he lost the battle just as we walked by and we were successfully mooned. You know, I bet the children were a lot more charming.

Next we drove up into the lake district for some hiking. When we passed by Lake Mondsee (also a setting for The Sound of Music movie) hubby noticed a nude beach. We did not even take a peek (having learned in our travels that there is rarely a person on a nude beach you want to see, well, naked).

But we did not escape the lady sitting on a bench on the regular beach who was changing her clothes. Took off her bathing suit top as we approached and, by the time we were walking by, she was in the process of removing the bottom. Okay, that’s the naked lady story. Off subject.

However, I do feature this nude beach in an epilogue to my story Scarlet and the Sheriff. The free epilogue is available here.

We drove into the Austrian Alps on the Grossglockner High Alpine Road, a white-knuckle ride up to the highest mountains in Austria. This road hugs the Alps, ascends to more than eight thousand feet in the course of 30 miles, and was lined with bicyclists making the ascent. Can we say fit men? Unfortunately, none of them removed their clothes for my enjoyment. When we got to the top, however, there was a male hiker disrobing. Standing right there in the parking lot, with dozens of people milling around. He stripped himself naked to change his outfit. I don’t know why, though it’s not the first time I’ve seen such a thing. However, he wasn’t hot. Not that I looked.

Our last night in Austria taught me, oddly enough, why everyone wants to know what a Scotsman has under his kilt. It is well worth knowing about. Now, I am happily married and can’t take advantage of this knowledge. But, if you’re not, get yourself over to Scotland.

So, here’s the tale. We were at Octoberfest in Salzburg. 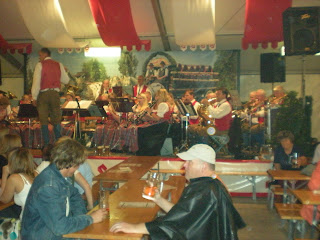 (Technically, it’s a religious type holiday in Austria, but even the Austrians admitted it was hard to tell the difference.) As you see from the picture, they gather in large groups to drink excellent beer, sing along to an oompha band, and dress in native costume. (Think flowered dirndl dresses with aprons for the women and leather shorts and checked shirts for the men.) 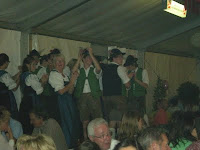 The sight of two Scotsmen in full kilted gear added to the festive atmosphere. Added considerably, as you will see.
Everyone sits at big picnic tables family style, that is, wherever you find a seat. The Scotsmen were at the table next to mine, and I was keeping a casual eye on them. (Yup, casual.)

Though we were all eating dinner, it was still full daylight. They were bantering with an Austrian woman at my table, laughing and having a grand time (in German).

The guys stood up, still joking with her, when suddenly one of them simply pulled up his kilt and exposed his wares for the Austrian lady.

That’s right. He wore not a stitch under that kilt and not only that, he was shaved as bald as a robin’s egg. No, dinosaur egg would be a better simile. Because that man had a set of pipes…whew, I’m still agog. It’s amazing how shock immobilizes you, and yet allows you to focus intently.

He dropped the kilt and the Austrian lady and I started to cry.

No. No. We didn’t. She blushed brighter than the red stripes on the tent. (We think she had dared him to do it.) I managed to close my mouth and tell my husband what had happened. The man sitting next to me and I laughed for ten minutes (though he was blushing). It was so unexpected. The two Scotsmen sat back down and within five minutes, there were two young women sitting across from them (coincidentally, I’m sure.)

Well, in the US, that stunt would probably cost him a night in jail. But the Europeans are much more casual about public nudity. 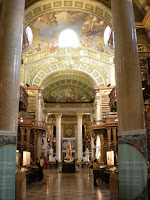 I have to leave you with one last set of pictures, because I love libraries. 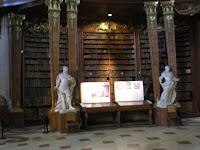 The National Library of Austria. Now that's a library (with an amazing collection of rare books).

Finally, I have a brand new web site if you'd like to check it out here.
By Carly Carson at October 06, 2009
Email ThisBlogThis!Share to TwitterShare to FacebookShare to Pinterest
Labels: Austria, Carly Carson

Wow! Looks and sounds like you had quite the vacation. Thanks for sharing with us :D

I was amazed by the communal toilets and men peeing against trees in France...I guess it's another world!

What an interesting blog, Carly. I haven't visited Austria for years, but I didn't see any naked men when I went. (I was a teenager on my last visit, so I'd definitely have remembered.) I didn't see any men in kilts when I went to Scotland this summer either. Sounds like you're a naked man magnet LOL.

Oh, and can I just say we don't have communal toilets in the UK. Nor do we change clothes in public. We're more self conscious.:)

Wow, Carly, sounds like you had a great and...um...memorable trip.:-)
Thanks for sharing.

I could write 10 blogs on the subject! When you travel with my husband, you never stop.

I think that's wise of you! Though sad for the rest of us.

They have a race up that mountain every year. Just sayin....

I do think of the British as more reserved. But no kilts in Scotland! That's a crime. Esp. when one is a naked man magnet like moi! ROFL

Now THAT is a tourist brochure!

Both hilarious and informative - and I got a terrific sense of your travels.

Glad to see you enjoyed the "sights"!

Wow, Carly, the only naked man I ever saw in Europe was the one who flashed my sister and me on a street in Frankfurt, Germany! Frankfurt, get it?

Beautiful pics! And I love your descriptions of your travels! Those naughty Scotsmen! They need a good spanking. ;)hehe In Scotland I only saw a couple males in kilts. Either young boys or older men. None you'd want to be flashed by. Yes, what a shame! The Highland Games right here in the US is one of the best places to see men in kilts. Though obviously Austria is now tops for kilt viewing (or under the kilt viewing.) LOL

Lise, Can you see the Dept. of Tourism publishing a brochure with that title? lol

Natasha, it was certainly memorable, and I couldn't tell the half of it.

Liane, keep your eyes peeled. As far as I can tell, they are everywhere! heehee

Carol, Flashing is a whole 'nother subject. Keep those frankfurters under wraps! Hubby speaks German and, though he wasn't paying attention beforehand, he said he thought she'd dared him to do it.

Zora, that's what we did. This Austrian man and I, perfect strangers who didn't speak any language in common.

Nicole, does this mean I should stop lobbying for a trip to Scotland? And just where are those American Highland games? lol

oh wow - what a fantastic trip! I'm jealous that you were in Austria for Oktoberfest. We were in Munich last year, and it was just amazing... we vowed to return every year. But the old pocket book put the kybosh on that idea.

A trip to Scotland is more than worth it for other reasons (not kilted men haha.) The scenery of the landscape is awesome, don't you think? As for Highland Games, they are all around. There are at least 4 within driving distance of me. You could do a search online and probably find one close to you.

What a time you had in Austria. I can well imagine your shock in that bathroom. My hubby wants to return to southern German. Maybe we could visit Austria at the same time. I had preferred Scotland....those kilts are a draw.

Thanks for sharing your experiences. It was fun to travel with you through your blog.

Love your blog! During the times I was in England and Wales, I never made it to Scotland. However, I did go to Alma College here in Michigan. Very Scotish - if you play the bagpipes you get a full ride scholarship. And yes... home to the Highland Festival.
During formal ceremonies, select young men wore kilts... and yes with nothing under them. Heh, heh... I won't tell you how I know.

December, I have a feeling Oktoberbest in Munich puts the one in Austria to shame. I heard they get a million visitors.

Nicole, Yes Scotland is great. But it's too bad if they're giving up such an "interesting" costume.

Paisley, I lobbied for Scotland when we were first planning the trip. But hubby doesn't share my love of all things Scottish.

Mary, that's an interesting tidbit about the scholarship. But you really you should share how you know! lol