Puttin' on the Ritz for Halloween 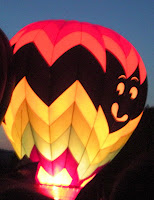 Would you like to do your trick or treating in the neighborhood where the owners of the Tootsie Roll Company live?


There’s where we found ourselves the first year we went out for treats in the town we now live in. Don’t get the wrong idea. We live in a nice, ordinary neighborhood. But we border a very fancy neighborhood, which is part of our school district. The whole district is walkable, even for small children. So we do it all when trick or treating.

My husband goes with a couple other dads, and takes one or two of the kids and their friends. So that first year, hubby was going with a friend who lived in the fancy neighborhood. They set off, expecting to gather a pillowcase full of finger-sized candy bars and a few bucks for Unicef.


“I got invited in for glasses of wine, and one person even brought the wine out to us!”

Let’s see, booze, smokes and junk food. What’s missing? Well, if he got offered a lap dance, he didn’t tell me about it.

The kids were overwhelmed with the humongous candy bars. That became their new standard for a good haul. (Fortunately, they don’t eat most of their candy and I find it months later, stashed somewhere that even they forget about.)

We soon discovered that a family whose money originated in the Tootsie Roll Company actually lived in that neighborhood. They always gave generously (yes, Tootsie Roll products). Occasionally, I would find myself at the house (a very nice home). Several years ago, there might be a few extra people at the door, but no crowd. Then the word must have gotten out. In subsequent years, a crowd started growing, until finally they had to hire a policeman to handle things. I stopped going at that point, though my husband continued to take the kids who insisted. About five years ago, Tootsie folks sold the house and moved out of town. But, I guess most people don’t realize they’re gone. The new owners still, to this day, have to hire a cop. People don’t want to give up the fantasy, I guess.

One of my kids last year was allowed to go out with friends of hers from another town.

She returned home all excited because a couple of Red Sox players who live in that town were actually giving out candy. She said one guy (a top player) was sitting on a chair at the end of his driveway passing out candy. Needless to say, it’s thrilling for the kids, and I give the guys a lot of credit for doing it.

But maybe they’re just like me (except for several millions). I love giving out candy on Halloween. I love seeing the neighborhood kids and the friends of my own children. I enjoy guessing who’s behind the elaborate costumes. Of course, I also love going door to door with my children. Which always presents a problem as you can’t do both at the same time.

I’m not a fan of the ghost houses. In fact, they scare me, no matter how amateur they may be. So I tend to go out with my daughter who won’t even walk on the side of the street where there is a haunted house. She won’t go in iParty during the month of October. My kind of girl.

This year I’m noticing more yard decorations than I’ve ever seen before. Some rival those Christmas houses that become neighborhood attractions (or eyesores, depending on your perspective). My neighbor puts up these huge balloon monsters that require electricity to pump air into them. In the morning, she turns off the air and they lie sadly on the ground, all deflated and looking more like trash than anything scary.

So, what do you think? Is Halloween growing more elaborate?

I don't know if I would say Halloween is more elaborate but i do think more people are appreciating the small things, like children trick or treating, and adults just enjoying the fun of the holiday. There's always a few bad apples here but on the most part we enjoy the night then start planning for Thanksgiving and Christmas.

I hate that the stores display Halloween alongside of Christmas. They are rushing the season to make more money.

We leave candy on the porch while we're out in the neighborhood, and usually there's some left when we return. Of course, we live at the end of a dead end street, up a large hill and there's only two house up here when the kids get to the top. Most of them know this and rarely make the climb.

Hey, Lisa, I live at the end of a dead end also. You do get less traffic. I don't like to leave candy out because of the animals, which are plentiful where I live. I've hired my sitter a few times to hand out candy, and she comes all costumed up. Bless her.

Christmas should not start until after Thanksgiving!!!

I, too, have noticed that there are a lot of Halloween decorations this year. My neighbor has orange ribbons on their mailbox. Never have before. Maybe we're all looking for a bright spot in this eonomy.
Linda

Carly, I think a lot of folks in L.A. think they can trick-or-treat in Beverly Hills and get lots of amazing candy! I don't think it works out that way though - most of those houses are behind big tall gates. My kids actually get big candy bars from our immediate neighbors because we get very few kids on our block because we're in a short cul-de-sac, downhill, few lights, and dead-end into the sand dunes. Nobody wants to walk down there. LOL And we have a fantastic haunted house in our neighborhood. They change it every year and use live people - last year it was a creepy circus (with a huge, menacing clown), another year it was an insane asylum, and another year scary pirates (no Johnny Depp here). I love haunted houses!

Linda, I haven't seen the orange ribbons anywhere. Of course we don't have mailboxes where I live.

Carol, The neighborhood I'm talking about is nice but it is NO Beverly Hills!

Not around here, Carly! :) I have a few things inside the house, but nobody has anything outside. Partly, I think it's because of being in the Baptist Bible Belt. Several of us at the library wore something yesterday and will today. Two of us, medieval costumes. Two t-shirts with something Halloweenish. Some smiled. I got a lot of compliments about my hat. But some gave us the evil eye for celebrating Halloween at all.

Terry, I never really think about Halloween being frowned upon in some areas. I guess the holiday does have pagan roots. My church actually sells pumpkins as a fundraiser so things are different here.