Swords of the Highlands 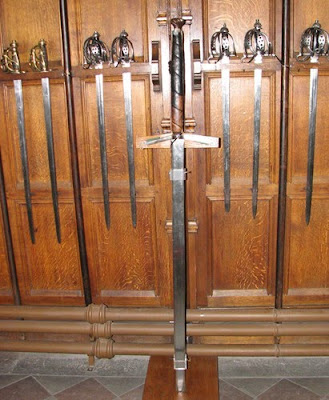 I confess, I love writing action scenes. Quite often these are 17th century battle or skirmish scenes or somehow involve weapons. I'm not a fan of gory violence, but I do enjoy exciting action, suspense and imagining a Highland hero showing off his battle skills. This first picture is one I took in the great hall of Edinburgh Castle and shows two types of swords I want to focus on here.

The most famous and well known Highland weapon is the claymore. There is some dispute and misconception about what a claymore is. Most people see it as a two-handed Highland sword. But now the experts say otherwise. Claymore comes from the Gaelic word claidheamh mor which means the great sword. AVB Norman in Culloden - The Swords and the Sorrows published by The National Trust of Scotland in 1996 says claidheamh mor, or the great sword, is “a term which should be used only for the basket-hilted broadsword. The correct term is now known to be claidheamh dà làimh” in reference to the two-handed Highland sword. The Glasgow Museums website confirms this information. 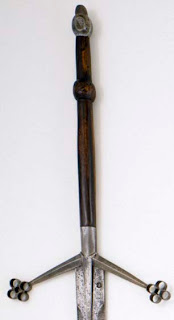 Pictures of extant swords of this type show them to be between 51 inches and 73 ¼ inches. Two-handed swords weren’t just Highland weapons. They were used all over Europe and are considered a Renaissance weapon. Though they were not excessively heavy, they were heavier than smaller swords and were usually wielded by the largest soldiers. They were often used to hack through pikes on the front lines to allow the rest of the soldiers through. Many of the blades of these Scottish weapons were German made. But it is the design of the two-handed Highland swords that distinguishes them from the others. The hilts were generally made in Scotland. In my story Devil in a Kilt, I describe one of these swords, specifically the Highland design of the hilt:

Something flashed in the dimness of the tent behind Ranald and her gaze darted to it. A huge two-handed Highland sword sat on a stand. A light must have glinted off the blade.
“Ah, I see the sword has caught your eye.”
“It’s beautiful.” And very large. Taller than her own five-feet-four.
Ranald moved away from the table and stood beside the sword. “You should see the detail.”
She sidled around the table and joined him in the middle of the open-sided tent. A few nicks and pits scarred the long dull steel blade. Spiral-carved, leather-wrapped wood formed the grip. The brass cross-hilt guard featured down-sloping arms with four tiny circles on the ends.
“Only a very strong warrior could successfully wield the claidheamh dà làimh in battle, and Gavin MacTavish was such a man,” Ranald said.
“It’s amazing. Is it authentic?”
Ranald’s mischievous blue eyes twinkled. “Of course. It’s nigh onto five-hundred years old. Would you like to hold it?”
Though she didn’t like weapons and the violence they stood for, she did love antiques. Her hands itched to touch the hilt of this sword. She set down her backpack, rubbed her palms together and stepped forward. Then back. “Oh, no, I couldn’t. I’m sure it’s very valuable, and I might drop it.”
“It’s a sword, Shauna. It’s seen many a rough day.” He winked, lifted the sword out of the stand and offered it, hilt first, to her. “I imagine you’ll regret it if you don’t hold this important piece of history for at least a few seconds.”
Shauna wiped her palms on her skirt. “All right. If you insist.”
A wily smile spread across Ranald’s face. “I daresay you will enjoy it.”

And of course this is the object that causes Shauna to time-travel.


How is this weapon used? Though the weapons in the video below are probably not Highland in design, this demonstration can give you some idea of how a two-handed sword is used. Obviously the whole body must be thrown into the action. 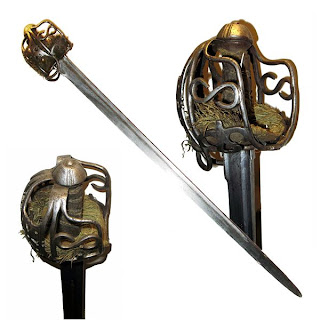 Photos of swords from Glasgow Museums.
You can learn more about each sword there.

The narrow bars forming a cage protected the hand of the person using it. These were based on a design of the mid 1500s. The specific design of the cage varied and evolved over the course of the next century or so. Many of these improvements were for the purpose of further protecting the wrist. Not only were the basket-hilts functional, but also decorative. The Scottish regiments today still carry this type of sword. 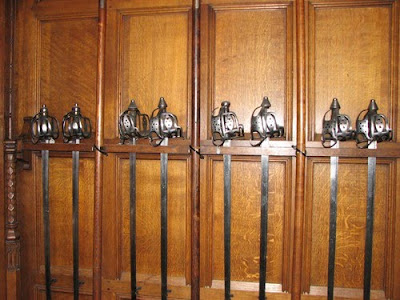 Another photo I took of basket-hilted broadswords in the great hall of Edinburgh Castle.

How is this weapon used? Please click to watch the video.

Very interesting blog (and I'm not into weaponry). Just as a note, the first video has been removed.

Oh I'm so bummed the video was removed. It was a great one. And now I can't find another I like. Sorry!

Your blog post really piqued my interest in learning more about Highland swords, and the excerpt is terrific. Gotta love those Highlanders and the perfect romantic heroes they make :)

Nicole, Aack - I can imagine that battles were pretty bloody back then - just like those battle scenes in Braveheart - yikes!