Never more than when I’m reading romance fiction have I been a fan of series novels. When an author creates a compelling heroine and irresistible hero, readers want to learn even more about the couple long after the last page of the first novel in a series is read. We follow the lovers’ trials and triumphs, cheer the development of their dedication to each other, and keep hoping they’ll achieve a happily-ever-after. Whether a story ends with a romantic commitment or a walk down the wedding aisle, we wonder what comes next for them?

An idea that occurred one morning as the coffee brewed allowed me to bring the Devil’s daughter and her Greek lover onto the romantic scene. After only two chapters into the writing process with this book, I plotted Hellé’s continuing exploits on Earth. 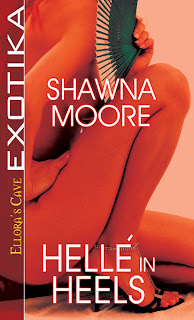 After the ten-thousandth fight with her father, the Devil's daughter is forced to surrender her trident and true love in order to save Earth from devastation of a magnitude its never known.

More than a few pulses are raised when Hellé Hawthorn and her minions hit Sin City on the hottest day of summer and make their business every man's pleasure...


Hellé gets more than a reunion with her lover in TO HELLE AND BACK AGAIN. While she learned how to deal with her father, The Devil, she’s faced with two formidable foes in this tale that tries more than her patience.

The Devil’s daughter survives a battle with ball lightening and learns her days in Sin City are numbered unless she consumes a precious mineral found only in Hell—the Hell from which she’s been banished.

Three men compete for Hellé’s attention. The first evildoer controls much of Vegas’ development and vows to destroy her. A second rogue as powerful as Satan hopes to dominate her. The third, an irresistible Greek fisherman, wants her until death parts them.

Hellé and her lover, Menlikus, embark on separate dangerous journeys with a common purpose. Their lives hinge on the cooperation of two persons—one who’s betrayed Hellé’s friendship, and one she doesn’t believe exists. 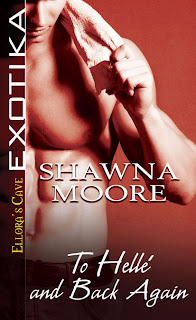 Here’s an excerpt from TO HELLE AND BACK AGAIN –


Flecks of amber shimmered inside the cinnamon-red orb as it hurtled toward me. Slender fronds filled with sparks waved around its periphery. Every hair on my head strained skyward. The sensation of thousands of fire ants skittering over my scalp competed with the sting of sections of hair being yanked out by the roots.

Caesar’s entire army might as well have marched over my chest as the flaming ball smashed against my front. All air heaved from my body and I pitched backward. My butt hit the floor and my head followed. Scalding fingers fondled my naked flesh. The cacophony in my brain built to a thick wave that foamed back and forth.

“Hellé Hawthorn.” A raspy voice coming from within the fiery phenomena whispered my name over and over.

A veil of bluish-gray smoke floated over my face. Someone or something touched my scalp. Bile bubbled up in my throat. No matter how fast I moved my eyeballs behind the closed lids, no effort coaxed a single tear.

Menlikus. My lover and best friend who’d risked his life to reach me and save me from a death worse than any my father, the devil, could impose.

Despite the swarms of bees leaving their hives deep within my gray matter, his words and breathing made it past the din.

Faint drags of his fingertips tickled my forehead. Chills consumed me and I swallowed the latest flood of bitter liquid.

“I…” Lifting my arm provided a lesson in futility. I’d been turned into a barely breathing hell-born noodle.

“You might be hurt. Even near death.” He stroked my cheek. “Lie still. I’ll get help.”

“No help, just you, Men.” The high tide ebbed inside my brain and I opened my eyes. “Did you see that?”

“See what, honey?” He kissed my lips softly and ran the pad of his finger over my carotid. “Your heart’s beating pretty fast. And you’re sweating.”

I sniffed. Peppermint on his breath. Cocoa oil on his skin.

Several more breaths did the trick. His maleness filled my nose and settled on my tongue.
A slight lift of my body brought a back brace in the form of Men’s arm. “I’ve witnessed some crazy stuff as the devil’s daughter but that ball lightning beat all.” I rubbed my eye but the stinging remained.

“All I saw was you falling almost as soon as you opened the office window.” His smile rested only inches from my mouth but I resisted kissing him. “Are you in any pain?”

My heart ceased skipping the ropes of blood that pumped through each chamber. Another swallow cleared most of the acid.

Bending both legs and rotating my head brought no discomfort. “No. And I don’t believe the devil is to blame.”

Shawna, I love series. I'm looking forward to reading the last in Eloisa James's Desperate Duchesses series, and I'm getting ready to write the last book in my McClintock Brothers series for Harlequin Intrigue.

Series books are wonderful and some of my all-time favorites :) Sending lots of creative and positive vibes your way for the writing of the last McClintock Brothers' book :)

Thank you for the kind words on the excerpt, and I'm glad you enjoyed it :) Series books are close my reading and writing heart :)