Countdown to The Cottage Next Door

Two months seems like a long time when you're waiting for a release, but this is summer, where I swear I have something going on almost every weekend and before long I won't be able to fit anything else in before summer is over. And then it will be September and WOW it will be release day for my second-chance-at-love beach romance, The Cottage Next Door.

Also, starting next week, I'll be heavy into promoting the charity anthology I've contributed to. The release date for Love Is... is Aug 5th and that will be here before we know it! Heads up - next Mon, Jul 21st will be cover reveal day - both for the anthology, and for my story, Her Royal Rendezvous. So check back next week for a peek at the awesome covers, and an excerpt from my Her Royal Romance short story. (In the meantime, we now have a Facebook page, you can "like" to get updates https://www.facebook.com/LoveisRomanceAnthology)

But for now - how about a little teaser to whet your appetite for The Cottage Next Door? I love my tortured hero and the heroine who brings him back to life.

It’s tough to grasp a second chance at love when you’re holding on to the past.

After his wife died in a car accident, bestselling author Hunter McCaffrey stopped writing—and stopped living. He’s rented a beachfront cottage to try to get his head on straight, and start the long climb up from his pit of despair.

Instead of pounding out a first draft, though, he runs the beach, drinks away his pain, and tries to ignore the vibrant woman in the cottage tucked next to his.

Still floundering months after the loss of her adventure-junkie husband, Sylvie Chase hopes some beach relaxation will help her decide what to do with the rest of her life. Instead she’s wondering what to do about her unexpected attraction to Hunter, who makes her body long for the feel of his arms around her.

As Sylvie drags Hunter back to the land of the living, soon they’re agreeing to a short fling. Just to get past their sorrow, not because it means anything. But when emotions get in the way, it’s a struggle to leave the past behind and dare to love again.


Warning: This story has plenty of sun and sand, with an energetic golden retriever thrown into the mix. Prepare to laugh and cry and cheer for two people who deserve a second chance at love. 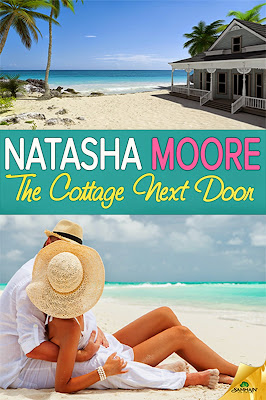 The words she’d been thinking slipped out easier in the darkness. “I’m sure she would want you to be happy.”

“What do you know?” he snapped, but Sylvie thought his voice contained more hurt than anger.

“I know what it’s like to roll over in the middle of the night and still be surprised to find the other side of the bed empty.”

“It’s like a kick in the gut every time.”

“Yeah.” She wrapped her arms around her knees. “I still save up things I want to tell him about my day…”

“And then remember she’s not there to share those things with anymore.”

“I have to look at pictures to remember what he looked like when he was healthy and fit and eager for the next adventure.”

“I can’t remember what she smelled like anymore.” Hunter’s voice cracked. “She had this soft scent like powder and flowers and I don’t know what, but I used to be able to smell it everywhere in our apartment. It’s gone now too.”

She nodded even though she knew he couldn’t see it. “I used to sleep with one of Matt’s shirts and I cried all day when I realized his scent was gone.” Sylvie was pleased she could say that without getting tears in her eyes. Maybe she’d finally reached acceptance.


The Cottage Next Door will release on Sept 16th. You can pre-order it now if you don't want to forget. :)

By Natasha Moore at July 14, 2014
Email ThisBlogThis!Share to TwitterShare to FacebookShare to Pinterest
Labels: excerpt, Her Royal Rendezvous, Her Royal Romance, Natasha Moore, The Cottage Next Door