For the past two Tuesdays, I posted part 1 and part 2 of Dunollie Castle in Argyll, Scotland. Now I want to show you some of the nearby 1745 House.

The 1745 House sits down the hill from Dunollie Castle and is a part of the MacDougall estate. The house as a whole consists of at least four sections from different time periods. The single story Laich Biggin (Low House) was built around 1617. (You can see it to the left, below.) The museum store and the Hope MacDougall Collection are situated there now. One room used to be a dairy and another one was the laundry. The Laird's house was built onto this starting in 1745 so the family could leave the castle. The 23rd Chief of Clan MacDougall, Alexander MacDougall, had the house built for his wife Mary and their fifteen children. The estate had been forfeited due to Alexander's father, Iain Ciar's active role in the 1715 Jacobite uprising. Alexander and his family had been living in Edinburgh when the estate was returned to him and the clan in August 1745. Instead of supporting Bonnie Prince Charlie in the '45 uprising, they built a new house. At this point, Dunollie Castle was practically a ruin anyway. 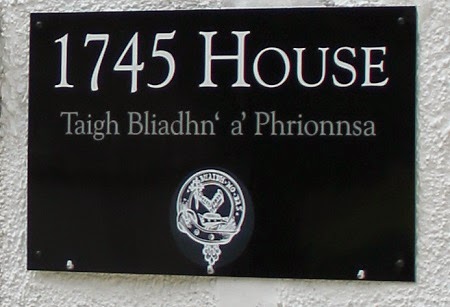 The above photo shows where the 3 structures join, the one story Laich Biggin or Low House, the 1745 House to the right and a newer addition at the top center or back. Below you can see the front of it. 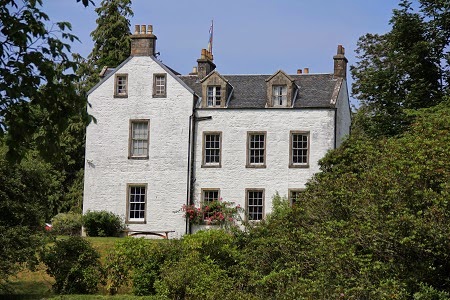 The items in the exhibitions throughout the 1745 House are drawn from the collection of the MacDougall Chiefs.

We somehow missed the Hope MacDougall Collection housed in the Laich Biggin (Low House). The collection is historically significant and consists of 5000 objects collected by Miss Hope MacDougall, the daughter, sister and aunt to three successive MacDougall clan chiefs. She grew up at Dunollie House. Some of the items are displayed in the old sitting room of the 1745 House. 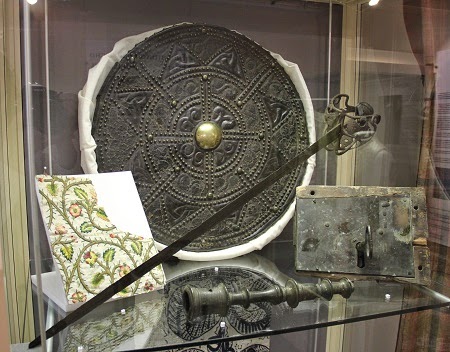 This targe (shield) is one of a pair found in the Dunollie dairy disguised as butter-churn lids. Weapons such as these were outlawed after 1745. The targe is made of oak and leather. It is brass-studded with green cloth on the back. It was made around 1715.

The basket-hilt sword or claymore is dated around 1715. The lock plate and key are from Dunollie Castle and dated to the 18th century. They were discovered in the Old Kitchen of the house during the renovation work not long ago.

The object lying in front is a socket candlestick from Dunollie Castle. It is from the 14th century and is made of copper zinc alloy with a residue of gold at the base joint. 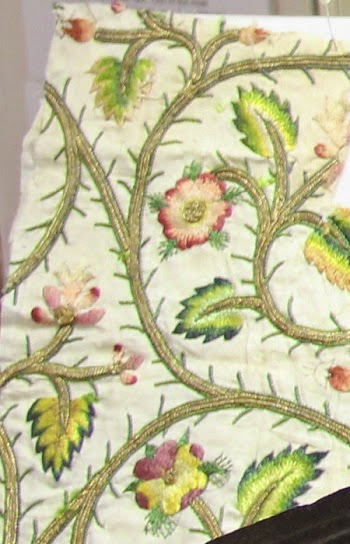 The piece of cloth with the beautiful flower and vine embroidery is a fragment of a dress, made of linen around 1620. It has silver gilt and silk embroidery. The 30th Chief, Coline, said that the family was aghast when it was cut up for cushion covers. I would be too! Can you imagine how much work and time went into this? 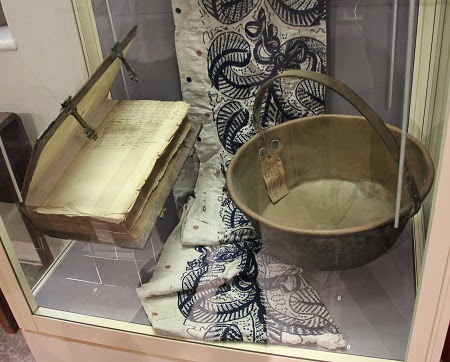 This fabric (Jacobean crewel work fern pattern) is part of the bed hangings from the castle. It is the pelmet from around the top of a four poster bed. Made of wool and linen, mid 17th century. The complete set is preserved. The family Bible sits next to it. The pot is a preserving pan brought from the castle when the 1745 House was built.


I have a large amount of photos from the 1745 House. I'll share more of them next time. Thanks for checking out my post!!
Vonda 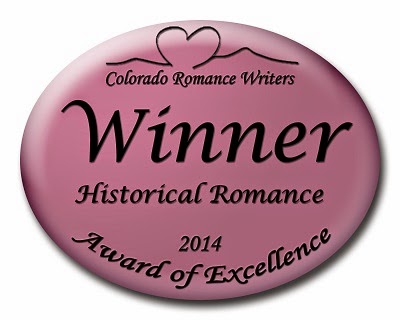 Great post and beautiful pictures! I love the shield. Thanks for sharing:-)

Yes, fascinating material. I love the targe butter churn lid. They didn't waste anything, did they?

Sounds like the MacDougalls were smart not to go our for Bonnie Charlie. The nearby clan Lachlan did and their castle was destroyed from the sea by British warships.

Would love to visit Argyll some day. Thanks for sharing your memories.

Thank you, Alanna and Linda!! So glad you liked it! Argyll is an incredibly beautiful place. You'll love it. I love that they still have all these old items so we can see them.

Very pretty and informative. Reminds of the museum at Foulis Castle that I visited twice and will again this summer during the Clan Munro gathering.

Thanks, Brenda! I would love to visit Foulis sometime.

Lovely pictures! I must go there next time I'm in Scotland. I'm with Linda here - my castle is the Castle Lachlan in Argyll and I had to tramp through the mud to get to it, ruin that it is!

Thank you, Helen! I've never seen Castle Lachlan in person. Would love to, even from a distance.

Great pictures. I love the kitchen items. Thanks for posting!

WOW! Where have I been! I absolutely love this site! What is so weird is that I just read Carly Carson's Duke of Devonwood and I loved it! I have just discovered Vonda, Gwyn & Carly all this year! I have already been a Terry Spears fan! Now I have more authors to try from this blog!

Vonda these were fantastic photos. I loved the kitchen gadgets. The one pot looks like a pressure cooker. I wonder if it was. Thanks for sharing the history and photos. You know, of course, I am once again homesick. :)

Patty, I'm so glad you found us!! :) Thanks for reading our books!!

Paisley, thanks!! So glad you like the photos. I think that is an early pressure cooker. I'm homesick too. :)