Last week I shared the blurb for the sexy and emotional category romance I plan to release in October. Today I'm able to share the absolutely perfect cover with you, designed by the talented Lacey Savage. Isn't it beautiful? 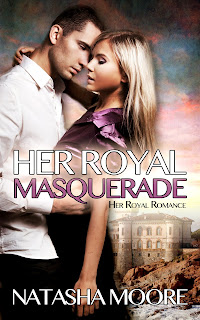 Her Royal Masquerade will be the first in the Her Royal Romance series.

The last thing schoolteacher Mia Holmberg expects when she masquerades as her royal cousin is to be swept off her feet by a charming prince. The incredible night in Vittorio’s arms is like a fairy tale come true, but she’d never want the life of a real princess, with all its pomp and politics. Knowing they can never have a future together, she slips out of his bed and back to reality, where she belongs. But Vittorio discovers the deception and kidnaps Mia back to his palace, demanding she be his mistress until the real princess appears. Despite her attempts to stay aloof, Mia soon learns there’s more to the prince than arrogance and attitude, but now she’s in danger of falling in love with a man she can never have.

I'll be sure and let you know as soon as it's available.

It sounds amazing. I can't wait to read it. The cover is pretty awesome too.