Every romance reader wants a man who acts like a real man. No heroine or reader wants a wimp—a simpering man asking permission. We just want him to take, but in a nice way, while delivering a bad-boy, toe-curling smile. Right?

What if he broke his hand and shed a tear over it? Hells to the no! We want our male leads to be tough. I mean, they don’t have to grin with a Buick parked on their chests, but they need to talk the talk and walk the walk.

Cowboys and country boys fit this tough guy image pretty well. Ever see a farmer who is a weakling? A cowboy who can’t wrangle his cattle? A logger who fails to make a tree fall at his command?

These men live in my fantasies, which is why I write them. I also write what I know. Men in my life chop wood. They don’t hire anything done—from fixing sinks to grading their driveways. Also, a tough guy isn’t going to lie on his back in bed and let his gal do all of the work.

In my latest release HARD RIDIN’, Jens and Holden take control of any situation, especially when it comes to their ranch and to their girl Laurel. And yes, even when they are wearing their hearts on their western shirt sleeves. Read on for an excerpt from HARD RIDIN’. 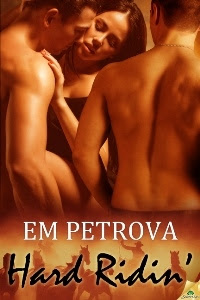 Jens swung the hammer with all his might, driving the nail into the loose barn board. Frustration mounted in him. Laurel had been gone for hours. He burned to drive up to her place, but was terrified he’d find the house empty and a “Dear Jens” note on the kitchen counter.

Except there would be a “Dear Holden” note too.

“F***.” His muttered curse sent the free-range chicken near him skittering off. The head of his hammer drove into the nail again, and the spike buried into the wood sunk a fraction deeper than the surface.

Maybe Jens had been all wrong to suggest Laurel be with them both. Would she hate him for it? If he couldn’t even claim her as a friend anymore…

The hum of an engine made him jerk. He yanked his head out of the barn and peered toward the direction of the sound.

His heart in his throat, he glimpsed Laurel’s ATV chugging around the bend in the driveway. The hammer fell from his lax fingers and it struck the top of his boot. Pain ricocheted up his shin.

“Damn!” He hopped out into the open, ready to intercept her and beg her forgiveness. Ten apologies tumbled through his head. Stupid, never listen to a smitten cowboy, don’t blame you for walking out, go ahead and smack my face.

The cattle gate slammed shut and Holden appeared too. Across the yard, Jens met his gaze. Ire mixed with a sinking sensation. Here was where one of them knew victory or both lost. Because Jens was certain Laurel wasn’t going to jump at his suggestion.

He tightened his hands into fists and went out to meet her as she drew to a stop. She cut the engine and climbed off. He tugged off her helmet and hung it on the handlebars. “Thank you,” she said without looking at him.

Holden came forward too, and suddenly a solidarity rose up between him and Jens. They were fighting on the same side at the moment—fighting to keep her here and for a chance.

Laurel drifted away from them. The lines of her back were rigid, and her loose hair fell forward to conceal her face. Jens swallowed hard against the lump that formed in his throat. Two months together wasn’t long, but in his book, it was a commitment. He’d never wanted anyone this way, and judging by Holden’s pained expression, he hadn’t either.

Jens and Holden exchanged a look.

Finally Laurel faced them. She looked from Jens to Holden, her face shivering with some emotion Jens couldn’t understand.

Holden shifted from boot to boot.

“And… I’m not ready to give up either of you. I don’t want to stop seeing you, Jens. And Holden and I have had something from the start.”

Those words, “Holden and I have had something from the start” ripped through Jens and speared him with jealousy. Holden had her first and for longer. Did that mean he knew her better?

Jens sucked in a shaky breath. The cool air steadied him. “Yeah?”

Her gaze flashed to his, caught and held. In the depths of her dark eyes, he saw a secret glint that sparked just for him.

Heart thudding, he took a step toward her. As if mirroring Jens’s actions, Holden did the same. Not to be shown up? Or were they truly so alike?

Laurel looked down at her twisting hands. “Yeah, I’ve decided to…take you up on your offer. If you’re still willing.”

A stupid grin broke over Jens’s face. Relief flowed to his fingertips and numbed them. I’m more than willing.”

She returned his smile and that spark between them increased.

Nodding, she fixed him in her gaze and something passed between them too—a passionate flare that caused Jens to look away or be blinded.

“So now what?” Her whole body seemed to yearn for them. She leaned forward on her cowgirl boots, and her curves strained against her clothes.

Jens mentally tossed her into the nearby hay pile and stripped off everything she wore but her boots.

Thank for reading, and a big thank you to Natasha, for hosting me today!

Em Petrova
~where words mean so much more~
www.empetrova.com

Welcome to FR, Em! Glad you could be with us today :)

I am definitely with you on the 'guys gotta be guys' thing. I don't know if I feel as strongly about it in real life, but in a romance, no betas land on my keeper shelf! Great excerpt!