This is a continuation of last week's post about Drum Castle in Aberdeenshire, Scotland. 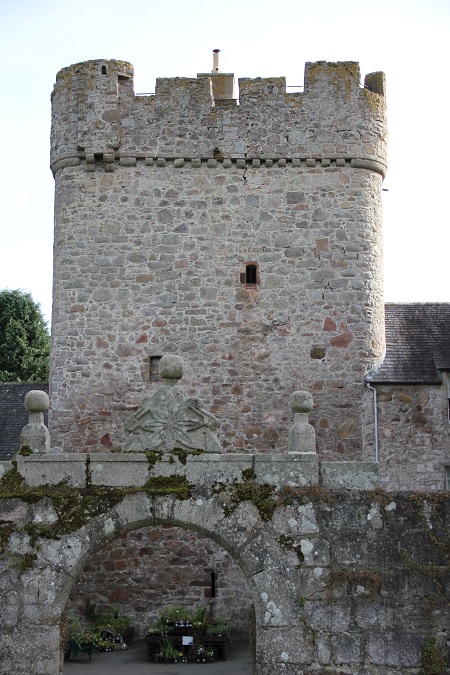 The Tower at Drum Castle is one of the three oldest tower houses remaining in Scotland. The tower was completed in two building phases. The lower part of the tower was constructed early in the 1200s. And the upper portions in the late 1200s to early 1300s.

What was originally the Common Hall, or the second level up from the ground, was turned into the library in the 1840s by the 18th laird with the entrance from the Jacobean portion of the house. When you enter the tower via a modern set of steps on the south side you will see a blocked doorway that used to lead to the Common Hall. The tower used to be entered from the ground via a ladder that could be pulled inside in the event of an attack. This made the castle much easier to defend. Click here to see the east side of the tower. The big window is a later addition and is in the current library.

The bottom floor is the Store Room. The walls here are twelve feet thick and the windows are arrow slits. The well is down here too and it now drains to the exterior of the castle. This room was used mainly for storing food.

The Upper Hall is above what used to be the Common Hall. This room is 35 feet by 21 feet and the ceiling has a beautiful pointed barrel arch. The walls are six feet thick. This portion of the tower was built during the second building phase. It also has a big open fireplace.


Originally this room was divided into two levels. The lower one, where the warm fireplace and window alcove was, for the laird’s private hall. I enjoyed sitting in this window alcove, looking at the wonderful view out over the grounds. 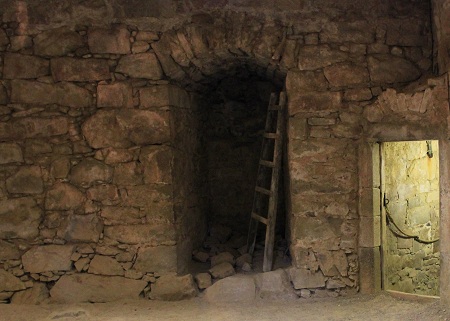 The upper floor that used to be in this room was reached by a wooden staircase. This was divided into two rooms by partitions for the family’s sleeping quarters. Access to the caphouse on the roof was also reached through here.

The view from the battlements is spectacular. You can see the Forest of Drum and the surrounding countryside and farms in the distance.

In medieval times, the battlements was the 6th storey of the tower, where the roof is now. The castle guard would’ve stayed and perhaps lived in the caphouse. The stepped parapet walk is for drainage. The high battlement walls are designed with niches so the archers would have a good foothold when shooting attackers on the ground, close to the wall. This is considered a rare architectural features of Drum, along with the garderobe on the roof for the guards.

Some of the narrow stairs and ladders to get up to the roof are tough to navigate, but it is worth the climb.


This was one of my favorite days in Scotland. It was amazing being able to explore one of the three oldest tower houses left standing in Scotland.

Hope you enjoyed this little visit! Next time we will explore more of Drum Castle
Thanks!
Vonda
www.vondasinclair.com

Simply amazing pictures!!!! I bet it was so exciting!!!! I love seeing the different eras all in one castle.

Thanks so much, Eliza! It was wonderful getting to see and tour such an old building!

love the detail on the slate roof. That will be there long after we're gone. Wonderful pictures.

Fascinating! Booking a trip to Aberdeen very soon. Thanks for sharing these wonderful photos.
Lyn

Great! I hope you get to visit Drum, Lyn. It's one of the most fascinating castles in this area. The wonderful Dunnottar is not too far away from Aberdeen too. I also loved Crathes. Have a fantastic time!
Thanks!

I loved this, Vonda! Thank you for sharing.

Another fabulous post, Vonda. Your photos of the castle are amazing. I love the details you were able to capture. Now I may have to add Drum Castle to my already too-long list for my trip in May!

What a tour, Vonda. I'm thinking Scotland should be hiring you for a photographer, or maybe your second career (for in your spare time not instead of writing)you should work for National Geographic.

Thanks for checking it out, Gerri!!

Margaret, thanks! I'm glad you liked the pics. I think you would love Drum Castle and I hope you have time to visit it.

Paisley, that's very sweet of you to say! Thanks!! I love taking pics.

Wonderful pictures. I like how the Scottish castles are different from the English and French. I tweeted.

What an amazing place. Thanks for the castle tours, Vonda!

Thank you for sharing, like Margaret, I am visiting in May and Drum is one of many on my list. I can't wait!!

Thanks, Ella! That's true, they are really different.

Thanks so much, Vanessa! You would love it!

Amy, awesome! You will have a wonderful time in May!