Fairytale Reboot - The Better to Eat You With

Every so often, I like to post a teaser from my backlist. With so many new takes on old fairy tales (anyone see Hansel & Gretel - Witch Hunters? Looking forward to Jack the Giant Slayer? Hooked on Once Upon a Time?)this twist on Little Red Riding Hood might be just what you're looking for.

Well, The Better to Eat You With, my little fairy tale romance has no action heroes, no violence, no evil queens or giants. It's a second chance at love romance, and I don't know about you, but I love those stories. 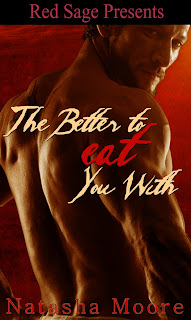 Did Red Riding Hood get the story wrong when she said her grandmother had been eaten by a wolf? When Nicholas Wolfe surprises Elise at her lonely house in the forest, she decides to use him for sex like he did with her before he left years ago. They didn’t want the same things from life back then, but Wolfe is back to convince Elise to give him another chance.

She froze as a smooth voice she’d not heard in many years washed over her skin like a cool rain. Nicholas Wolfe. Her eyes flew open and she saw his tall, broad, masculine figure silhouetted against the late morning sun. Where the hell had he come from? Then she realized that while she’d hidden herself from her neighbors, she was in clear view of the driveway. Shit, she hadn’t even heard him drive up.

His gaze burned into her, sweeping over her from head to toe. Of course, he didn’t have the decency to look away after catching her in such an awkward position. He still didn’t care about her feelings.

Her heart pounded, her cheeks burned. From embarrassment. From anger. From desire, dammit. She resisted the urge to snatch up the T-shirt to cover her naked breasts, to pull down the skirt to cover her drenched panties. It was too late for modesty now. Besides, she didn’t want him to know he could still affect her. Not after all this time.

She made herself sit up slowly, as if this was the natural way to meet an ex-lover. She shaded her eyes with her hand to get a better view. He still wore his dark hair long, still sported the hint of a beard even this early in the day. Elise remembered the way its roughness used to scrape against her skin when he kissed his way down her body. Why the hell did Nicholas Wolfe have to turn up when she was at her weakest?

He was still staring at her as though he hadn’t lost the right to see her like this a long time ago. But damn if her nipples didn’t prickle beneath his gaze. The fact that her body would betray her fueled her anger more than his arrogant ogling. But she had to make him think she didn’t care one way or the other. He meant nothing to her now.

Squaring her shoulders, she gathered the strength she would need to deal with this man. “Mr. Wolfe.” Her voice sounded tight. Her heart slammed against her ribs.

He took a step closer and she could almost see his eyes. Those dreamy, bedroom eyes that had seduced her every time. “You used to call me Nick.”

“Ha. I never called you Nick.”

Another step closer. “True. But you never called me Mister.”

If you'd like to read more about Elise and her Wolfe, The Better to Eat You With is still available for your enjoyment.

By Natasha Moore at February 25, 2013
Email ThisBlogThis!Share to TwitterShare to FacebookShare to Pinterest
Labels: backlist, Natasha Moore, The Better to Eat You With