Today we have special guest, T.J. Brown revealing the beautiful new cover of her upcoming book, Summerset Abby, to be released from Gallery Books in January, 2013. The book is available for preorder at Amazon. 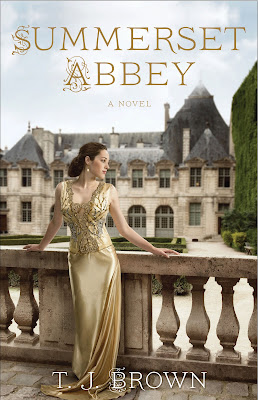 Teri Brown is proud of her two children but coming in a close second is the fact that she parachuted out of a plane and beat the original Legend of Zelda video game.  She is a word scribbler, head banger, math hater, book reader, rule breaker, food fixer, novel writer, kitty keeper, and city slicker. Teri lives with her husband and way too many pets in Portland, Oregon.

Reminiscent of Downton Abbey, this first novel in a new series follows two sisters and their maid as they are suddenly separated by the rigid class divisions within a sprawling aristocratic estate and thrust into an uncertain world on the brink of WWI...
Rowena and Victoria, daughters to the second son of the Earl of Summerset, have always treated their governess’s daughter, Prudence, like a sister. But when their father dies and they move in with their uncle’s family in a much more traditional household, Prudence is relegated to the maids’ quarters, much to the girls’ shock and dismay. The impending war offers each girl hope for a more modern future, but the ever-present specter of class expectations makes it difficult for Prudence to maintain a foot in both worlds.


Vividly evoking both time and place and filled with authentic dialogue and richly detailed atmosphere, Summerset Abbey is a charming and timeless historical debut.

Beautiful cover, Teri! I'm so excited for you, for this book and where your writing career is taking you! Congratulations, my friend!

The Edwardian Era is a wonderful era--the beginning of the modern century. So, what kind of research did you do?

I love th4e cover and great interview. Your book sounds wonderful. Can't wait to read it. Good luck with it.

The cover is lovely! Good luck with the book!

Love the cover Teri! Can see myself curled up with drink in hand reading...Exciting times~~ Congrats!