I did something I said I would never do a couple of days ago. I opened a Twitter account. It’s not that I have anything against Twitter. I just don’t get it. Facebook, I get. MySpace—even though I no longer use it—I get. Twitter? A big ole black hole of WTH?

I’ve messed around with the application for a couple of days now and still don’t understand its purpose or how to use it. I’m following somewhere around 50 people right now and my thread thing is an unholy mess. How do you keep up? How do you organize it? Am I supposed to sit there and scroll through the page every time I visit?

I know the Facebook post thread is horrible. But at least there I can organize. I have people grouped into categories, so with one click I can see what my in-person friends and writer friends are up too. It works really well for me. Can I do something like this with Twitter?

I’m going to have to suck it up and learn. Carina Press uses Twitter for promos and that is the only reason I opened one. I'm not crazy, I'll use every means I can to promo. Who knows, maybe I'll learn to love the application. But right now I stare at it with a perplexed expression. I really could use a Twitter 101 course. So any advice or tips would be greatly appreciated.

In other news, I found out I get to choose my excerpt so I wanted to thrown one out there for T 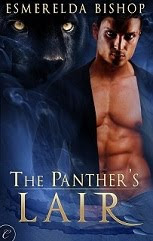 Raimond snarled, and his beast roared to life. With images of Sydney cowering against a corner wall, blood trailing down the left side of her face as the man stood over her, threatening her with his strength and presence, the transformation began.

Bones popped as he bent to all fours; a slick black coat sprouted from his pores. Sydney’s pleas for John to spare her life filled his ears, and rage engulfed him. He raced forward, sailing into the kitchen window with a caterwaul. Shattered glass flew everywhere, and the pair froze.

Sydney screamed, her face draining of any remaining color. The bastard stumbled backward.

Snarling, Raimond placed himself between Sydney and John. His satisfaction spiked at seeing the man who got off on frightening his mate whimper like a weakened fool. But whimpering wasn’t enough. This man had made her fear for her life, made her bleed.
Raimond lunged forward and pinned him to the ground. He brought his whiskered face close to the other man’s, letting his mouth open to show his sharp, feline teeth. John’s face whitened, and he screamed in manic shrieks.

The only thing keeping Raimond from ripping the man’s throat out was knowing Sydney was watching. He would never leave that kind of image in her mind.

He sniffed the man’s neck. Angry growls rumbled deep in his throat. He wanted to bask in John’s terror, hoped he got a real feel for what it was like to be defenseless, powerless to stop someone stronger. The man squeezed his eyes shut, tears rolling down his cheeks. “Please. Oh God. Please.”

Seeing he’d accomplished his goal, Raimond moved off John just as Sydney bolted from the corner. John snatched her wrist and yanked her on top of him on the floor as he pushed backward into the corner, holding Sydney between his legs as a shield. Raimond hissed, baring his teeth. Her gaze dropped to his canines. Violent tremors shook her body, and tears shone in her eyes. “Please don’t hurt me.”

The agony of her ever thinking he could hurt her, even in this form, made him cringe. Her terror erased his vengeance, and he meekly lowered to the ground, resting his head between his paws. John shoved Sydney forward. Screaming, she landed hard on her stomach, her face inches from his paws. John surged to his feet and flew into the kitchen. It took everything in Raimond not to go after him, but Sydney’s trembling frame kept him planted. No more horror for her. None. They knew who the assailant was, and the police would be called. In the submissive pose, he didn’t move a muscle, waiting for her to understand he wouldn’t hurt her. Slowly, she lifted her head, and they stared at each other, nose to nose.

LOL Esme, you made me laugh with this one! It's how I feel sometimes. Hubby loves Twitter, but I'm a Facebooker through and through. It's just a different way of thinking and there are just different capabilities. I've gotten better at it, but it's still not as intuitive to me as FB, even though FB can be a regular pain in the rear sometimes, especially with their privacy concerns. As for MySpace, I tried it twice, but I never seemed to catch on to it and never really added any friends there. FB is much easier for me. I'm like you though. I'll try anything for promo. I'm glad I'm not the only one who struggles sometimes with Twitter. Good luck, and thanks for the giggle. hee hee

You can create lists on Twitter, and then click on the link for your list in order to see tweets from only those users, Esme. Also, you can link your Facebook and Twitter accounts if you want, so if you post a status update on Facebook it will post it to Twitter or the other way around. It can save time, if you want to post the same information to both places. Twitter is more fast moving, but I've found it can be a great resource for connecting with other writers and publishing industry types. People link to a lot of blogs that can be interesting and informative. You just need to be sure you're following people who give the kind of information you want to read.

EB, I'm addicted to Twitter like "whoa," but I might not enjoy it as much without TweetDeck. You should try it instead of the Web version. But in the interest of full disclosure, I work from home and live alone, so some days talking to friends/coworkers on Twitter is the only conversation I have during the day. It'll either grow on you, or you'll break up with it like I did MySpace.

Updated to add: I don't like that this Web site makes it known that I deleted my own post bc I found a typo in it. What ever happened to secret shame?

Catherine--Thanks for the tip! I'll have to do that.

Kym--I'm going to have to give tweetdeck a try. I work full time from home too. I don't even leave this apartment for days at a time. So I totally get social networks being a means to outside human connection, lol. Loved the shame edit. lol.