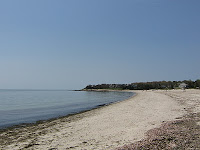 Last weekend I went down to Cape Cod, a long island off the coast of Massachusetts. I thought I'd share some pictures. This is a typical Cape beach, maybe not as grand as some fancier beach paradises, but the atmosphere is relaxed and family-oriented.

This particular beach is where the movie "The Lightkeepers" was filmed (starring Richard Dreyfuss). I can't say I've seen the movie, but my sister and her family watched them filming it. They snuck onto the beach by muttering "Crew" to the security guard. Amazingly, it worked.

President John F. Kennedy saved a large section of the Cape beaches by establishing a park, the Cape Cod National Seashore on the outer Cape. The park has 40 miles of continuous 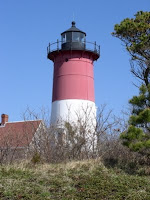 beach and is a well loved and well-protected seashore. Except for the ocean, which continually eats away at the land. This is a picture of Nauset Light, one of the many lighthouses dotting the Cape. Most of them have been saved and renovated by private and federal funds. This particular lighthouse had to be dismantled and moved when the encroaching sea threatened its stability. 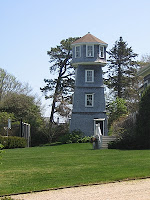 Speaking of lighthouses, they are a well-known architectural theme on the Cape. I took this picture of a fake lighthouse right near the beach. (It's part of a private residential property.)


The Cape Cod of my childhood was a laid-back, friendly and uncrowded summer paradise. Lobster, clams, corn on the cob, and ice cream were the four food groups. Your beach pail, the sand and the water were all you 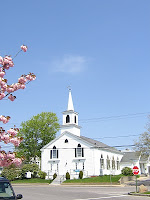 needed for a perfect day.

Things have changed and the Cape bustles almost year round today. But there are still some oases of calm.

Once I posted a picture of an airport and asked if anyone could identify it. Someone did. So can anyone tell me in which town the beach (top of the blog) and the church in these photos are located?
By Carly Carson at May 05, 2010
Email ThisBlogThis!Share to TwitterShare to FacebookShare to Pinterest
Labels: Cape Cod, Carly Carson, Dowses Beach, Nauset Light

Beautiful pictures, Carly! I love natural beaches like these. Fortunately the Outer Banks in NC also has a long stretch of protected beach. I also love lighthouses! I'd love to visit Cape Cod one day.

The beach and church are located in Osterville. It's Dowses Beach and Osterville Baptist Church. You can tell it's Dowses by the lifeguard towers and the pink shells in the photo--which means it was taken down by the jetty. The church is on Main Street and it's a great shot of it.

Enjoyed your pictures and write up.

Hey Anonymous, thanks for correctly identifying the location! Someone always does (though I waited a while for this one). Since I wrote this post, they made another movie in Osterville, summer or 2011. I think Adam Sandler was in it. My sister rented out her house to the director for big bucks.