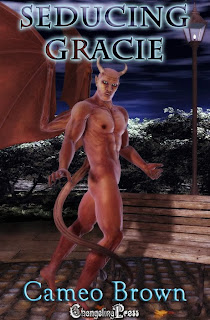 It's all about me! LOL

Seriously, I just wanted to shout out that my latest novella, Seducing Gracie, is now available from Changeling Press. The description is below...

NYC detective Gracie Usher sets out to find a lost child and ends up in the arms of a demon whose bloodlust can only be satisfied by a sacrifice every five years -- or by a woman whose desire is as insatiable as his.

When Detective Usher stumbles into Wayland, New York, looking for a prominent business owner's young daughter, she finds instead a horrible beast who wants not only her blood, but her soul. Giving in to his desire would be much easier if she were a mere mortal, but Gracie's a different kind of human. Logic is her best friend and leading with her head, not her heart, is what she does best, at least until she meets a demon who decides he won't be complete until he makes her his... for eternity.

I mentioned it a couple of weeks ago, but now it's available. It's darker than I normally write. However, it is, at it's core, a story about two people, er, creatures, needing each other. They come together by accident, but discover they both have something the other needs or wants.

Isn't that how love is sometimes?

I wanted to write Gracie's story because I liked the idea of someone who depends on logic being faced with the ultimate in illogical. How would she react? What would she do? What would YOU do? What if everything you've ever known to be true suddenly seemed to be upside down?

I'm now into the sequel to Seducing Gracie and loving it. Taming Lucy is the story of Gracie's partner, Rick, and Sam's sister, Lucy, who is a succubus. New York City should be her playground, but when she joins her brother in the human world, she's a fish out of water. Satisfying a man's desires, she discovers, won't endear her to the one mortal she's grown to tolerate, even care about. Rick, try as he might to be a scoundrel and live up to his hard-earned reputation as a ladies' man, just can't pull it off with Lucy. The truth is, he really likes her and realizes that to win the woman he loves, he's going to have to tame a hellcat.

Could anything be more perfect? Sigh...

Happy Reading!
By Cameo Brown at May 20, 2010
Email ThisBlogThis!Share to TwitterShare to FacebookShare to Pinterest
Labels: Cameo Brown, Seducing Gracie