Writing in a Construction Zone 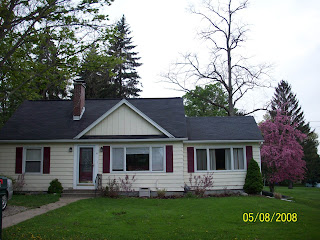 We bought a house a couple years ago, a former cottage, half a block from a beautiful lake. The house was originally built in 1948 and has been added onto a couple times. There are many things I love about this house, the fireplace, the open floor plan, the view of the lake from the back yard - but the bathroom is not one of them.

As in many small older houses, there is no master bathroom, but the bathroom is right across the hall from the bedroom, so it's not really a big deal. There was a second bathroom installed in the basement along with a small bedroom, so when our son is home from college, he uses that one. Since we decided to remodel our main bathroom, we'll be using the basement bathroom too.

Oh, and I forgot to mention what I dislike most about the main bathroom - besides the ugly closet with doors made out of old shutters...and the full-sized window in the shower that looks out into the neighbor's backyard...and the dark gray walls - is the fact that it's barely big enough to turn around in. So in addition to tiling the shower and installing a heated tile floor (oooooh!)we've decided to bump out a portion of one wall and move the vanity back so that you can actually turn around when you get out of the shower and want to dry off. 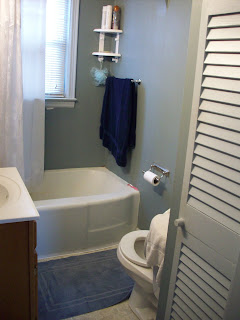 Did I mention that the room we're going to be bumping into is my office?? As I write this, my husband is pounding into the cement walls in our shower. (Have you ever heard of cement walls in a shower? We never had. Apparently it used to be quite common so you could paint your whole bathroom the same color and not worry about water damage in the shower. Yeah, the whole bathroom was the same dark gray color! My husband had to strip at least five coats of paint off the walls to get it ready for the tile.) 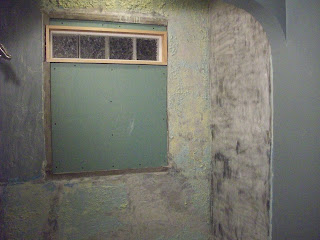 No matter how loud I have the music turned up in my headphones, there's no way to drown out the hammering and drilling.

I emptied out the medicine cabinet today, because this week he's going to be cutting into the wall between the bathroom and my office to move the vanity. We used a couple bookshelves to make a temporary wall between that wall and my desk, but honestly, it's not going to make much difference in my working conditions.

I have to resign myself to the fact that I may not make my word count for the next few weeks. Not just because of the noise and the dust, but because I always become a go-fer for the hubby. Not that I don't appreciate the fact that he can do a lot of the construction work himself. But I actually can't have that music turned up loud enough to drown out the construction noise, because I have to be able to hear him when he needs me.

So has anyone gotten much writing done in a construction zone? Any helpful hints you can pass along to make the process easier?

I know I'm going to be so happy with my larger, brighter bathroom. Just bear with me during the next few weeks...I may be a little cranky.

Can you go elsewhere for a few hours, or is your help critical? I live in a permanent construction zone in my neighborhood. The people directly across the street are starting a big construction project this week. I dread it. The house next door to them was torn down and rebuilt last year and that project took more than a year. I guess I'll have to be grateful they aren't right in my house! Those trucks that beep when they back up? Torture!

Like Carly I would say to go elsewhere to write, a library or coffeeshop. But if you have to be a go-fer all day that would seriously put a damper on the concentration (for me. When my husband builds something I'm the go-fer too. LOL) I bet your new bathroom will be beautiful!

Hi Carly and Nicole, thanks for chiming in. My problem is that I'm away all day at the day job, so I only have a few hours at night to write (and do laundry and cook and clean and play go-fer) Hopefully it will only be a few weeks and I know the outcome will be worth it. Remind me of that when I start complaining :)

I would have to get away from the noise in order to "get into" the fictional world for writing. White noise is fine, but the level of din your dealing with probably means heading to a haven away from home. Even when doing papers for college or homework in grade-middle school, I couldn't fully concentrate with much background noise interrupting.

Best wishes on the bathroom project and can't wait to see the end result! Here's to happy and productive writing days for you, too!

Blessings for the holiday and beyond,