Finding Love on a TV Show 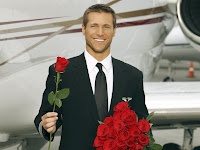 Can you really find love on a TV show? For the first time ever, I watched The Bachelor this past season. I had, of course, heard of the show before and had seen its contestants here and there, including Melissa Rycroft on Dancing with the Stars, but I had never watched the show in its entirety before. (DVRs and Hulu are wonderful inventions, or very dangerous distractions depending on your perspective!)

The Bachelor, Jake Pavelka, was good looking, had a great body, and was a pilot. Huh? So why would he need a TV show to help him find the woman of his dreams? You would think some loser writing blogs in the basement of his parents’ house would need this show more than Jake. Right away I’m suspicious. The dude must be doing the show for fun—you know, to go out with 25 attractive women, to go on cool dates like bunging jumping (if that’s your idea of fun), getting a private concert by Chicago, taking a road trip up the coast of California, and hanging out on the beautiful island of St. Lucia for a few weeks. What’s not to like?

I had the same thoughts about the women on the show vying for Jake’s attention. They didn’t really believe they’d find love by competing against 24 other women, all of them living in the same house as they’d come back from dates with Jake, did they? I figured they must be doing it for the fun too and probably a little exposure—or a lot of exposure considering some of their outfits! Several of the women were “models,” which further heightened my suspicions.

Week after week, I watched Jake go on dates telling all of these women how “amazing” and beautiful they were, only to dump them at the end of the show. I got so sick of hearing Jake gush about “this amazing journey.” He used every cliché known to mankind ad nauseum. After a while, I realized that Jake might really be telling the truth about his inability to find a life partner. I mean, the guy was annoying ME and I wasn’t even dating him.

In the end, it came down to two women, Tenley and Vienna (doesn’t anyone have normal names anymore?). Vienna was the woman everyone loved to hate…except Jake. Tenley was sweet, so sweet she made my teeth ache. After Jake told Tenley on their last date that he just didn’t feel that “magic spark” with her, I knew it was all over for Cinderella. She kept pushing him for an explanation. “You mean you don’t feel a physical, sexual connection.” Jake looked panicked. “Noooo,” he lied. Of course, that’s what he meant. If Tenley had been smart, she would’ve packed her bags and left St. Lucia right then and there. But she stuck it out only to be disappointed in the end, and Vienna, the “bad girl” got her man.

Will these two stay together forever? Who knows? A few previous couples on this show have actually gotten married, so it obviously worked for them. However, it turns out that our man Jake is now a contestant on the new season of Dancing with the Stars. Hmm, there goes my hinky meter again. Then I found out that Jake was on another reality show prior to The Bachelor (as well as being a contestant on The Bachelorette). I don’t think this guy wants to find love—he’s already found love…with himself!

So what do you think? Can two people find love on a dating show? Would this make a good plot for a romance novel?
By Carol Ericson at March 11, 2010
Email ThisBlogThis!Share to TwitterShare to FacebookShare to Pinterest

I've watched snippets of the bachelor but I've never watched an entire show or an entire season for that matter. I rather get lost in a fictional romance novel than wonder if what I was watching was non-fiction.

Amy, I think a lot of The Bachelor IS fiction. But I like the heroes in romance novels a lot more than I liked this bachelor!

LOL! Great post, Carol! I've watched The Bachelor/ Bachelorette for a few seasons now. I think it's insane and goofy sometimes but I'm still addicted to it. :) For one thing they've started those cliffhanger type situations where one well-liked contestant who was kicked off the previouis season comes back to be the main focus the next time around. I think people can find love on a TV show, but it doesn't work most of the time. Sometimes I'm like: what were they thinking to choose him/her? I got tired of all the cliched phrases too by the way. They must be given a script or tip sheet. LOL Plus their grammar is horrible. "Jake and I's date was fabulous." Huh?? I's head is hurting now. Sigh.

Nicole, it is somewhat addicting. And, OMG, you're so right about the grammar - I heard "Jake and I's" about ten times on there, including from the winner. I think he pretty much based his choice on lust not love - LOL.