Series That Keep You Wanting More 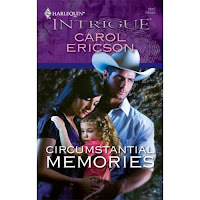 I have to admit, I'm a sucker for series. I've gotten caught up in two series by Eloisa James, the Essex Sisters series with the delightful Shakesperean titles, and more recently the Desperate Duchesses series. James does a great job of weaving the stories of subsequent books into the current book, so you can't wait to read the next one. Even a series of two works for me. I read Jennifer Haymore's A Hint of Wicked, and I'm looking forward to A Touch of Scandal coming out later this month so I can find out what happens to a character from the first book.

I wrote my own series for Harlequin Intrigue, The McClintock Brothers. It's funny, when I wrote the first book in the series, Circumstantial Memories, I didn't have a series in mind until the hero of that book decided he needed two brothers. So of course, I had to tell their stories, and then lo and behold, an illegitimate brother popped up for the McClintocks. The second book in the series, The Sheriff of Silverhill, came out in Jan. of this year, and the remaining two books, The McClintock Proposal and A Silverhill Christmas, will be out in Sept. and Dec. of this year.

With the McClintock series finished, I'm embarking on an adventure with another four men who will be keeping me company for the next year. My Harlequin Intrigue series, Brothers in Arms, will consist of four books - all 2011 releases. The brothers in question aren't related but they served in a military covert ops team together. Now one of their own is missing and suspected of treason. To be sure, they'll stumble across lots of love, danger and adventure as they search for their missing buddy.

Do read series? Are you ever disappointed in the subsequent books? Sometimes the waiting is the hardest part. I've read books 1 and 2, The Hunger Games and Catching Fire, of Suzanne Collins' YA series and she's writing a third - and I just can't wait!
By Carol Ericson at March 18, 2010
Email ThisBlogThis!Share to TwitterShare to FacebookShare to Pinterest

I love series...unless I discover it around book 3 or 4 - then I really have to want to read it in order to hunt down the first couple so I can read them in order.

Congrats on your new series :)

I'm a lover of series! It is so wonderful to read a book and then realize the author is publishing a book about one of the secondary characters. I like to revisit characters from the past and see how their "happily ever after" is really going.

Nicole, I'm easily hooked too! The authors must be doing something right.

Natasha, the most incredible series I ever read was Phillipa Carr's (aka Victoria Holt/Jean Plaidy) Daughters of England series - something like 25 books, beginning with Tudor England all the way to WWII. Each successive book had the daughter or sometimes the sister of the previous heroine. In the next book or two you'd find out what happened to the previous couple, and it wasn't always happily ever after for them. I started in the middle of that series and had to go back to the very beginning, and believe me, those books published in the 70's and 80's were not always easy to find! But I read every one of those books. Loved that series - starts with Miracle at St. Bruno's.

Buffie - I agree. Sometimes those secondary characters just jump out at you and you really them to have a HEA!