Me Tarzan. You Jane.

Let me start by saying I can definitely read maps so I was a little offended by the title. But after they explain what they mean…I’m sold.

However, today I’m talking about the men not listening part, which also relates to men not speaking a lot, which is something I’m always conscious of when writing male characters.

The differences start young. Girls start speaking at an earlier age. Studies show that 3 year old girls have twice the vocabulary that boys do. Anyone who has teenage boys and girls knows which sex does the talking.

The authors say there is no convincing evidence that social conditioning explains why girls talk more than boys. My husband says our girls talk just to hear themselves talk.

What happens when we reach adulthood?

When men are focusing on a problem, they prefer to remain silent while they think about it and, inside their heads, examine the issues. When women have a problem, they usually prefer to talk it over, examine all sides of it, and then verbally reach a consensus on a solution.

Women may not even expect to find a solution when they are talking about a problem. They may want to vent, get some sympathy, or express their feelings. Men assume you’re laying out the problem to obtain a solution.

Women have five tones in their voices while men have only three. (Ever heard a man grunt when you’re speaking to him?)

(Men do have other skills which are harder for women to master. Also due to brain differences. But that’s for another blog.)

One of the main things I try to remember when writing male dialogue is: keep it brief and focused. No meandering thoughts or explanations for a man.

So when Jane and Tarzan meet in the jungle, here is their conversation:

Jane: At last…It’s Him!! Tarzan. The man of my dreams…coming to get me…to make me his woman!

It's a good book. 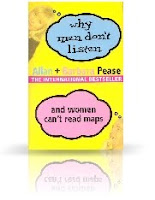 http://www.carlycarson.com/
By Carly Carson at March 24, 2010
Email ThisBlogThis!Share to TwitterShare to FacebookShare to Pinterest

Love this! So right on. Sometimes it's like men and women are two different species. lol I tend to make my heroes speak much less than the heroines. Even make some of them grunt a little because it just seems to fit. :)

First, kudos on the Gerard pic. I love Gerard (ask Nicole, she'll tell you), he can grunt at me anytime. =)
This was a very interesting post. I may have to add that book to my pile of things to read.
I had to laugh when you asked about having a man grunt in response. Just the other day, I was talking to my boyfriend. We were talking on the phone and all of a sudden he went oddly silent. I asked a question and his response was a nice loud grunt. Something on TV caught his attention and he didn't hear a word I said. LOL

But I do try to minimize the science. It's not entertaining to all!

Cameo, After reading this book, I think you nailed it - 2 different species.

Casey, I think Gerard makes a nice Tarzan, lol. Your bf's reponse is also outlined in this book - males are single task beings (he can't watch tv and listen to you) and women are much better at multi-tasking. Maybe another post someday!

Carly, my boys (12 and 14) tell me that they like it when their dad picks them up from practices because he'll say, "how was practice?" and they'll answer, "OK." They complain that when I pick them up I ask a million questions: "How was practice?" "Who was there?" "Did you scrimmage?" "Did Coach say anything about the game last Saturday?" "How's your foot/leg/heel/head?" "Did you have enough water?" "Who were you talking to?" And on and on and on! LOL Drives them nuts.