As promised, it’s time for the mystery places to be revealed. Thanks to all who posted guesses as to the locations captured in my vacation pictures. Excellent job, ladies! From top to bottom, the sightseeing spots are: 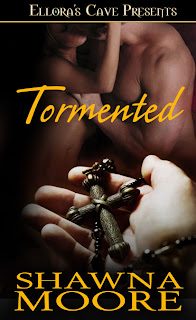 All writers have one or more books of their heart, and TORMENTED is definitely among mine. One of the things I most enjoy about each trip to New Orleans is a chance to admire and study the city’s breathtaking historical homes in the Garden District. Each clang-clang of the St. Charles streetcar’s bell brings back pleasant memories and sets me pondering what might have happened along that historic route in years past. One such day of pondering started me loosely plotting the romantic story that would become TORMENTED. Perhaps it was the whispering of the grass in one of the lush lawns we passed during one of our afternoon strolls when Eve and Charles urged me to tell their fictional tale? Or one of our more playful moments on Decatur Street when my hero and I kissed powdered sugar off each other’s lips after sampling beignets? Without a doubt, our sunset tour of the city’s historic haunts piqued my interest in the paranormal and persuaded me to make this fictional romance one steeped in the same. My heroine finds herself thrust into and left unaccompanied in world entirely different from the one to which she’s accustomed. A world in which one man, a handsome and brilliant physician, lives and researches. A world incomplete until the possibility of true love arises. Charles Galletieré’s tasks – cure a malady that current medical science cannot and gain the trust of a woman who has been repeatedly wronged by the man in whom she once placed the utmost faith.

Sorry I missed your pics, but I've been to The French Quarter, New Orleans once and it was a great place to visit, it was about 5-6 yrs ago.

The vacation pics are still available on my 8/10/08 Fierce Romance blog post, if you want to check them out :)

I agree the French Quarter is a great place to visit. No matter how many times you've been there, there is always something new to see. Thanks for stopping by and sharing your thoughts :)