Friday, June 22 was one of my favorite days of the tour. We left Thurso early that morning, drove to Scrabster and took a ferry out to Stromness on Mainland Orkney. (I love the names of these places!) I had never been on a ferry this large before. In addition to people, it hauled the bus and lots of cars. This ferry was nice with a bar and lounging area, a restaurant, a couple shops and lots of other neat places. 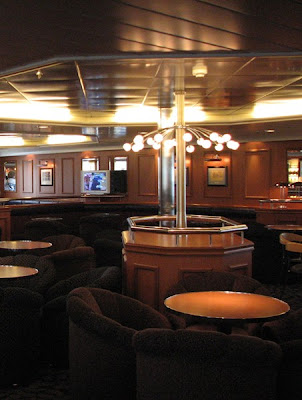 Since my friend and I both have a tendency to get motion sickness at times, we stayed out on deck, the stern, at the beginning of the trip so we wouldn't get sea-sick. It again was very cold and windy but I wanted some clear photos too. I was wearing 5 layers of sweaters and jackets at this point and needed every single one. My rain jacket also served as a windbreaker and the hood was invaluable. 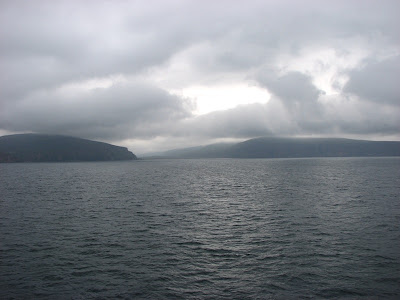 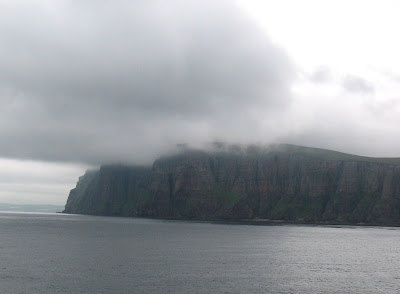 We cruised by the island of Hoy. We saw the Old Man of Hoy and the beautiful cliffs. I loved it! The whole area is simply gorgeous and it seemed we were entering a primeval world. We were out here on one of the two longest days of the year. Summer Solstice was the day before and we were in the most northerly place we would visit. Needless to say, nights were very short, probably only a couple hours of darkness. 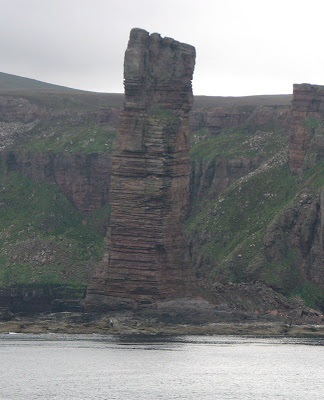 Old Man of Hoy is a beautiful sandstone rock stack rising close to the sea about 450 feet high. Many people have climbed it but they don't know how much longer it will stand before being claimed by the sea. 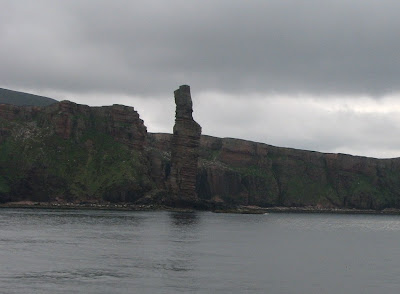 Every view out here was lovely and I took lots of photos. 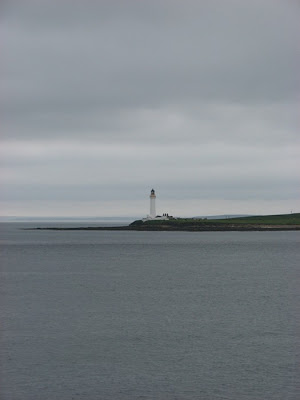 Auskerry (population 5 (2001 census)) is a small island at the east of the Orkney island group. It lies in the North Sea south of Stronsay and has a lighthouse, completed in 1866. The name Auskerry comes from the Old Norse for east skerry. Auskerry is designated a Special Protection Area due to its importance as a nesting area for Arctic Tern and Storm Petrel; 4.2% of the breeding population of Storm Petrel in Great Britain nest on the island. 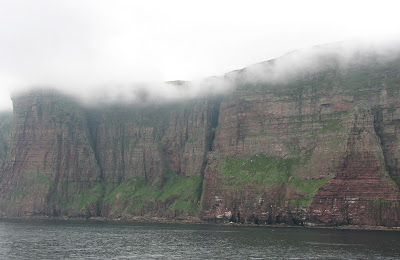 Hoy cliffs in the mist. 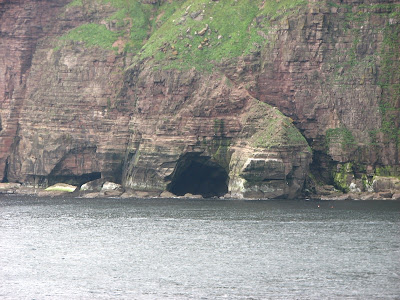 This gives some perspective. See how tiny the boat is compared to the cliff on Hoy? 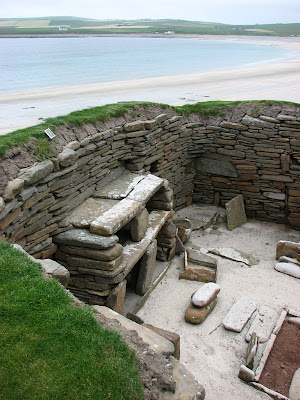 Once on Orkney Mainland, we boarded the bus again, this time with a local guide who knew all about Orkney history. Though I believe the man was English, he now lives in Orkney. Our first visit was to the amazing Skara Brae, the 5000 year old Neolithic village which was unearthed in 1850 during a storm. Experts believe the underground village was inhabited between 3200 and 2200 BC. It is a series of eight dwellings, linked by alleys. Because of the sand which had covered the dwellings for thousands of years, they were well-preserved. 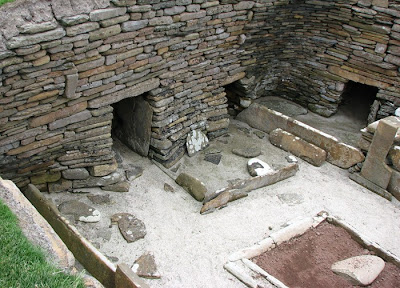 Each home has a central fireplace (shown by the reddish dirt) which is just a ring or square of stones in the middle of the floor, a sort of box bed made of stone on either side and set of stone shelves or dresser on the wall opposite the entrance. 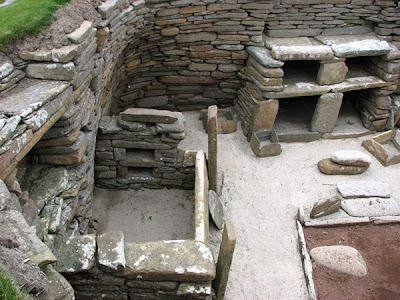 Though Skara Brae now stands right on the edge of the ocean, when people lived in it, the village would've been some distance from the sea. They believe people lived here for about 600 years. It's completely underground now, but back then it would've appeared to be mounds of earth and rubbish with roofs on top. The homes would've likely been warm and comfortable to them in such a harsh environment. The stone box beds would've had mattresses made of straw or heather and blankets of sheepskin or deerskin. Each home also had a drainage system, which may have been an early form of toilet plumbing. They speculate the hearth was the center of the room for several reasons. Fire was extremely important to these early peoples for heat, light, to cook their food. It was likely the center of their domestic life. They had very long dark winters here and the central position of the fire would allow more people to gather around it to stay warm. The roofs of these dwellings likely had a hole in the center to let the smoke out. They suspect these dwellings were not immediately abandoned because of a tragic event, but that they were gradually, over time abandoned as the younger people moved away into more modern housing for the time and merged with larger communities with perhaps more powerful leaders. 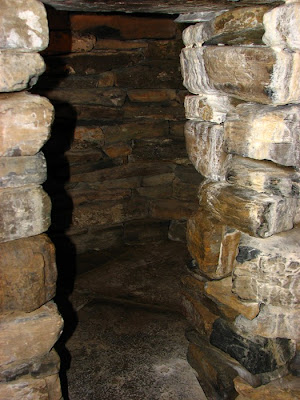 As I was leaving I entered the recreated Skara Brae dwelling. The entry tunnel was very low and narrow. I had to bend and sort of creep inside. The dwelling was dark and interesting, but I could see how it would be cozy with a fire going. 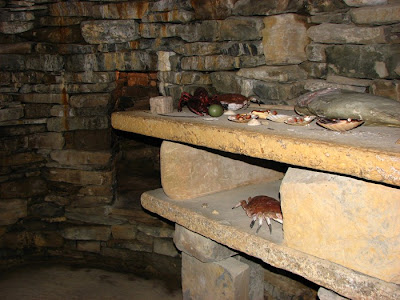 I found this whole site fascinating because I love learning about prehistory.

Next up, another of my favorite prehistoric sites.
By Vonda Sinclair at July 09, 2007
Email ThisBlogThis!Share to TwitterShare to FacebookShare to Pinterest
Vonda Sinclair
Vonda Sinclair writes Scottish historical, paranormal and contemporary romance.

Vonda, I can't imagine experiencing Skara Brae first hand as you did-it must have been a truly incredible experience!!