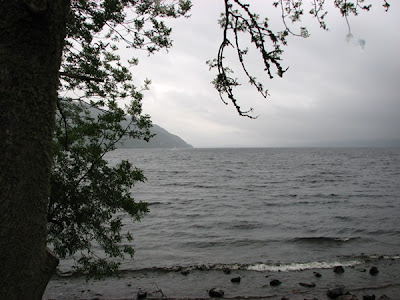 The morning of June 20 it started to rain as we headed toward Loch Ness. The mist hovered low over the mountains and hills. This area is brimming with lush green trees, bushes and flowers. The roads are curvy and the whole setting reminds me of home. I can easily see why Scots immigrants settled in NC, because it reminded them of their homeland. The first view of Loch Ness, which I've wanted to see for years, was beautiful. The fog and rain gave it a mystical and mysterious quality. If a creature like Nessie existed, you could well imagine it slowly coming into view through the mist. 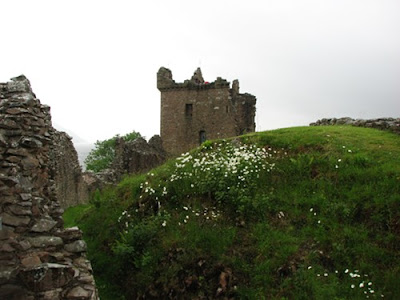 Dressed in raincoats and two or three layers of sweaters, we head toward the visitor center to view the detailed history displays and movie that tells the history of Urquhart Castle and its past inhabitants. Since I had never researched Urquhart, I found this fascinating. Next, we head outside the visitor center and gift shop into the cold rain and wind to go inside Urquhart. Some of our group members complained they wouldn't go out in that. Ha! Urquhart was one of the main reasons I wanted to go to Scotland to begin with so I wanted to spend every possible second around the ruins. 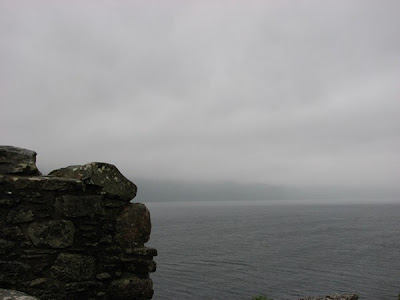 Taking photos with wind blowing the rain sideways is difficult. I had to keep wiping raindrops off the lens. More of the castle remained than I'd expected. Some of it was inside, sheltered and dry. The foundation of the whole castle still remained and it had also been larger than I'd imagined. 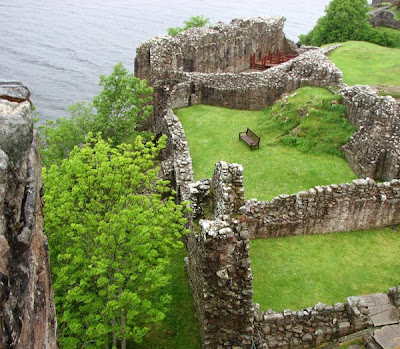 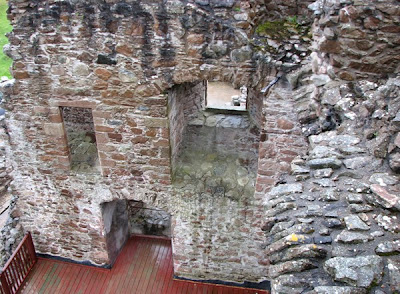 Inside. This section would've been divided by a wooden floor halfway up. 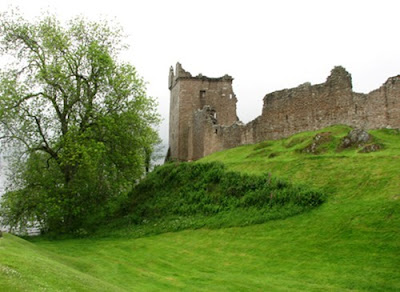 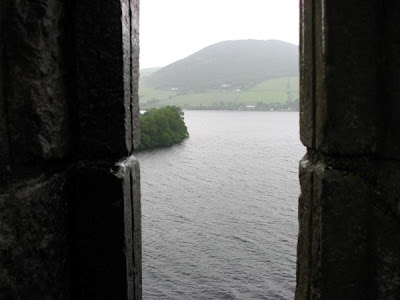 The view of Loch Ness out the windows was breathtaking. 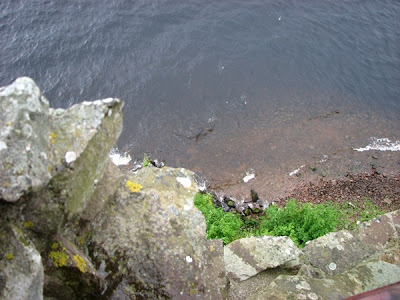 The peaty water of Loch Ness laps almost at the foot of the main tower that still stands. What is peaty water you may wonder. Water that has passed through peat and out of the bogs takes on a bit of the brown tinge from the peat. I noticed in our hotel later in Ullapool the water had a slight brown tinge. This is completely safe but does change the taste of the water a bit. Peat is also what gives some of the whiskies their distinctive brown color and smoky flavor. (But they also use peat fires to dry the malt.) By the way, we found the tap water in Scotland, even in Edinburgh to be good and caused no stomach upsets. This was fortunate considering a regular bottle of water at our hotel in Edinburgh costed 3 pounds, which is over $6 US. The exchange rate was terrible which made things cost twice as much as we're used to paying. 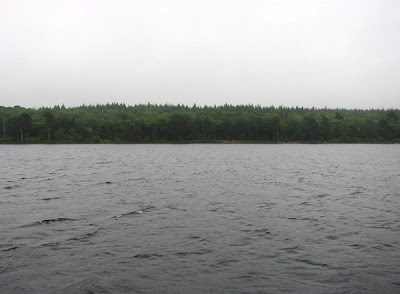 After touring Urquhart Castle, we boarded a boat for a cruise the length of Loch Ness to the Caledonian Canal. This man-made canal allows people to take boats from Moray Firth on the North Sea across the middle of Scotland to Firth of Lorn on the Atlantic. The boat was so crowded we had to stand most of the time but also enjoyed some hot chocolate and a snack on the lower deck. Everyone stayed dry inside the boat but a few of us did venture outside onto the bow a couple of times in the rain for more photos and simply to see Loch Ness more clearly. Nessie was nowhere in evidence. 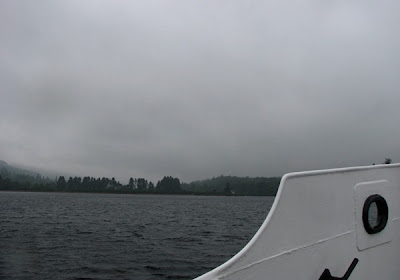 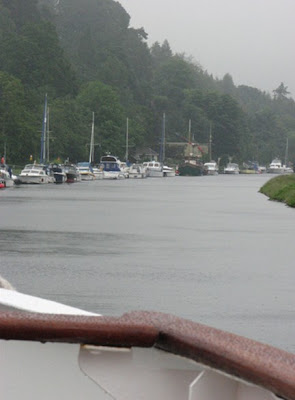 When we headed up the Caledonian Canal we saw several boats and houses. We also went through one or two canal locks, something I knew nothing about until this trip. These are locked in places that fill with water after the boat is inside. The water lifts the boat up to the next lock, or onto a higher level section of canal. 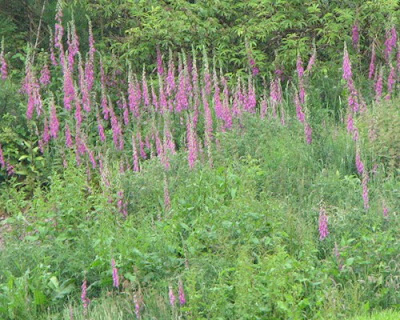 Even the weeds in Scotland are beautiful (another reason for me to be envious). Foxgloves and (non-native) rhododendrons grow everywhere. In addition, the bright yellow gorse shrubs were in full bloom. The heather was just starting in a few places.

By now it was lunchtime and we headed into Inverness for some cheap, familiar food and a few minutes of shopping. What is cheap, familiar food, you wonder? Pizza Hut in a mall, which looked very much like an American mall, including a food court and department stores, but with mostly unfamiliar names. An interesting thing to note, they serve chips (French fries) with pizza. I told you they loved potatoes.

Next up, Culloden Battlefield.