On day 4 of our trip we headed out of Edinburgh around 9 am and into the very lush green farmland of the Lowlands near Perth. We saw lots of rolling pastures with sheep and lots of fields being cultivated. 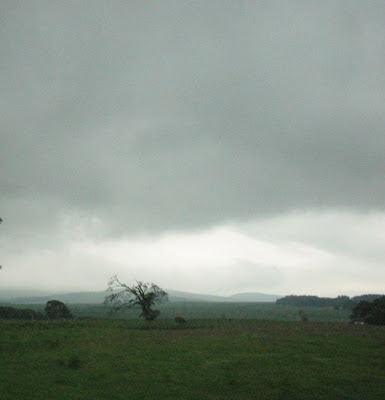 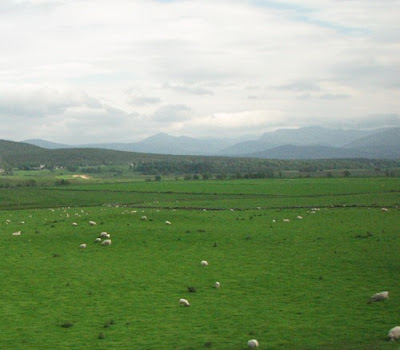 Our first visit was to the modern marvel, the Falkirk Wheel, located on Scotland's major Millennium canal restoration project on the Forth/Clyde Canal. We took a boat ride on a gondola. The Wheel lifted us up while in the boat and we cruised a short way on the Union Canal. The guide who explained how all this worked was very entertaining, again a Scot with a neat accent. But, I admit, I would've much rather toured Stirling Castle, which we passed by at 60 mph and only saw in the misty distance. At least now you know Scotland isn't filled with only old medieval castles but also bizarre space age looking gizmos. 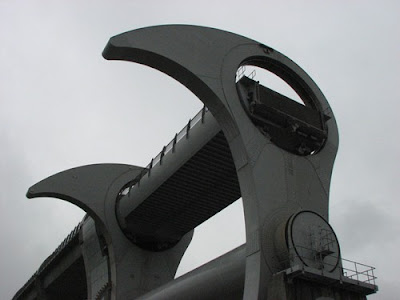 We drove by Perth on our way to Pitlochry, where we had lunch. Pitlochry is a beautiful little town with a lot of Victorian influence. In fact the restaurant where we ate was called Victoria's. I would've loved to shop here for several hours but our tour was on a tight schedule. My first bad experience of the trip happened here when we encountered the slowest banker on earth. He must have suffered from OCD, or maybe he simply hated Americans. We wanted to cash in more travelers checks because we'd been told this would be difficult to do once we arrived in the more remote Highlands. To start with, he charged us 5 pounds each, which is equal to more than $10 US. We had 15 minutes for this exchange but I was 10 minutes late to the coach. Which means we stood in line about 10 minutes, then it took him about 15 more to exchange money for 2 people. Though I had told him we were in a bit of a hurry, he had to organize his desk, put his paper clips on the papers and straighten them just perfectly and then he finally counted out the money. And this was not done quickly at all. My friend went on ahead so the driver would know I was on my way and in Bank of Scotland hell. LOL! I know the driver was not happy, but honestly it couldn't be helped. 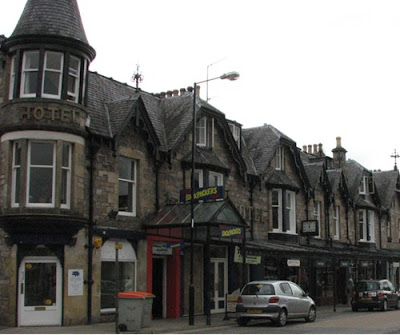 After this we entered the Grampian Mountains and Cairngorms area of the Highlands. The first mountains were beautiful and worthy of many photos. We learned that Scotland's highest mountains (over 3000 feet) are called Munros and include 284 mountains, first catalogued by Sir Hugh Munro in 1891. Our guide is an avid Munro hillwalker and has climbed most of them. We traveled on to Aviemore. It was important for me to see this area because my first novel-length historical takes place in this area. And as I had correctly guessed, the area has several trees and bushes. In fact, a times it looks much like the area of Western North Carolina in which I live, except for the mountains. Our mountains are covered with trees; their mountains are covered in heather. 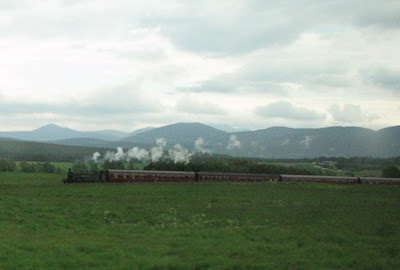 We visited the Speyside Heather Center. (Spey is pronounced like Spay, and this is a river.) Here, we had clootie dumplings and coffee or tea. Clootie dumplings reminded me a bit of the traditional fruitcake we often have at Christmas in the US. It's very heavy and dense. But it tastes much better than fruitcake. We toured the beautiful garden here and browsed an antique shop.

We continued traveling north on the A9 until we reached the coastal town of Nairn. Our hotel in Nairn, the Newton Hotel, was amazing, my favorite hotel of the whole trip. 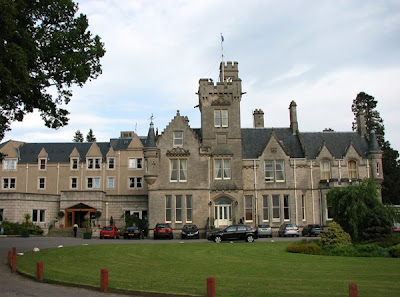 Here we saw our first close-up view of the Highland cows, also called hairy coos or heilin' coos if you want to sound like a true Scot. I don't know why but I expected them to be smaller. They are as tall as a regular cow, but much more hairy and not as round. They were adorable and we often found them snoozing. But their horns look deadly. 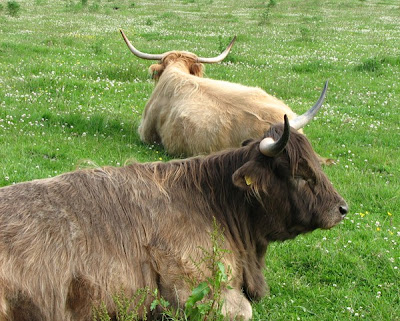 The first Scottish beach we visited was here in Nairn. It was so lovely and wonderful to visit this beach on the North Sea. This was on the Moray Firth. Though it was fairly warm here, it was still too cool to walk in the surf, but we did find one of our brave tour members doing just that. 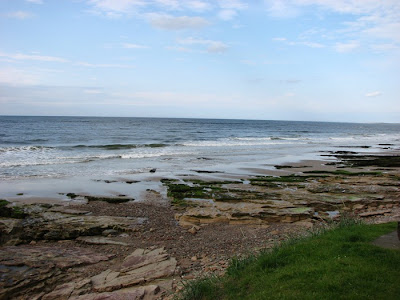 We looked for sea shells and saw the cutest Border Collie. If he noticed someone had a camera he struck a pose with a big stick in his mouth and waited for the click.

This area reminded me of Charleston, SC for some strange reason. I think it was because it was near the ocean, had beautiful old houses and lush gardens in full bloom. The hotel and the whole area had a very genteel quality which I loved.
By Vonda Sinclair at July 03, 2007
Email ThisBlogThis!Share to TwitterShare to FacebookShare to Pinterest
Vonda Sinclair
Vonda Sinclair writes Scottish historical, paranormal and contemporary romance.