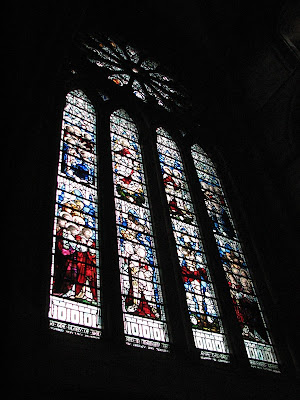 After lunch in Kirkwall on Orkney, we had a guided tour of the fascinating and beautiful St. Magnus Cathedral. It is the most northerly cathedral in the British Isles, and considered "one of the finest and best preserved medieval cathedrals in Scotland." The architecture is Norman. 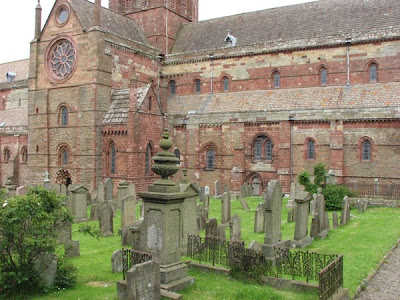 Orkney was held by Norway and/or Denmark for centuries, from sometime during the 800s until 1468. King James III of Scotland married Princess Margaret of Norway. Since her father, the king, couldn’t pay her dowry, he used Orkney and the Shetland Islands as collateral. A few years later, he still hadn’t paid, so James annexed the islands and they became part of Scotland. 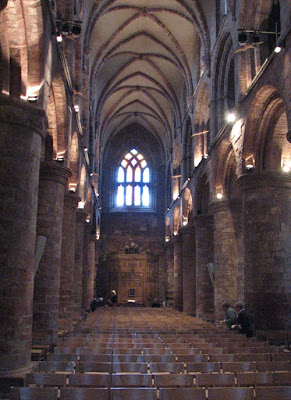 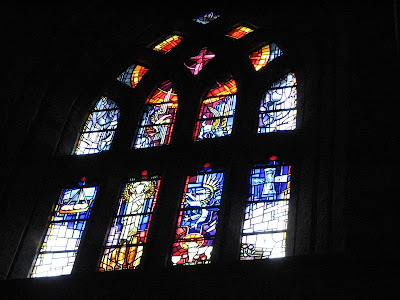 Construction on the cathedral began in 1137 and took 300 years. Earl Rognvald of Norway initiated the project in honor of his uncle, Earl Magnus who was killed around 1115 – 1117 and became a saint in 1135. His story is detailed in the Orkneyinga Saga. 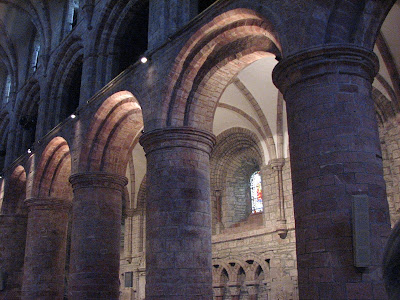 This Cathedral is unique in that it actually belongs to the City and Royal Burgh of Kirkwall. It is not, and has never been, the property of the Church. It has housed Catholics, Episcopalians and Presbyterians, complying with whatever the "official" religion of the time. 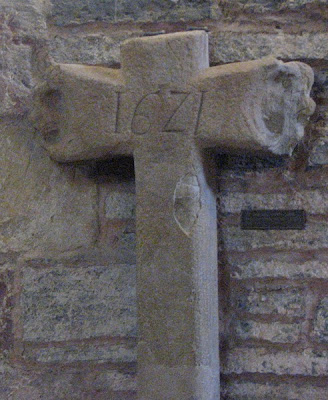 This cross with the date 1621 used to stand just outside the cathedral. At the market which was held there through the centuries, people would tie their canopy ropes to this cross and it was eventually broken. Now it is well taken care of inside. 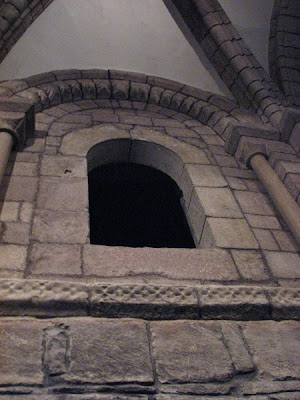 St Magnus Cathedral is the only cathedral in Britain to have its own dungeon, "Marwick's Hole." (above) Criminals and witches were imprisoned here beginning in the 1500s. After this we went out into the country and visited the beautiful Italian Chapel. It is a tiny church built from two Nissan huts during WWII by Italian prisoners of war. These men had been brought from North Africa to build the Churchill Barriers at Scrapa Flow on Orkney to keep out further invasions. (A German submarine had sunk the Royal Oak battleship there.) 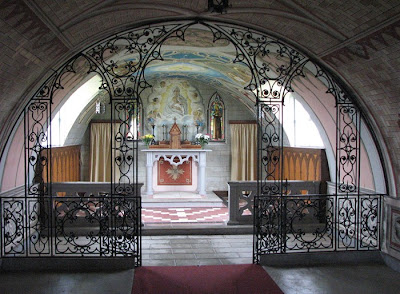 These Italian POWs were very enthusiastic in building their chapel and creatively used the Nissan huts they were given along with concrete, paint and scrap materials. You may wonder what a Nissan hut is (I know I did.) It's one of those plain metal buildings you sometimes see associated with WWII that look like a half barrell turned on it's side. See the rounded shape of the room? I find it amazing they could create something so beautiful out of these materials. 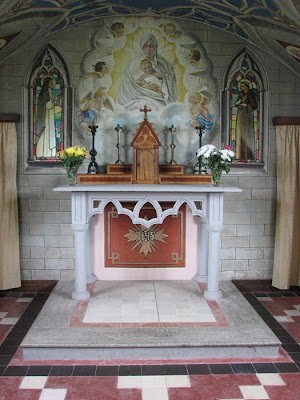 Most everything you see, tiles, plaster and intricately carved wood is actually Trompe L’oeil, a brilliant painting technique which tricks the eye. 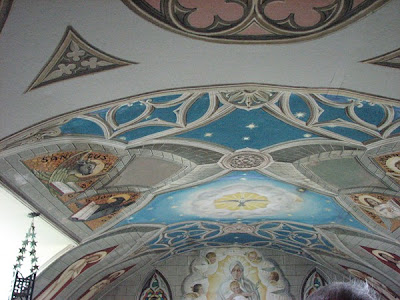 You can read the fully detailed and touching story here: http://www.bbc.co.uk/legacies/heritage/scotland/highland/article_1.shtml

The contrast in these two churches was amazing--one ancient and huge, the other more recent and tiny. But both were very beautiful in their own way. To read more about St. Magnus Cathedral click here: http://www.orkneyjar.com/history/stmagnus/magcath.htm

After this, we boarded the ferry and cruised for Scrabster and our hotel in Thurso. We had a very enjoyable conversation with one of the crewmen on the way back as we stood on deck and again observed the cliffs on Hoy and he told us about the local wildlife, especially the abundant bird population. We were hoping to see some seals or orcas but didn’t. The man, who had a wonderful Scottish accent, told us that about a week or two before, a pod of orcas had been seen there. While on board, as part of the tour, we had tea or coffee and scones. They were delicious.

For one last glimpse of Orkney, from ancient cliffs to modern technology, check out this neat video I found on YouTube
http://www.youtube.com/watch?v=mPrjJj8Ds64
By Vonda Sinclair at July 13, 2007
Email ThisBlogThis!Share to TwitterShare to FacebookShare to Pinterest
Vonda Sinclair
Vonda Sinclair writes Scottish historical, paranormal and contemporary romance.

I'm so glad you like them, Vanessa! Thanks for visiting!