After leaving Edinburgh Castle, we again walked down the thousand steps toward our hotel in Old Town. We ate lunch at the 16th century Beehive Inn, just across Grassmarket from our hotel. We chose it because of its history. Four hundred years ago the Beehive was a coaching inn. I often write about coaching inns and wanted to go into an authentic one. It is said to be haunted. Just outside the pub's doors once stood the main city gallows. 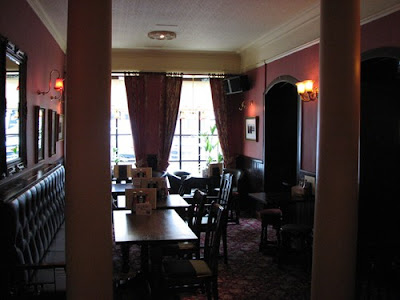 After a brief visit to our hotel, we hurried back up to a shop just outside Edinburgh Castle where we were told we could exchange some travelers checks for British pounds. Next I wanted to visit Gladstone's Land, set up like an authentic 17th century home or tenement building in the overcrowded Old Town, but we were too late and it had already closed. We walked by John Knox House. My friend and I walked for hours along the Royal Mile and went into a few shops. Then we came upon Mary King's Close, which we had always wanted to tour. Being fans of Most Haunted, we had both watched last Halloween as the crew did a live show all night in this underground area. They apparently had several paranormal experiences. Our tour guide at this site was a nice young lady, dressed up in 17th century costume and acting out the role of Mary King's daughter. 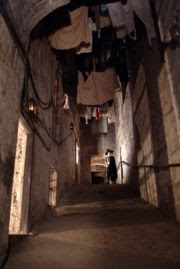 From Wikipedia: "Mary King was born in Edinburgh towards the end of the 16th century. Mary earned enough money to afford a decent lifestyle by sewing garments and selling fine cloths from a shop on the High Street called a laich forebooth, or a low stall. Mary was also a burgess in her day which meant she was had voting rights in the city which was very uncommon in those days.

In 1616 she married a local merchant burgess, Thomas Nemo or Nimmo and together they had four children children-Alexander, Euphame, Jonet and William. Thomas died in 1629 leaving Mary and her four children alone. Together they moved to, what was then known as King's or Alexander King's Close. Alexander King had been a prominent lawyer in the city and was no actual relation to Mary, despite what people say. The name of the close was later changed to her name, Mary King.

Mary King’s Close consists of a number of closes which were originally narrow streets with tenement houses on either side, stretching up to seven storeys high and located in the heart of the city of Edinburgh’s Old Town (affectionately nicknamed at the time as Auld Reekie) in Scotland.Due to over crowding the city reopened the closes some 40 years later. In 1753 the burgh council decided to erect a new building on this site, the Royal Exchange (now the City Chambers). The houses at the top of the closes were knocked down and part of the lower sections were kept and used as the foundations for the Royal Exchange. The remnants of the closes were left beneath the building."

The closes were hit particulary hard during the plague of 1645. Rats and fleas being the main problem. Many people in the closes died of plague. An authentic looking wax display of a doctor and plague victims is set up here. You can read more here.

We were not allowed to take photos in the close because it was underneath a government building. It was very dark and the ground uneven. It was easy to stumble or trip, but thankfully no one fell. The guide was wonderful. She tried to frighten us several times with ghost stories but I wasn't afraid. :-) My friend was a bit jumpy. In some of the rooms we saw the original 17th century wall decoration, painted with leaves and flowers to imitate wallpaper. The room where the little girl's ghost is said to haunt, Annie's Room, did feel colder than the rest of the rooms. The story goes that a psychic toured the underground area a few years ago. She didn't feel any paranormal activity until she entered this room. The little girl ghost tugged on her clothing then told her she had been abandoned by her family during the plague because she had the disease. They'd left to try and save the rest of the family. She told the psychic she'd lost her doll. The psychic sent someone up to street level to buy her a doll and Annie was happy with her new toy. Since then visitors have left hundreds or thousands of dolls and toys for her in a sort of shrine in one part of the room.

Click here to read more. They also leave donations of money which now goes to help sick children. After exiting, we walked by St. Giles Cathedral and back up Royal Mile and took South Bridge over to Chambers Street. South Bridge crosses over Cowgate which is the old original street where cattle were brought from grazing back into the city and toward the markets. "Gate" means "street" in Scots. 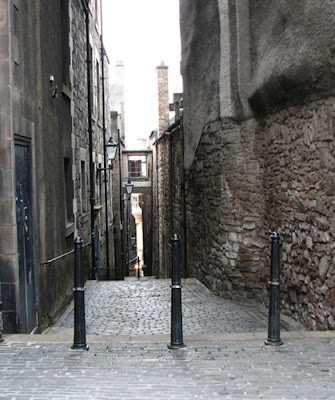 Example of another narrow steep close which is still open to the sky. 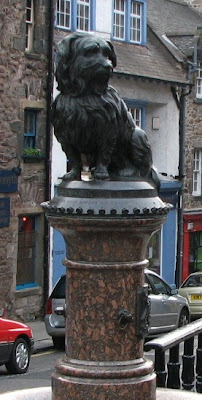 We visited the statue of Greyfriars Bobby. Please read this article to learn the very touching story. 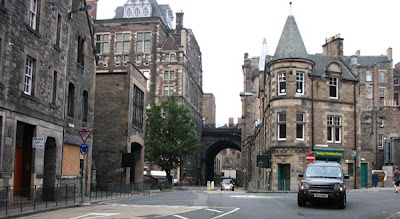 We walked down Candlemaker Row and toward our hotel on Grassmarket. But before reaching the hotel we decided to eat at a pub called Maggie Dickson's. I had a very good steak pie with a flaky crust and potatoes. (Scots serve potatoes with everything, and sometimes potatos cooked in a variety of ways all in one meal. Cooked whole, mashed, etc.)
Maggie Dickson, whom the pub was named after, was a real historical figure who was unsuccessfully hanged for either killing her illigitimate baby or concealing the fact she was pregnant. Her baby may have been born too early and died. She then tried to hide the body in the river. I've heard two versions of this story. Anyway, she was hanged but on the way to her burial in the cart, she revived. The officials decided that it must be an act of God, so she was allowed her freedom. She lived 40 more years, had several more children and ran a nearby alehouse.

Next we leave Edinburgh and head through the Lowlands and into the Highlands.
By Vonda Sinclair at July 02, 2007
Email ThisBlogThis!Share to TwitterShare to FacebookShare to Pinterest
Vonda Sinclair
Vonda Sinclair writes Scottish historical, paranormal and contemporary romance.

So here I am again, finding you're blogs here quite interesting .. and if I may I shall add a story of one of those "close" story's .. I was with the (x) wife and a bunch of friends in Edinburgh, time to kill before some performance started .. this year Del Amitri (rock band) were playing at Edinburgh Castle.

Anyway we were there with this time and what were we to do with it? Then I had this brainwave .. lets go on a ghost walk .. there is a few to choose from in and around the Castle area. On picking one .. just as the daylight was ending we set of in our group of perhaps 30 strong. We had Heather tonight as our storyteller/ghost expert. around 20 mins into our 40 min tour we walked into whats know as a "close" i.e. a dark passage between two building, this "close" brought us out into a small courtyard with high tenement building on all sides.

Heather proceded to tell her tale of how this poor man was murdered and how his ghost manifests himself when this FRIGGIN GHOST JUMPS UP right in front of us .. now I had been expecting something like this to happen but it was still a fright and a laugh at the same tiime, some of the women screamed and screamed.

What happend next was even more funny, oh and unscripted thou we were not sure at the time. We suddenly had another screaming woman coming at us, this time with a tennis racket in her hand, she walked right upto our visiting ghost, this poor man was not ready for such an attack as she laid a few good forehands into the back of his head.

After a few seconds a few of us got between this raging tennis player and stopped the assult before she brought her backhand and slice shot into bare. The police were called and statements taken .. apparently she lived in one of the buildings and was sick and tired of her kids being woken up by the screaming tourists. She had been at the end of her tether and that night the tether broke.

I believe she was fined fairly heavily for the assault, damn good tennis strokes though I have to say.

LOL! Thanks for sharing your story Merv! Hilarious! I wish I could've seen that.