On day 3 we got up early, I don't remember the time, and had breakfast. No unusual Scottish stuff, just cereal, toast, croissants, coffee, juice, etc. When we finished breakfast, we couldn't find any of the rest of our tour group. We thought they had taken the coach and left us to go to Edinburgh castle. In a panic we set off walking up (and up and up) to Edinburgh Castle. The first several flights of steps were called Granny's Green Steps. Then we walked a short distance along Johnston Terrace to another long set of steps called Castle Wynd North that lead up to Castlehill, Lawnmarket and Royal Mile. Once we arrived, completely out of breath, chilled but sweating from our exertion, the castle guards informed us with a smile that we couldn't have possibly missed our bus because the castle didn't open for another hour. Huh? Okay, so we're an hour early. LOL! We thanked them and while kicking ourselves, descended the million steps again, but instead of going back to the hotel, we strolled further along Johnston Terrace and up the long way again to Royal Mile. We passed several interesting churches, shops and attractions but nothing was open that early. We then descended Granny's Green Steps again and returned to the hotel, never telling anyone of our ditzy moment. 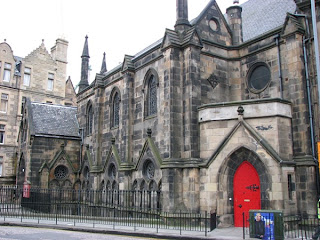 Incidentally, our driver and guide, Robert, who is from Northern Ireland would NOT have left us. He always counted before setting off from each stop. There were 29 in our group. Robert made the tour twice as enjoyable. He has a wry wit and kept us laughing most of the time. He is also a former French and Latin school teacher so he thought it very important that we learned a lot of history, etc. about Scotland. I felt this added much to the trip. 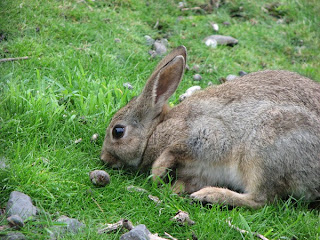 Scotland is full of bunny rabbits. We saw two on the very steep hillside lawn right below the Castle.


We had a wonderful kilted Scottish guide for our tour of the city. What a great Scottish accent he had! I enjoyed listening to him. We rode the coach along Princes Street, through the beautiful Georgian "New Town" which was designed 200 yrs ago, then back to the oldest part of the city, Old Town and Royal Mile, which has narrow streets, closes (very narrow alleys) and medieval buildings. We saw the Scott Monument and many other famous sites like the house where Robert Louis Stevenson grew up. 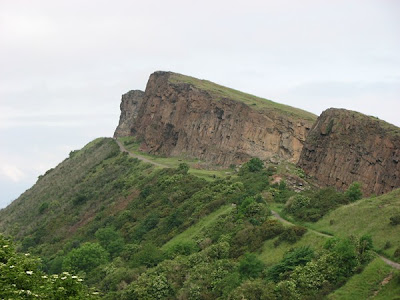 We then rode toward Arthur's Seat, and got out for photos. We then drove to Holyrood Palace, the Queen's main Scottish residence. I very badly wanted to tour it, but unfortunately we didn't have time. Instead we strolled around outside the gates and learned lots of history from our guide. A young kilted boy of about 12 was playing bagpipes there, apparently very badly according to our guide. But I thought he was charming. The Queen was expected the next week and during that time the palace is closed. 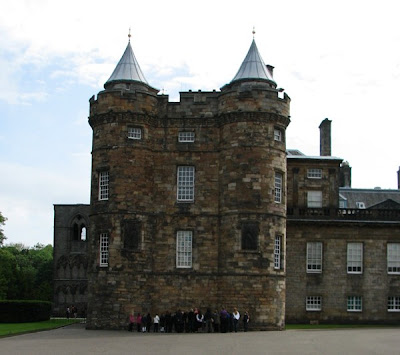 
We drove back along Royal Mile up to Edinburgh Castle (see yesterday's post for photo) again for a tour inside. It was packed with people, lots of tourists speaking lots of different languages. The workers were installing the removable stadium seats for the Military Tattoo coming up in August. If you click here you will see a map of the castle, which includes several buildings. 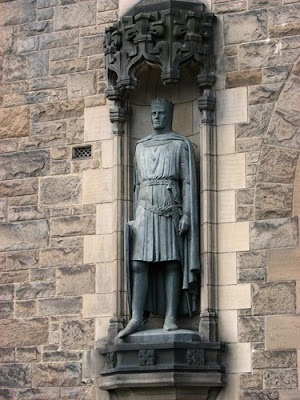 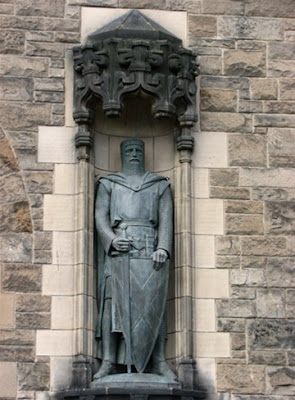 Inside the Castle--morbid people that we are--we explored the prison vaults first. Prisoners of war, even Americans during the Revolution, were kept here and it was a bit creepy and sad. My friend Dana took an unusual photo and we thought it might be a ghost. I then caught a light orb on one of my photos from this area. For those of you who don't watch Most Haunted or other ghost shows, light orbs indicate possible paranormal activity or spirits lurking about. 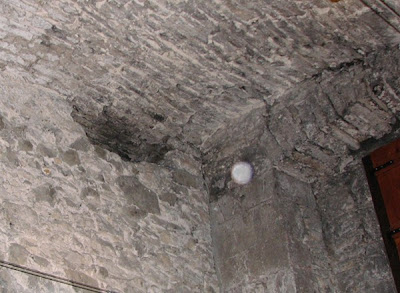 We then entered the Vaults and saw the Honours of Scotland, The Crown Jewels which include the crown, the scepter and a sword, first used together when Mary Queen of Scots was crowned at Stirling Castle in 1543. Also located here was the Stone of Destiny, the seat where Scottish kings were crowned until the English King Edward took it from Scone Abbey in 1296. The Stone was taken to Westminster Abbey and for nearly 700 years was used in the coronation of English kings, and then from 1714, British monarchs. (No photos allowed in this area so I have borrowed some.) The Stone of Destiny was finally returned to Scotland in 1996 and will leave only when there is a coronation in Westminster Abbey. 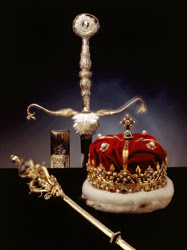 We then toured the Edinburgh Castle Palace and explored the Birth Chamber where Mary Queen of Scots gave birth to King James VI & I. This was important for me because my stories take place during the reign of this King James. 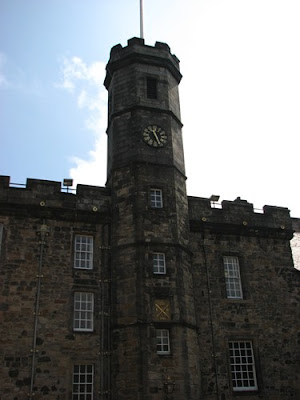 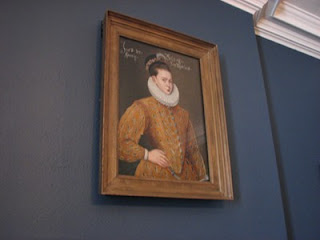 Mary Queen of Scots portrait in the Birth Chamber.


We explored the Great Hall built by King James IV and completed in 1511. It houses a great collection of weapons. 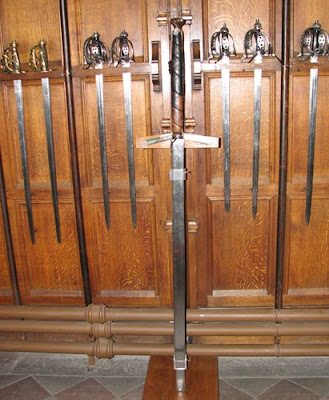 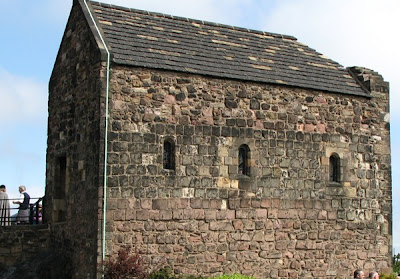 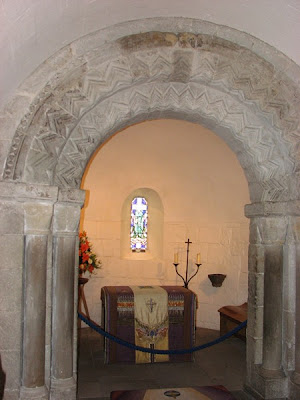 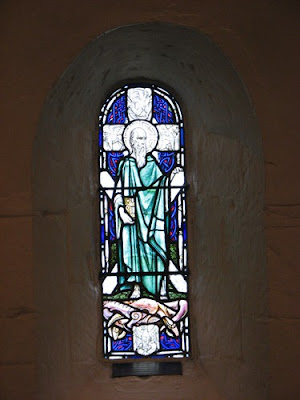 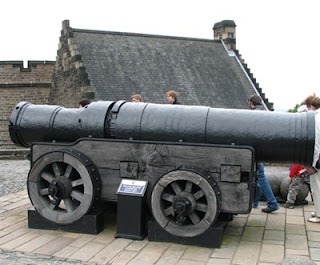 We didn't have time to go into the War Memorial but we walked along Half Moon Battery, saw Mons Meg--the huge medieval siege gun. It was made in 1449 and last fired in 1681. We saw the tiny cemetery (see below) were the favorite and mascot dogs were buried. One thing I noticed about Scots, they love their dogs! Gotta love that quality. We exited via the Lang Steps (which was the original way up to the Castle during the middle ages.) We then shopped for gifts and things. 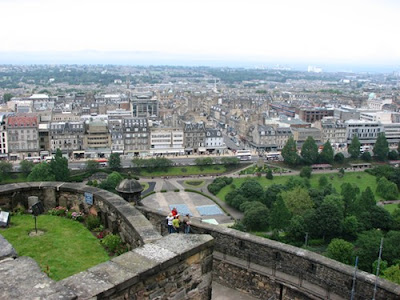 You might think we would call it a day after all that, but it's only lunch time, well 2 pm actually. We had the whole afternoon and evening free to do whatever we wanted. More on that later.
By Vonda Sinclair at July 01, 2007
Email ThisBlogThis!Share to TwitterShare to FacebookShare to Pinterest
Vonda Sinclair
Vonda Sinclair writes Scottish historical, paranormal and contemporary romance.

St. Margaret's Chapel is my favorite part of Edinburgh Castle as well. There's just something so peaceful about sitting in there and imagining how it looked when it was in use all those years ago.

Great photos! Brings back a lot of good memories and the wish to return.

Dana, so glad you checked out my blog posts and photos of Scotland! Yes, we must go back soon!! How does next week sound? LOL!