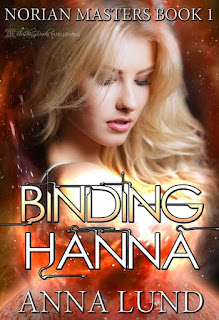 Hanna does not hesitate in her duty to protect her princess when they are captured by slave traders. Despite fighting for her freedom, she finds herself bound and chained on a spaceship headed for the sex planet Noria, fated to become sex slave to the king.

Hanna vows to find a way to make the best of her new situation, but when she falls for Jarrod, how could any other master ever be enough? And now that Jarrod is as much a captive to the feisty Hanna as she is to him, he knows he has to find a way to break her free.

Hanna had never felt anything like Jarrod’s rough hands caressing her skin. She knew she shouldn’t like what he was doing. Shouldn’t be aching for more of this incredible friction that was sending waves of sensations over her skin.  She shouldn’t be wanting more.

But as soon as she awoke and saw him standing there in the doorway, staring at her, she’d wanted him to touch her again. He wasn’t wearing a shirt and she couldn’t help but admire his sculpted muscles.

The tattoo surprised her. It was all black and covered the entire left side of his chest. It followed the curves of his chest, from his broad shoulder down past his tight nipple. Thick black lines radiated out from a center sunburst design to a circular border, with intricate designs between.

Some people on Vanya decorated their bodies in this way, but Hanna had never seen a tattoo that actually enhanced someone’s body as this one did. It made him look even stronger and sexier. If she ever got out of these cuffs and chains, she hoped she’d get a chance to touch it.

But for now he stood behind her, where she couldn’t see him. He held her tightly around the waist so she didn’t swing helplessly from her chains. Her bare back pressed into his naked chest. His hard strong body held her somewhat steady. And even though his fingers were calloused, he was gentle as he swept his other hand across her abdomen. Hanna didn’t realize how hungry she’d been to be touched. She hadn’t seen her family in years. She had her chores around the palace and her duties to the princess. But no touching was ever involved.

If you love sexy, emotional stories, set in another world with bondage and spanking involved, give Binding Hanna a try. At 99 cents, you don't have much to lose. And if you love the Norian Masters world and want to keep reading, you don't have to wait for book #2. Taming Serena is available now too! 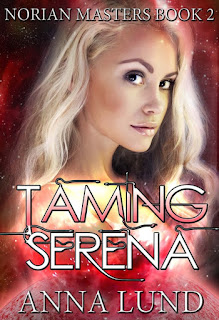