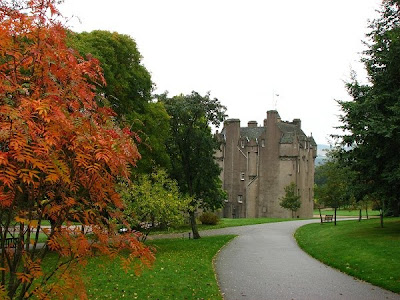 On my first driving experience in Scotland, we set the GPS to guide us to Crathes Castle in the east of Scotland. But did it take us there? No, it took us (in our rented Mercedes) along a narrow muddy road filled with cow poop to a barn. Why me?! Do the GPS gods hate me?

We drove around what seemed like circles on those one-lane Aberdeenshire roads until we found a sign for Crathes Castle. Whew! Finally! And it was well worth all the trouble. 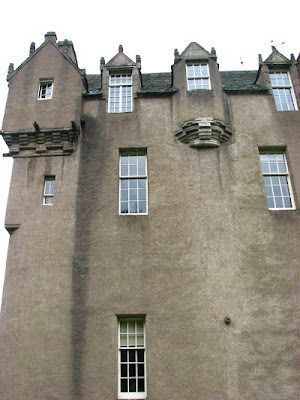 I was excited to visit Crathes because it’s a 16th century tower house, much like the ones I often set my stories in. Crathes Castle was started in 1553 and completed in 1596 by the Burnett of Leys family. Another wing was added in the 1700s. The land was given to the Burnett of Leys family by Robert the Bruce in 1323 for their loyalty and was occupied by the same family for around 370 years. Originally the Burnett family lived in a crannog on the Loch of Leys then moved to the present site of Crathes in the 1500s. They lived here until 1966. Sir James and Lady Sybil Burnett gifted the property to the National Trust of Scotland in 1951. The castle caught fire in 1966 and two wings were damaged. During the 1970s the castle was restored. Crathes is said to be one of the best preserved castles in Scotland. I did get a genuine historic feeling as if I’d stepped back in time several hundred years. 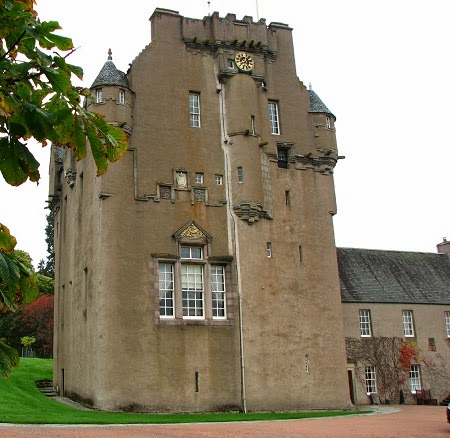 Crathes is a harled castle. Harling is an exterior surfacing technique which weatherproofs a building. Historically it was often used on Scottish castles and other buildings. It is a sort of plastering technique which covers stone to protect the stonework from the often harsh weather in Scotland. It is not cement. The process uses small pebbles or chips of stone and lime render. It is then sometimes lime washed. 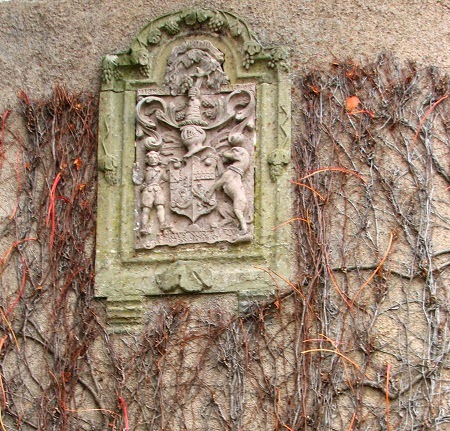 Archaeologists have determined that settlements have existed at Crathes and the surrounding area since 8000 BC. These people were farmers and fishermen, living near the River Dee. 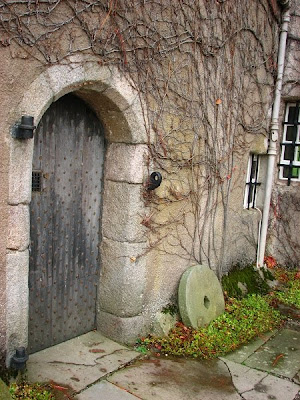 We were not allowed to take photos inside of the rooms but they were beautifully furnished in historic pieces. We saw the Horn of Leys, a jeweled ivory horn, given to Alexander Burnett by Robert the Bruce in 1323. It is on display in the great hall. Some of the original Jacobean (or Scottish Renaissance) painting remains on the ceilings and upper parts of the walls in such rooms as the Chamber of the Muses, the Chamber of Nine Worthies and the Green Lady’s Room. These are fascinating, old paintings of historical figures including their names and written passages of scriptures. This was one of my favorite parts of the castle. 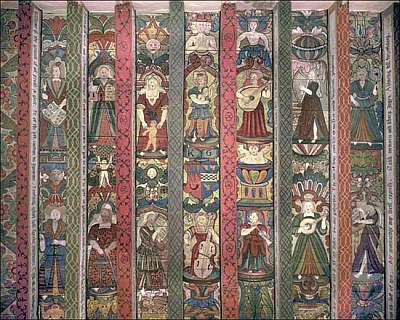 Above is a picture I found of the painted oak ceiling of the Chamber of the Muses. Apparently it was covered up for years and was rediscovered in 1877. 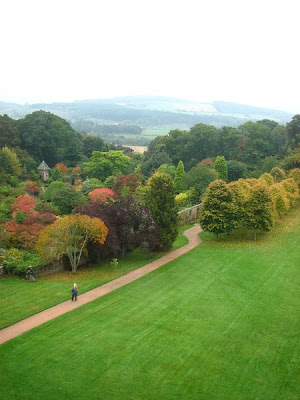 The views from the upper floor windows were stunning especially with the fall colors in the gardens and grounds. 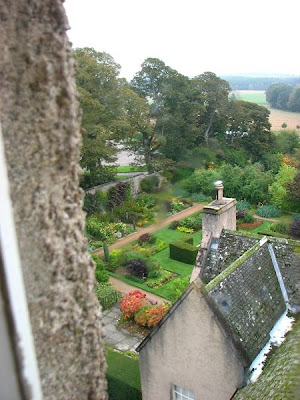 A view out the windows of the roofs below and the gardens beyond. 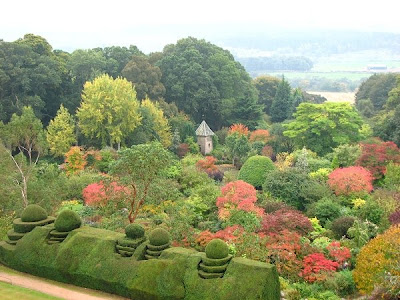 The autumn colors in the gardens were spectacular. 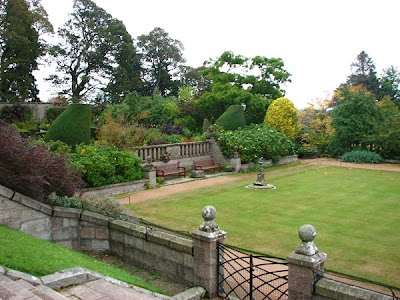 The estate contains 530 acres and apparently the barn we’d gone to at first was the back part of the estate. 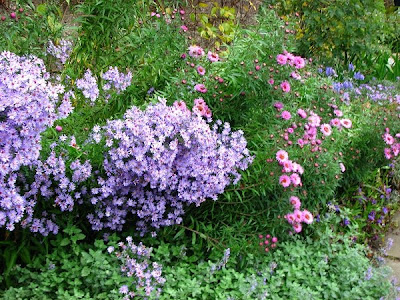 The estate also contains almost 4 acres of beautiful walled garden divided into 8 themed areas. I loved walking along the pathways among the flowers and shrubs. Being a gardener I saw many plants I recognized and would love to grow myself. The yew hedges date from around 1702. 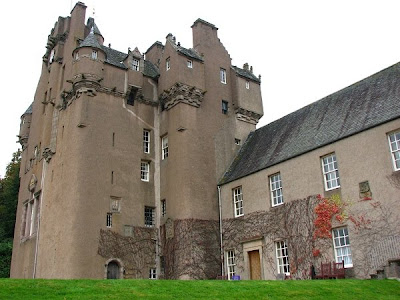 In 2013, archaeologists found what is possibly the world's oldest calendar on the grounds of Crathes Castle. Originally they excavated the Mesolithic monument in 2004. It is a luni-solar device. It predates other time-measuring devices by 5000 years. I didn't see this. You can read more about it here. 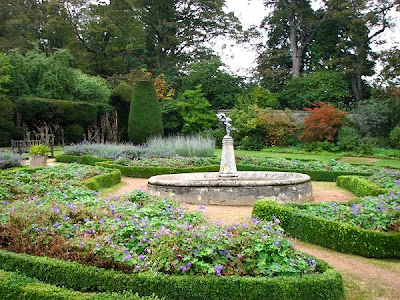 The formal gardens were truly beautiful and amazing. 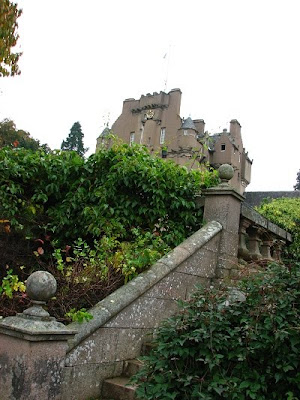 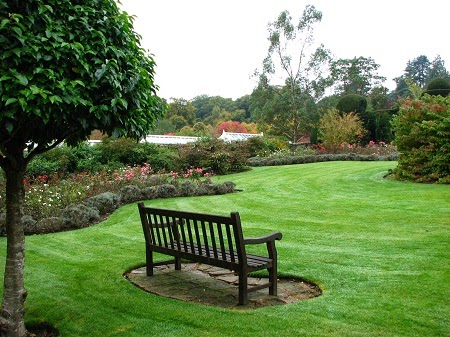 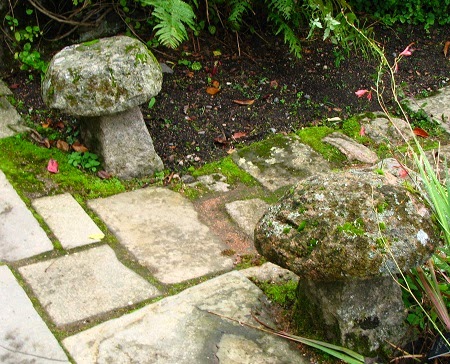 Hope you enjoyed this visit to Crathes Castle.

The more time Torrin spends with the strong and independent Jessie, the more determined he is to win her heart. Once she allows him a kiss, he feels her passion flame as hot as his own. After she knows Torrin better, Jessie finds herself falling for the fearsome Highlander. But the odds are stacked against them. The sinister MacBain is bent on kidnapping Jessie, making her his bride and killing Torrin, while Jessie's conniving younger brother, Haldane, is determined to use Jessie to take over the castle in his older brother's absence. Jessie fears she can never be with the man she loves, while Torrin will do everything in his power to ensure they are together forever. In his heart, she is the only lady for him. Amazon | Barnes & Noble | Smashwords | Diesel | Apple/iTunes |Print | Kobo

Ah, Vonda, yet another wonderful castle to add to my dilemma. Which ones will I visit on the next trip to Scotland, lol? A month won't be long enough to see them all.
Thanks for sharing.

I know, Mairi! It's so hard to decide which castles to visit. This is a great one and it's fairly close to several other castles.

I think this is my favorite so far. Love your photos, Vonda!

Having had this castle lived in so recently just redoubles my wishful dream of living in it! Your pictures are (of course) wonderful, and I love the history you always teach me. Thanks so much!

Thank you, Gerri! I'm glad you found a favorite! :)

Beppie, yes, amazingly some castles in Scotland are still homes. I would love to live in one, too, or at least stay a couple of weeks. :) Thank you! I'm so glad you liked the pics and history!

All right, Vonda, it's official. I'm going to pack myself in your suitcase the next time you go to Scotland! Ha! Seriously though, I loved the pictures and you really make me want to go there. I'll read your books in the meantime!

Your pictures are always amazing, just like your stories, and these are no different! Love it! Thank you for sharing!

Lani, yes I'll take an extra suitcase you'll fit in. LOL Thanks so much for reading my books!!!!

Wow thank you, Lana!!! I consider that a huge compliment!

Paisley, thank you!!! So glad you like the pics! I truly enjoy taking them.

Thanks for the tour. I share Mairi's sentiments. I want to visit every castle in Scotland, but haven't the time. The photos are very beautiful.

Thank you!! I want to visit them all, too, Brenda! They are addictive. :)

Lovely photos and descriptions, Vonda! I missed this castle on my research trips. I'm telling my husband I NEED to go back & see it... ;)

Thanks for sharing this.
Margaret

Thank you, Margaret!! So glad you enjoyed it. Hope you'll get to visit it on your next trip.

Lovely photos, Vonda. I want to go there... now! Right now I'm looking out at nearly a foot and a half of snow. It's been a rough winter in the Rockies.

Thanks for the glimpse of green and growing things.