The year hubby and I got married, I bought a dated ornament. I thought it was a cool way to commemorate our first year together, plus, you know, we needed ornaments :) Now, over thirty years later, our tree is full of ornaments and thirty-seven of them are dated. It's fun to pull them out every year and remember the year hubby and I were into cycling and bought an ornament of Santa on a racing bike. Or notice how many train and firemen ornaments we have (most of those are not dated, but clearly show hubby's interest in both). So today I thought I'd share pictures of a few of our ornaments with our readers.

First, here's the tree. It's artificial. It's small because we have very little space. It's old but I love it and hope I don't have to replace it for a long time. 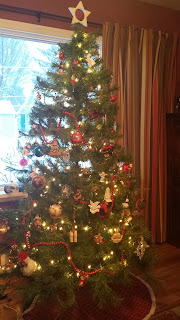 Our first dated ornament. A train, if you'll note. 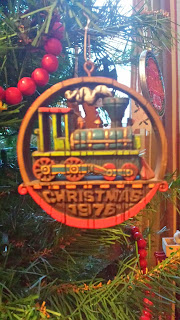 Our daughter was born 4 years later. (Apologies to our son who was born in 1983. We have no baby ornament for him, my only excuse was that he was a preemie and was still in the hospital when Christmas rolled around and I had other things on my mind...) 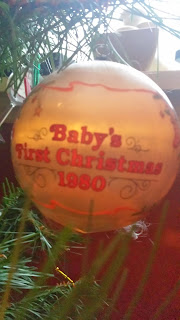 Of course, not all our ornaments are dated - or even store-bought. To show I haven't completely neglected my son, this is one of the ornaments he made which still hangs on our tree every year. 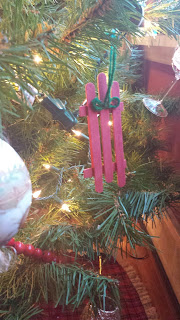 This ornament is one of my favorites. It hung on our tree when I was growing up, and when my parents sold their house and moved into an RV, I claimed this ornament for our tree. 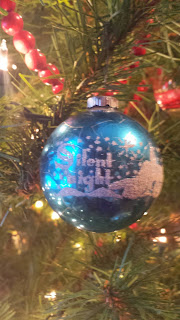 Some years have been more difficult than others to find dated ornaments. A few times I admit to buying ornaments I liked and dating them myself on the bottom with a Sharpie. But this year we had a few we liked to choose from. Yes, trains and fire trucks were on the short list, but I chose a simple, beautiful snowflake that shows up nicely amid the branches. 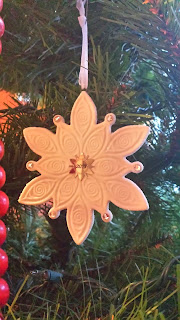 As Christmas nears, what traditions do you carry on?

We also have a bunch of ornaments that we've collected over the years. Some a little on the ratty side now, but the kids (grown-ups now) still love to see them. We have Flyfishing Santa and Surfing Santa, Rainbow trout laid out nose to tail in a star shape, some cross stitch ones I made years ago and some I made during my ceramics phase. It's fun to see them again every year, but not so much fun taking them off and packing them back up. LOL!