The first time I visited Sango Bay was on a cold June day six years ago. It was in the 40s or 50s F., cloudy and windy. A misty rain had been falling off and on all day. My friend and I were on a bus tour. The driver was taking us from Thurso to Ullapool and our lunch stop was at the Sango Sands Oasis a neat little restaurant and bar with great food. I love eating there. It sits right above Sango Bay.
That day, six years ago, after eating, we went down closer to the shore and I got my first glimpse of Sango Bay. In my eyes, it was the most beautiful place on earth. I was stunned and mesmerized. I had to get closer. I had to walk on that beach, feel the atmosphere and explore. At that time, a long set of wooden steps led down to the beach. Once down there, I took photos and videos of the waves crashing into the huge black boulders. I enjoyed the cold wind on my face. To me, it was like something out of a fairy tale. I wanted to absorb the place and take it with me, because I only had about fifteen minutes.

I didn't mind exploring the beach alone. I loved it and felt a strong connection to it. I still remember feeling like I wanted to stay there, or in the cottage above it, with that amazing view. I promised myself I would go back and stay longer next time. 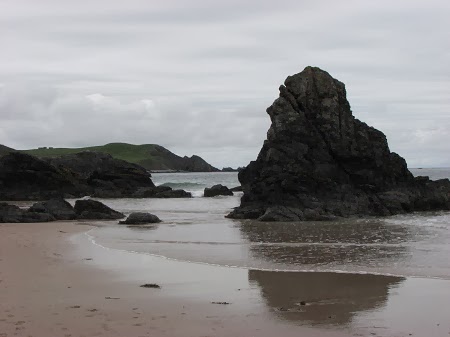 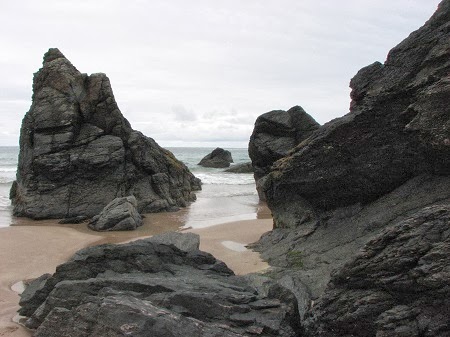 Two years ago, my husband and I went to Scotland. (His first trip.) I wanted to go to Sango Bay, even though it's a really long drive to the north coast. We didn't drive all the way from Glasgow to Durness in one day. That would be torture. We had already stayed at a couple places in between. We saw lots of red deer between Loch Ness and Durness and some amazing views. 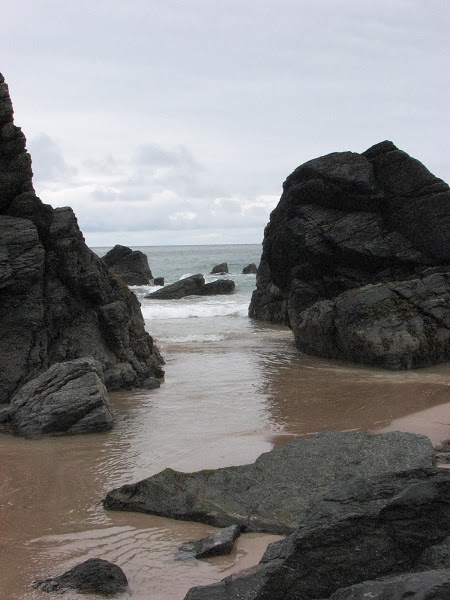 While we'd been in Argyll a couple days earlier, a huge storm hit, breaking down trees and knocking down power lines. We'd had a power outage at the B&B where we'd been staying. Once we reached Durness, the temperamental weather continued. Not as severe as the near-hurricane from days earlier, but there were very high winds, sleet, and rain. We saw a few snow covered mountains. This was in late May. 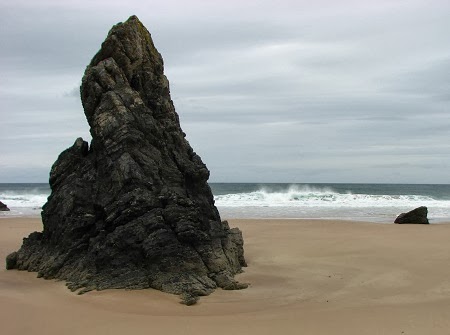 Although the weather was harsh, we went out and walked on the beach at Sango Bay one day. It felt like February and we were bundled up in multiple layers of sweaters, jackets and raincoats. My husband did not see WHY I love Durness and Sango Bay so much. LOL Well, yes, the sleet did almost beat our eyes out one day between the B&B and the car, but… shrugs… it was still an adventure. When I write about a place, I want to experience it in all kinds of weather. If I didn't experience the harsh weather, I couldn't write about it and describe it in detail. 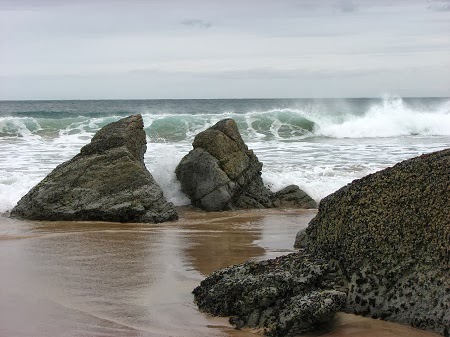 This year, we stayed in Ullapool for five days and on one of those we drove the 67 miles up to Durness for a few hours. Not only did I want to visit my favorite spot, Sango Bay, again. I also wanted to do some research for my latest book, My Notorious Highlander, which takes place there and in the surrounding area.


I set one of my favorite scenes in the book at Sango Bay during summer. I needed to know if it was ever warm enough for Scots to swim in Sango Bay and the North Sea. Sure enough, several people sat or walked on the beach and some were even playing in the water. I wouldn't have been able to. Even though it was much warmer than the previous times I'd been there, it was still only around 70 degrees F and the wind was blowing. I'm a wimp when it comes to getting into cold water. LOL But I definitely enjoyed walking on the beach on this warm, beautiful, sunny day in July.

At some point after my first visit, there must have been a severe storm that destroyed the set of wooden steps leading down the bank. Now, the only way to access the beach is a simple sand and rock pathway along the edge of the bank. Not easy to get down because it's very steep in places and there's no rail, but it's still doable.


I also notice that the amount of sand deposited on the beach of Sango Bay varies from year to year. The first time I visited, the huge pink sandstone rock at the far end of the beach was more exposed (above).

In 2011 the massive slab of pink sandstone has almost disappeared beneath the sand.

This year, the sandstone is becoming more exposed again. Of course, this changes the look of the whole beach because some of the smaller black boulders may at times be completely covered.


Thanks for visiting Sango Bay with me! 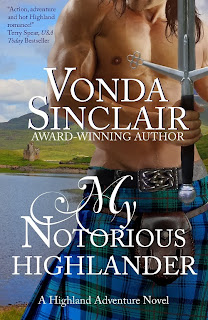 
"Allow me to talk to the lady alone." Torrin's tone was low and deep, but most disturbing of all, he never took his eyes off her.

The pictures are great. I'd love to see Scotland!

Thanks, Ella!! That's very sweet of you!

Carol, thanks! Scotland is definitely a great place to visit. Hope you get to go!

Beautiful. I love the contrast between the boulders and the sand. We don't have that at the Jersey shore.

I love that contrast too, Sandy. Scotland has some beautiful and unusual beaches.

Oh, Vonda, you have my heart smiling today. You are right it is heaven, isn't it!!! I agree those waves and the mist from the winds takes my breath away. Thank you for pulling me back into my Scottish dreams.

I'm so glad you enjoyed it, Paisley! Yes, a heavenly view!

Beautiful! Thanks for posting them, specially since 18 degree right now outside.

Thanks Debbie! I love looking at beach pics in winter. :)

Very beautiful. Would love to visit the bay on a trip to Scotland.

It's definitely worth it, Brenda! Hope you'll get to visit!

Those boulders are the remains of a monster's bones for sure. The stuff of legends. And beautiful pix, as always.

I love that interpretation, Pat! I'm glad you like them! Thanks!