Bears and Books for Christmas! 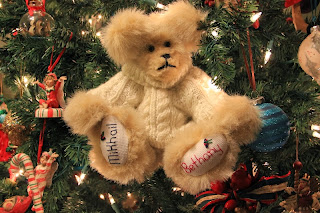 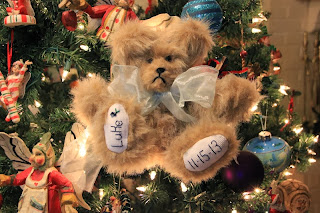 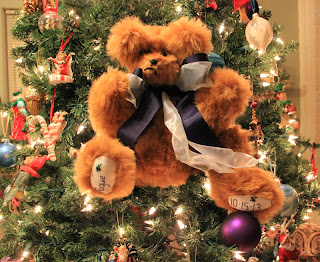 My bears are all done for Christmas! Although I've got 4 possible pending orders again.

And these are some fun reviews for A SEAL Wolf Christmas!!!
http://theroyalreviews.blogspot.com/2013/12/a-seal-wolf-christmas-by-terry-spear.html
Rating: 5 Crowns—A Royal Read*

I absolutely loved A SEAL WOLF Christmas. Definitely one of my top ten books of 2013.


Bjornolf Jorgenson has been ghosting Hunter’s SEAL wolf team to make sure the team stays safe while on missions, but he has also been doing so to keep an eye on the Anna Johnson, the sexy little gray wolf who has captured his attention.Growing close on their last mission, the two now find themselves playing the part of a married couple while trying to solve a murder investigation and raising a teen wolf who wants to run away. I adore Terry Spear’s novels and A SEAL Wolf Christmas is no exception.
Chocked full of action, adventure, mystery, chemistry, romance, heat, and witty characters A SEAL Wolf Christmas is one of those books that should come warning label stating that it has the potential to explode in your hands.
The chemistry between Anna and Bjornolf was brilliant—I could not get enough of them. They were one of those couples you want to see succeed in their relationship. What made it more interesting was the fact that Anna is covering up a secret from her past, which is also the reason she hates Christmas.
I was unable to put this book and read it in one sitting, so it’s highly addictive and thoroughly engaging.
*What is a Royal Read:
Royal Reads are our desert-island, bury-me-with-this-book, don’t-sleep-until-its-finished, all-time-favourite reads.

Royal Reviews: A SEAL Wolf Christmas by Terry Spear
theroyalreviews.blogspot.com
Navy SEAL Bjornolf Jorgenson has had tough missions before, but going undercover with feisty gray wolf Anna Johnson could top the list. She drives him crazy—in more ways than one. Now he has to
http://www.ilovevampirenovels.com/vampires/review-seal-wolf-christmas-terry-spear/
*****************************************************************
Terry Spear created an incredible world in her Heart of the Jaguar series recently, but little did I know that she had already set us up with a 12 book (so far) series all about some very awesome wolves.
It’s so hard to find an author that can write – and write well – about multiple species of shifters. Most are really good with one specifically — such as wolves, pumas, leopards etc — but lack the ability to give much insight to each ‘species’. Luckily this is not a problem for Spear. She really seems to have done her research. She knows the differences between red and grey wolves and masterfully inserts those differences into her writing. The characters exhibit qualities you would expect to find in wolves – whether in human or animal form. They react as the actual animal would most likely react (having never studied wolves, I can’t say this with certainty, but Spear is quite convincing). She builds the packs around intense characters and brings their animal traits into their human forms and vice versa. These characters are complex yet simple while still being relatable.
Once again I have found myself reading a book that wasn’t the first in the series, but Spear seems to be able to accomplish stand-alone-esque novels that still intertwine with the series as a whole. Although A Seal Wolf Christmas is the 12th in the series, the only time I felt like I should have read the other stories was when I finished and wanted to know more about certain escapades her characters referenced.
Navy SEAL Bjornolf Jorgenson had my attention from the first page. There’s just something about a man who is willing to do whatever it takes to keep the people he cares about safe that triggers some internal swoon in me. Add in several other alpha males, a strong woman who doesn’t take crap and a little mystery and intrigue and I’m not putting that story down.
Anna is one of those women you wish every author would write. She’s in no way a helpless female. I truly believe that’s why I was so drawn in by this story. Yes, many authors write strong women, but those strong women also tend to need saving – a lot. Anna is the kind of woman that is perfectly capable of saving herself.
To see these two very strong alpha personalities come together in a situation neither is comfortable with just adds to the chemistry brewing in the tale. Throw in a few curveballs along the way to make sure they don’t get too comfortable and you have one drag you in, hold you hostage story.
I’m not sure with what Spear has impressed me more – her ability to write complex animal characters, her ability to get someone like me to become engrossed in a series without starting at the beginning or just her overly compelling stories that leave you wanting more at the end.

Review: A Seal Wolf Christmas by Terry Spear
http://www.ilovevampirenovels.com
*************************************
http://goodbadandunread.com/2013/12/11/review-a-seal-wolf-christmas-by-terry-spear/
I’m always surprised at how authors can keep coming up with fresh plot ideas and characters after numerous books in a series. This is Book 12 in Terry Spear’s werewolf series, and I’m still having as much fun with them as I did when I first began reading about them.
Bjornolf Jorgenson – yeah, say that ten times really fast! – is a lone wolf, a Navy SEAL who ghosts missions to make sure teams get in and out safe. He’s had a thing for Anna Johnson for some time, and when ghosting her current mission, Bjornolf breaks his own rule and lets her team know he’s there by helping out when he thinks Anna might be in jeopardy.
Rescuing a kidnapped family in the Amazon, Anna and her team have to be hyper vigilant when they begin to suspect everything is not as it seems in the jungle. They’re glad for Bjornolf’s assistance, and that leads to another mission where Anna and he will pose at newlyweds to investigate the murder of two wolves on a Christmas tree farm and also take care of the teen who discovered the crime.
It’s Bjornolf who wants more with Anna, so he jumps at the chance to work closely with her, despite her hesitancy. He needs to know what’s in her past that forces her to shut down, to shun the holiday season, especially after he opens up to her about his most traumatic moment of his younger days. When she refuses to let him in, he decides to take matters into his own hands, knowing it might hurt more than help.
However, as they grow closer living together during their mission, Anna begins to blossom with the festive feelings of Christmas and the loving attention of Bjornolf, as well as the timid and eager trust of a young teen who needs family so much. When she’s unexpectedly torn away from them by the hands of danger, Anna isn’t about to let this villain take everything away from her. Knowing Bjornolf will do everything in his power to find her, her training kicks in, only for them all to find out that more danger is still at their door.

Terry Spear brings paranormal fans a holiday story in the latest of her werewolf series,  A Seal Wolf Christmas. Navy SEAL Bjornolf is undercover as a newlywed with agent and wolf Anna, who drives him crazy. It doesn’t make anything easier that they have to pose as the aunt and uncle to an unruly teenage wolf. They travel from the Amazon to a Christmas tree farm in Oregon for answers in this funny and romantic adventure.Ho ho ho!! Nothing is better than a romance – except a romance set at Christmas Time! Join Amy Alessio as she tells us about her favorite holiday romances. http://romanceuniversity.org/2013/12/14/reader-roundup-holiday-romances-with-amy-alessio/
And now it’s time to get back to the work at hand–Jaguar Pride!