I went straight from editing to promo'ing like mad. :) I've got some killer deals/contest going on right now and I want to get the word out.

First off, The Awakening: Britton released on Monday. YAY!!!!! This is the final for now installment of the The Awakenings series. The Entangled Covet imprint is running a huge Black Friday special for this week ONLY. All the Covet books that released on Monday are only .99. For me, that wasn't all. Since Britton is the third book of the series, Entangled decided to offer Aidan (the first book of the series) for .99 also. Super cool, right? This means that you can actually get the entire series for under $5. I don't know about ya'll, but my budget always needs a great deal and this is a killer one. So if your looking for a way to stock up on your digital library, the books are available at that price at ALL retailers. 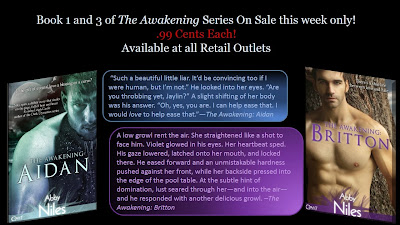 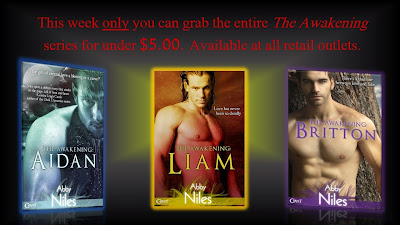 Here is the blurb for The Awakening: Britton:

"I would lick that man up one side and down the other."

Half-shifter and lead SPAC agent, Val Calhoun, has listened to women gush over the Don Juan of the precinct for the last four years. Yeah, Detective Britton Townsend is hot and has stunning blue eyes, but that foul mouth he saves only for her? What a waste of good looks. And no way does Val want that mouth anywhere near hers.

When the shifter community is threatened, Val is assigned to the case…and fails. So the High Council turns to the rogue shifter they'd sentenced to twenty years as a human--that same obnoxiously sexy Detective Townsend. And sends the two arch-enemies deep into the North Carolina Mountains-—together, and alone.

Being stuck in a tiny honeymoon cabin with Miss Castration and only one bed is definitely not Britton's idea of a good time. But the High Council doesn’t take no for an answer. After his shifter abilities are restored, Brit is once again susceptible to the dreaded, irreversible bonding instinct, the Drall. Thankfully, all he’s ever felt for Val is intense loathing, no reason to worry. Right? All he has to do is solve this case pronto, and he can go back to his footloose Casanova ways. That is, if they don’t kill each other first. Or worse...fall in love.

Reviewers are saying this one the best in the series, and I'll even have to admit that Britton ended up being extremely special to me. I always thought it would be Liam, but Britton came and smacked me upside the head hard and burrowed deep into my heart.


AND I do believe I said something about a GIVEAWAY. I'm running a HUGE one on my website right now for a pre-release celebration for FIGHTING LOVE. It will run through the entire month of December and I'm offering up a $100 giftcard. Winner's choice between Amazon or Barnes and Noble. To enter go HERE. The contest is open internationally. So go...have fun :) Here is the cover and blurb for FIGHTING LOVE. 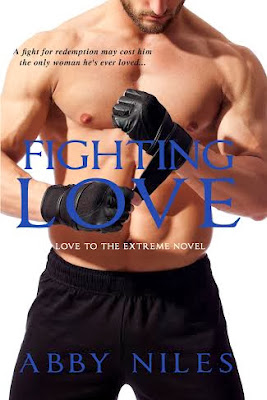 Former Middleweight champion and confirmed bachelor Tommy “Lightning” Sparks has lost it all: his belt, his career, and now his home. After the devastating fire, he moves in with his drama-free best friend, Julie. One encounter changes everything and Julie is no longer the girl he’s spent his life protecting but a desirable woman he wants to take to his bed. Knowing his reputation, he’s determined to protect Julie more than ever—from himself.

Veterinarian Julie Rogers has been in love with Tommy since she was ten, but would love to get over the man. She’s quiet nights at home and a glass of wine. He’s clubbing all night and shots of tequila. As friends they work great. As a couple? No way in hell. She just can’t get her heart to agree. When she starts spending time with another fighter, the man who’s always treated her like a sister is suddenly not being very brotherly and enflames her body like never before.

Can two childhood friends make a relationship work, or will they lose everything because they stopped FIGHTING LOVE.

By Abby Niles at November 27, 2013
Email ThisBlogThis!Share to TwitterShare to FacebookShare to Pinterest
Abby Niles
I'm a stay at home mom to 3-year old twins.

Wow..
Great giveaway / contest.
I hope I can have similar giveaway like this too.
Hope everyone enjoy it. Good luck.