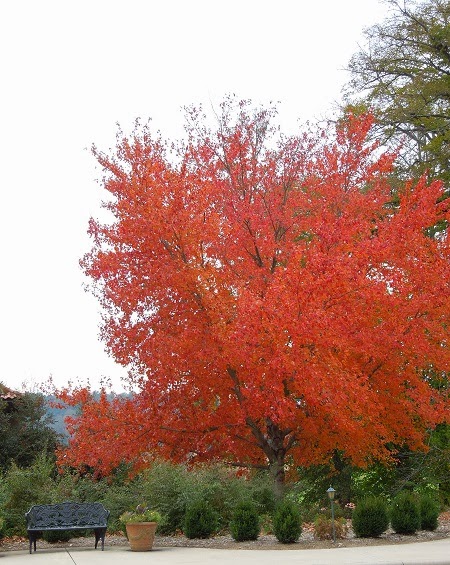 My friend and I visited Biltmore Estate a few days ago. It was time for some fun and relaxation after finishing my latest book. :) And we wanted to see some beautiful fall leaf colors. The leaves here in NC were not extremely colorful this year, but we did see a few bright, gorgeous trees. The one above is next to the ticket office. I forgot my Twelve-month pass at home and was certain they'd tell me I couldn't get in. But that wasn't the case at all. They told me to visit the ticket office and I'd be issued a new pass. Yay! No problem. 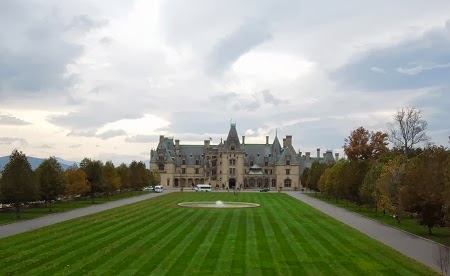 As you can see, it was a very cloudy day. There was only a tiny sprinkle of rain as we were arriving. Otherwise it was just cloudy and comfortable, in the 60s. Just right for walking outside. We enjoy taking the upper path through the woods from the parking area to this elevated and spectacular view of the house. 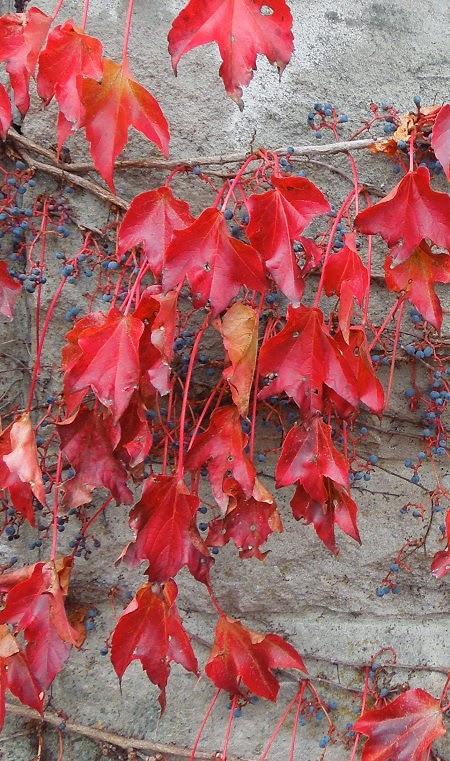 Ivy and Berries on the wall

In addition to showing you some fall color, I thought I would show you some details of Biltmore House 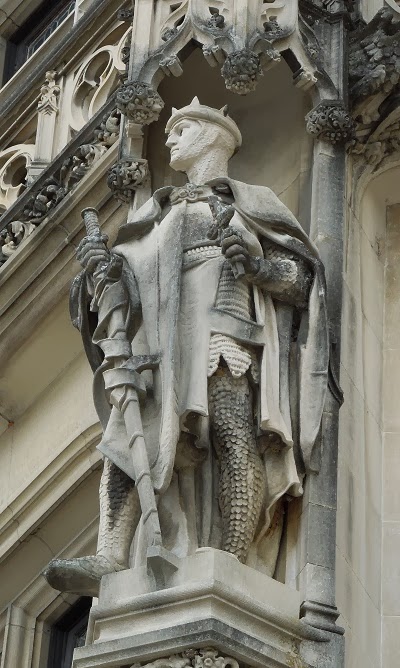 This knight looks as if he belongs in England or Scotland or maybe France. :) 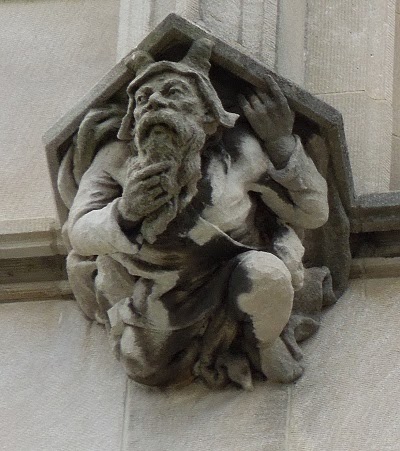 There are lots of these interesting characters all over the exterior of the house. Looks very European. 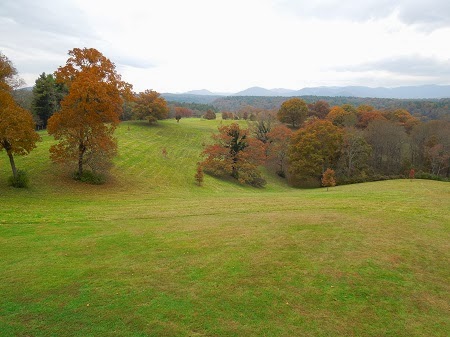 This beautiful rolling meadow, seen from the South Terrace, looks like a wonderful place to take a walk. 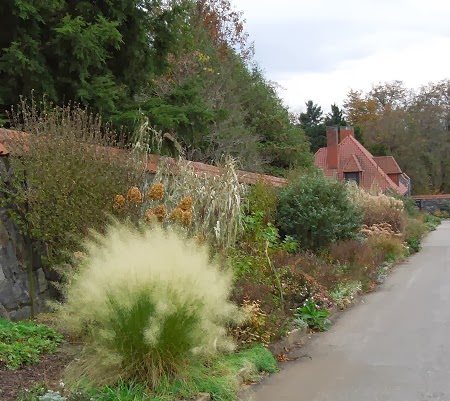 I loved this beautiful clump of ornamental grass in the Walled Garden.

We walked from the South Terrace at the house, down through the Shrub Garden, the Walled Garden, and the Azalea Garden to the Bass Pond.

It was a very relaxing, peaceful and enjoyable day to spend with a friend and see the beautiful views.
Thanks for checking out my pics!!
Vonda
www.vondasinclair.com 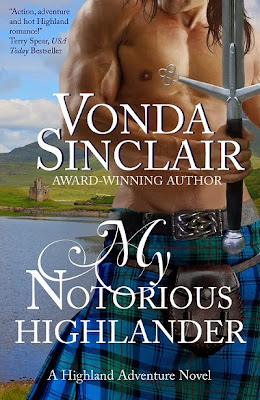 Chief Torrin MacLeod vows to possess and wed the spirited lady who stole his heart the previous winter. But Lady Jessie MacKay wants naught to do with the dangerous warrior, no matter how devilishly handsome and charming he is. When Torrin arrives unexpectedly at Jessie's home, along with Gregor MacBain, a man Jessie was formerly handfasted to, she is thrown off-kilter. She never wanted to see either man again, but now they are vying for her hand. Torrin promises to protect her from the devious MacBain, but how can she trust Torrin when she has witnessed how lethal he is? The more time Torrin spends with the strong and independent Jessie, the more determined he is to win her heart. Once she allows him a kiss, he feels her passion flame as hot as his own. After she knows Torrin better, Jessie finds herself falling for the fearsome Highlander. But the odds are stacked against them. The sinister MacBain is bent on kidnapping Jessie, making her his bride and killing Torrin, while Jessie's conniving younger brother, Haldane, is determined to use Jessie to take over the castle in his older brother's absence. Jessie fears she can never be with the man she loves, while Torrin will do everything in his power to ensure they are together forever. In his heart, she is the only lady for him.


He frowned down at the ground far below and the woman dashing away from the castle. Was that Jessie? Her head was covered, hiding her hair, and she faced away from him. But the woman was tall and slim, and she moved exactly like Jessie. She must have slipped past the guards and out the postern gate, and was now headed away from castle, in the opposite direction from the bay. Where was she going? She normally walked on the beach, but she was not headed that way now. Nor was she walking at a leisurely pace. Nay, she was practically running. When she glanced back over her shoulder once, a lock of her copper hair gleamed in the sunlight, and he got a glimpse of half her face. Aha, 'twas indeed Jessie. Why was she slipping away?
Trying to escape him? Or had something happened?
Torrin rushed down several sets of winding steps until he reached the bailey. Not having a key to the postern gate, he asked the guards to open the main portcullis for him. They also gave him his basket-hilt broadsword, for he might need it to protect Jessie.
Once outside the walls, Torrin ran toward the east. She had already disappeared from sight, difficult in this flat landscape near the shore, but gorse bushes grew here and there in small groves. Once he passed a group of them, he saw her plaid-covered head disappear behind another cluster of bushes. He was determined to catch up to her without her seeing him. She wasn't traveling toward the village, and he needed to find out what she was up to.
They must have walked for more than a mile when he lost sight of her. Muttering curses, he glanced this way and that, then ran forward. The rocky shore and a drop off lay ahead. Had she gone in that direction? Saints! Had she fallen off the cliff?
His heart rate soaring toward the sky, he quickened his pace.
Once at the edge, he saw it wasn't a cliff, but simply a steep bank of sand about thirty feet high. Beyond it was a small golden sand beach with black boulders protruding here and there from the sand. He lay down and belly-crawled to the edge so she wouldn't notice him. Aye, indeed, she was descending a rock and sand path along the edge of the bank. What in blazes was she doing here?
He scooted sideways and hid himself better behind a clump of thistles. He was wicked for spying on her, but he had to protect her. Not that he truly expected anyone to be all the way out here, a mile or more from the village and further than that from the castle.

She strolled along the wee beautiful beach, which was enclosed and cut off from other areas of the coast. Cliffs jutted out on each side, making it very secluded. He could understand why she loved this place. 'Twas one of the loveliest spots he had yet seen. To add to its appeal, a slight breeze blew in off the sea, but 'twas a warm summer day.
Jessie perched on one of the boulders and gazed out to sea. Was she daydreaming? He hoped she was thinking of him.
Moments later, she got to her feet and walked further along the shore, her gaze searching the tops of the cliffs and sand bank. He ducked. Had she seen him or sensed his presence? He kept his head down and hoped she didn't notice his plaid.
She hastened to the far end of the strip of sand, which was more concealed behind the large rocks. Though she disappeared from sight, he hesitated to crawl closer to the edge for fear she might spot him.
She appeared again, wearing only her white smock. Hiking it to her knees, she ran into the water.
"Saints," he hissed. She was going swimming? He chuckled, but forced himself to be quiet. Not that she could hear him over the waves crashing into the boulders below. What an adventurous spirit she had. It only made him fall harder for her.
How lovely she looked, her fiery red hair streaming down her back as she waded deeper into the water reflecting the blue sky. She disappeared behind a black boulder.
A swim would be perfect right now. While she was hidden from view, he took the opportunity to slip down the bank along the narrow trail she had used earlier. He hastily removed all his clothing and left it on the dry sand behind a rock, then crept between the boulders. The sun-warmed, wet sand felt good against his bare feet. Then the edges of the cold surf washed over his toes. He often took swims in Loch Assynt, so he was accustomed to cold water. It appeared Jessie was, too.
He waded into the water and peered around the last boulder. When her back was turned, he slid beneath the water and swam underneath a wave. When he emerged twenty feet out, she happened to be facing him. Her eyes wide, she screamed and swam toward the shore.
"Jessie! 'Tis only me," he called.

My Notorious Highlander is available at Amazon, B&N, Smashwords, and coming soon to other booksellers.

Beautiful pictures, Vonda! It looks like the perfect time of year to go there. I'd love to be there for the fall colors. Congratulations on your new release. It's a fantastic book!

Thank you so much, Vanessa!! It was a nice day to visit. I'm so glad you like my book too! Thanks!

Beautiful! I really need to get there. I'm not that far away.

Thanks, Carole! Yes, you would love it! They have incredible Christmas decorations during Nov. and Dec.

Your post and the beautiful photos made my day, thanks, Vonda! Imagine, some people actually lived like this... I enjoyed the excerpt from your book, too. Will add it to my e-TBR pile. Thanks for sharing!

I'm so glad you enjoyed the photos and the excerpt, Gemma! Thanks so much!!

So beautiful, Vonda. Thank you.

You take the most amazing photos. I especially loved the picture of the thisles with the misty mountains in the background. I've only recently found you and look forward to spending many happy hours in Scotland via the written word. Thank you!!

Chuck and Jennifer, thanks so much! I'm glad you enjoy the photos! I definitely have fun taking them. Hope you enjoy my books, too! :)