A Tale of Murder

In August, I traveled with my family to Charleston, South Carolina, a favorite place of mine. We, of course, couldn’t pass on the many ghost tours offered there and chose one that included walking through parts of the old town after dark. We heard many interesting and frightening tales, but one in particular stayed with me. And once I returned home, I did a bit of research to satisfy my morbid (pun intended) curiosity.
Recognized as the first female serial killer in the U. S., Lavinia Fisher was born in 1793.  Her birthplace, maiden name, or her childhood remains a mystery. She married John Fisher, and in the 1800's they opened a hotel aptly named the Six Mile Wayfarer House, as it was six miles outside of Charleston. Men visiting the area began to disappear. Report after report was filed with the authorities regarding these missing men, and it was determined that all of them were last seen at The Six Mile Wayfarer House. An investigation was begun, but there was no evidence found showing the Fishers were involved. And with their popularity with the community, the investigation was dropped
Lavinia was a charming dark-haired beauty, which added to her popularity and her hotel business. It was later learned that she had used those same attributes to help her husband rob and kill many male travelers. As more and more travelers went missing, people began to gossip, and in February, 1819, as group of vigilantes arrived at the Fishers to stop whatever was happening. The Fishers somehow convinced them of their innocence and the mob returned to Charleston. But they left one man, David Ross, behind to keep an eye on the place. The next day, in the early morning hours, he was attacked and brought before a group of men and Lavinia Fisher, whom he asked for help. But instead of helping Ross, she choked him, and then shoved his head through a window. He was able to somehow escape and went to the authorities.
It was near that same time that John Peeples was traveling to Charleston from Georgia. Exhausted, he stopped at The Six Mile House for a room. The beautiful Lavinia warmly greeted him, but told him there was no room available, but invited him in for tea and a meal. Enjoying her company, he ignored the strange way her husband glanced at him and kept talking with Lavinia, answering whatever question she asked. She left the table and returned with tea and let him know that a room had become available. Lavinia poured him a cup of tea. John didn't like tea, but didn't wish to offend his lovely host. When she wasn’t looking, he poured it out. Later he was showed to his room. After thinking about it, he wondered why she had asked so many questions. And why her husband had kept looking at him. He became wary of robbery, after realizing all the information about himself he had provided them. Thinking it safer, he slept in the chair by the door, instead of the bed. A loud noise woke him. Looking about the room, he noticed, to his horror, the bed he should have been sleeping in had fallen into a hole in the floor. Terrified, John jumped out the window, got on his horse and fled to the authorities in Charleston.
The hotel was painstakingly searched and the grounds dug up. It was filled with hidden passages containing, items that could be traced to dozens of travelers, a tea laced with an herb that would put someone to sleep for hours, a mechanism that could be triggered to open the floorboards beneath the bed, and in the basement, as many as a hundred sets of remains.
John and Lavinia Fisher, along with two men they'd been working with, were arrested. The Fishers pleaded not guilty, but were kept in jail until their trial. The two men with them were released on bail.
At their trial in May, the Fishers were found guilty of many murders and robberies and were sentenced to hang. They were housed in the same cell, and fashioned a rope from the jail linens. After John got out, the rope broke, leaving his wife inside. Refusing to leave her, he turned himself in. After that, they were more closely guarded.
In February, 1820, they appealed their conviction, but it was rejected and their hanging was set for later that month. Reverend Richard Furman visited the couple to offer his service. It is said that John begged the priest to save his soul if not his life. But the heartless Lavinia would have nothing to do with him.
On February 18, 1820, the Fishers were taken from the Charleston Jail to the gallows behind the building. John prayed quietly with the minister whom he'd given a letter to be read, stating his innocence and asking mercy for those in the judicial process who had wronged him. The letter having been read, he pleaded his case before a crowd of nearly 2,000. Before he was hanged, he asked them to forgive him.
Twenty-seven year-old Lavinia, on the other hand, did not go quietly. Wearing her wedding dress, she refused to walk to the gallows. Ranting and raving, she had to be picked up and carried there, where she continued to scream at the crowd, especially the socialites, blaming them specifically for her conviction. She yelled into the crowd, "If you have a message you want to send to hell, give it to me—I'll carry it." Before the executioners could finish the job, she jumped from the scaffold herself and dangled down into the crowd. People who attended the hanging said they had never seen such a wicked stare or chilling sneer as was on Lavinia's face.


It is said her ghost still roams Charleston. Soon after her death, her face was seen floating in front of the window of the jail where she was held. Several people recently visiting the old jail claim to have seen Lavinia wearing her wedding dress. People have been choked and scratched. A tour guide felt a rope being wrapped around her ankle. A man had his sunglasses knocked from his face. Locked doors are found open, and strange, unexplained sounds are heard often. Is it Lavinia bent on tormenting those she thinks did her wrong? 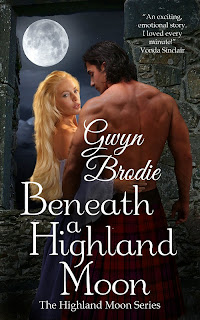 After her clan's castle falls under siege, the fair-haired Lady Jillian MacRae finds a way to escape with her four-year-old brother, seeking help from the handsome Kade MacLachlan, laird and master of Ravenskull Castle. Four years past their love had been strong—until her father betrothed her to another man who was later killed. Now, it is Kade she turns to for help in regaining control of her own castle from the wicked man who has taken over and intends to marry her.  Once she is again face-to-face with Kade, she realizes the love she thought she'd put aside is alive and thriving.


Kade is speechless when the beautiful Jillian offers herself to him in exchange for protecting her young brother and banishing the intruders from her castle—an offer he is more than willing to accept. He has no intention of allowing her to slip through his fingers again. And when her life hangs in the balance, he will not let anything—or anyone—stop him from saving her, even as his own life dangles by a thread.

Excerpt:
Kade poured himself a second dram of whisky and drained the goblet. He couldn't get Jilly off his mind. She'd walked into Ravenskull two days ago and taken him over, both mind and body. Not only that—she'd taken over his dreams. When she'd shoved the cloak from her head, she’d taken his breath away. Her beauty had hit him like a kick to the gut. She'd always been a pretty lass, but she had blossomed into a young woman of tremendous beauty. Her eyes were the same color as a still loch reflecting the blue sky above. How he ached to run his fingers through her long, blond hair, and bury his face in it. It would smell as sweet as a Highland rose—Kade was certain of it. He'd noticed the intoxicating scent the moment he'd sat down on the settle beside her. And those full lips of hers. They were perfectly made for kissing, and he wanted to be the one to kiss them. Kade stood up from the chair. 'Twas late, but no matter. He had to see her.
Jillian had just crawled into bed, when someone softly knocked. Perhaps 'twas her mother come to tell her good-night. She opened the door. Kade.
He stood in the doorway, the scent of whisky on his breath. "Might I come in?" he asked, his voice low.
She hesitated. No man, other than her father, had ever stepped foot inside her bedchamber.
"I ken 'tis late, Jilly, but I must see you. I promise it won't take long."
The look in his eyes begged her to allow him entrance. She couldn't refuse. Jillian stepped aside.
He hurried into the room, locking the door behind him.
"If my father finds you in here, there's no telling what he might do."
"Aye." He nodded, but I had to see you."
Jillian shivered.
He moved closer to her, his gaze settling on her lips. "Jilly, you make me daft. I'm as a thirsty man in need of a drink, and I'm afraid the only thing that will quench my thirst is a taste of you."
Her knees trembled and her heart raced.
He leaned down and gently brushed his lips over hers.
She closed her eyes, savoring the amazing sensation. Then he covered her mouth with his, devouring her. He tasted of whisky and smelled of sandalwood.
Slipping his arms tightly around her, he pulled her closer, softly moaning.
Her whole body feverish, she clung to Kade's shirt as she returned his kisses. His muscles felt hard beneath her fists and she yearned to touch him. Jillian let go of his shirt and ran her hands over his chest, his shoulders, his back. What was wrong with her? She could barely breathe.

By Gwyn Brodie at November 29, 2013
Email ThisBlogThis!Share to TwitterShare to FacebookShare to Pinterest