Cover reveal for My Tye 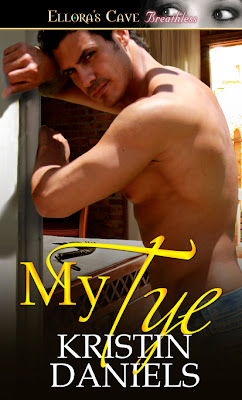 As I mentioned in the post I wrote when I returned to Fierce Romance last month, I have a new upcoming release! My Tye is a story I started writing way back in early 2011. I wrote it along with another book, flipping back and forth between the two for most of that year. I was about halfway done writing it when I received my breast cancer diagnosis. Needless to say, at that point my life kinda came to a screeching halt. The book--the books--were put on the back burner as I concentrated on my health and treatment.

As the months moved on, though, the itch to write returned. The desire would come sporadically, hitting me during the "good" weeks of chemo, again when chemo was over, and then more forcefully after I recovered from surgery.

Come September, My Tye was a "go" once again! And as soon as writing "the end" was within my grasp, the words just started pouring out of me. I smiled ear to ear when I hit the send button and turned that book in to my editor. It was a relief, a huge accomplishment and a moment I won't soon forget. My Tye is quite frankly the book that bisects my life, and for that reason--among others--it will always be very special to me.

And the cover! Whoa, Syneca knocked it out of the park. Tye is portrayed on the cover by model David Nieves. I couldn't be more thrilled that My Tye is his first cover. I know for certain that it won't be his last. Thanks, David!

I don't have a release date for My Tye yet, but as soon as I have one I'll post it. In the meantime, here's the tentative blurb and a quick excerpt. Enjoy!

Tye’s hidden his desires from Laine for over a year, but not anymore. She’s hurt and scared, which throws the Dom inside him into a rage. He’ll do anything to protect her, even move her to his ranch. But having her all to himself sends his control into a tailspin. And when Laine finally reveals her sexy secrets? All bets are off. Deep down, he knows he’s the only man who can give her everything she needs.

But there’s an enemy on the loose, one whose personal brand of hatred has been unleashed before. Laine’s life is on the line. In the span of a heartbeat, Tye’s is too. To save them both, he’ll have to surrender control to the one woman who might not be ready to accept it.


As he looked at her, his insides burst in a powder-keg of protectiveness and need. Of all those times he’d held back with her… Shit, he’d been kidding himself to think it was just because of his position in town, or even because of hers. Tye could’ve—hell, probably even should’ve—been up front from the beginning. With the gentlest of touches, with the simplest smile and an honest word of sincerity, she could’ve been his by now. But he hadn’t said anything—and Christ, he regretted it now. Finally touching her, finally soaking in the warmth of her skin, he knew. He knew he’d wasted so much time.

He cautiously held her face in his palms and stroked her skin. Her battered cheek, her quivering chin. Her full bottom lip, moist and soft against his thumb. He wanted to kiss her. Ah God, he was going to kiss her.

Leaning forward, he brushed her lips with his. Careful not to hurt her—or Lord forbid freak her out—he pressed a little more. Her hands moved up his forearms until she held onto his wrists, but she didn’t move or push him away. She kissed him back lightly, maybe a little unsure. But then her lips parted, and he had to bite back a groan.

Oh hell, she tasted so good. The salt from her tears mixed with a flavor he instinctively knew was pure Laine. He wanted more, needed more…

But instead he pulled away and cautiously rested his forehead against hers. She met his gaze, and the tears welling in her beautiful brown eyes nearly broke him. She burst into tears at that point. Tye held her, rocked her. Tried to ease a bit of the anguish she held inside.

But he failed at that, he knew it. Whatever it was that had Laine so scared was bigger than anything a hug and gentle rocking could take care of. She’d cried only a few minutes, just enough to let a little of it out, then drifted off again.

Two hours later, the sun began to rise as Tye stared out her hospital room window, listening to her strong, even breaths. She thought she was going to leave this morning, just take off to who-knew-where, but he knew better. After he got a glimpse of her fear, there was only one place he’d be comfortable with her going.

He’d told himself a dozen times over the last hour that the idea of bringing her there had nothing to do with him kissing her, and had even less to do with the way she kissed him back. He’d put up a good front, even in his own mind. But in his gut he knew he’d been lying to himself.

He wanted her. And not in just a I want to lay you down and take you in a hundred different ways want. No, this was an I’ll protect you. Please God, let me protect you and keep you safe want.

Deep down he was conscious of his need to do that, even though he had very little time to process the desire. As he looked at her now, curled up underneath the stark white institutional sheets and blanket, a head-banging revelation shot straight through his heart.

If there was ever an award for cluelessness, he’d win it. Hands down, with no contest. He’d been an idiot. A certifiable, no-holds-barred fricking idiot. To not tell her how he felt in the first place… Damn it.

As the man who would do anything—anything—in order for her to have everything she ever wanted or needed.

By Kristin Daniels at November 02, 2012
Email ThisBlogThis!Share to TwitterShare to FacebookShare to Pinterest

I'm so glad you're blogging with us again and feeling better, Kristin! Congratulations on the new book and beautiful cover! I love the excerpt! Great photo too! :)