Stirling Castle is a royal castle that stands high on a volcanic crag over the plains below. In the past, this site was one of the most strategic locations in Scotland. It was said that to hold Stirling was to hold Scotland. Because of this, it was attacked fairly often and was the focus of the important battles of Stirling Bridge in 1297 and Bannockburn in 1314. From the 1100s, Stirling was one of the favorite homes for kings and queens in Scotland. It includes an interesting group of buildings which were built in the 1500s for the Stewart court. In the 1600s after the king decided to live elsewhere, Stirling was converted into a garrisoned fortress for soldiers.


Stirling has been described as ‘a huge brooch clasping the Highlands and Lowlands together.’ It overlooks Stirling Bridge, and hundreds of years ago, controlled who was allowed to cross the River Forth. The castle played a key role in the Wars of Independence and was extremely damaged. It was rebuilt several times and this is why only the later buildings survive above the ground.


The beech tree seen above is over 200 years old.
Shown above is the Inner Close and the King's Old Building which dates to 1496 and housed the royal apartments of King James IV.

1538-42 James V had this building, the Palace, built for himself and his French queen, Mary of Guise. He wanted to send a message to the world: that he was a wise and virtuous ruler. The king decorated the outside of the palace with over 250 sculptures designed to proclaim the peace, prosperity and justice of his reign. 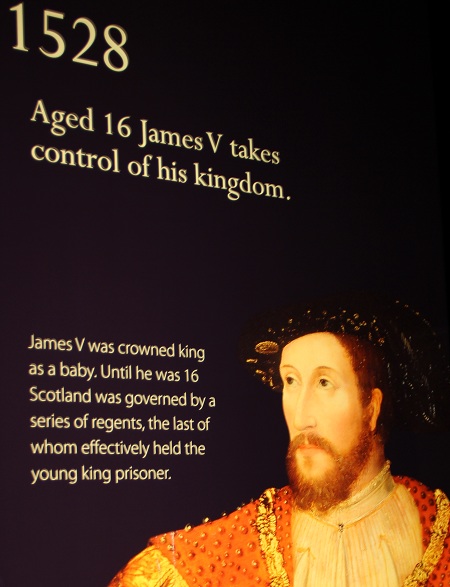 The upper floor of the Palace is where the Stirling Heads Gallery is located. It is like a museum and a great place to learn about courtly life during the 1500s. Below are some quotes from the posted information. 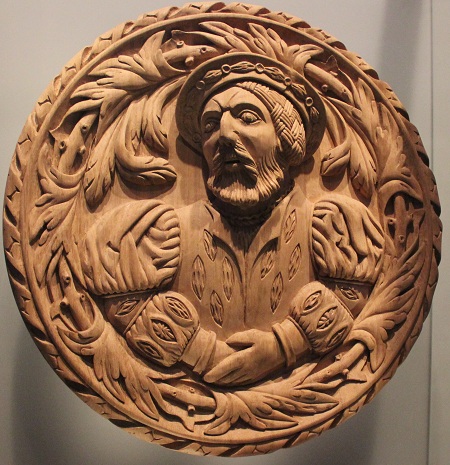 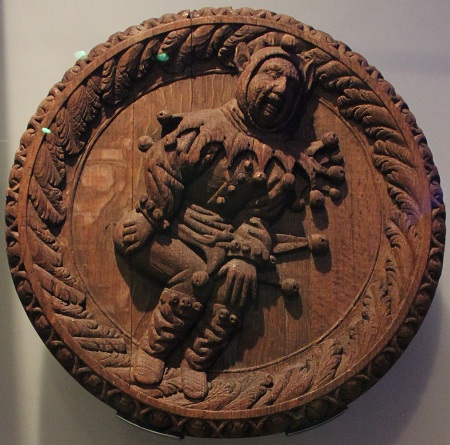 "‘Virtue and good actions… good training and… an array of family portraits,’ these were the qualities of a Christian prince in the 1500s. Making and exchanging portraits was an important part of political strategy. Portraits were given to seal political alliances and formed part of the negotiations of marriage contracts." 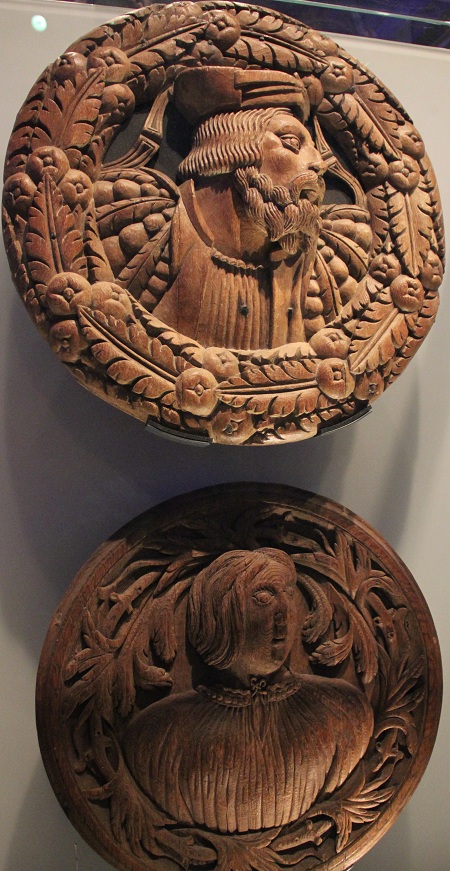 King Henry VIII of England celebrated his geneology in a similar way to James V. But whereas Henry VIII could point to only two generations. James V could claim a long and unbroken family line going back to Robert II, the first of the Stewart monarchs. 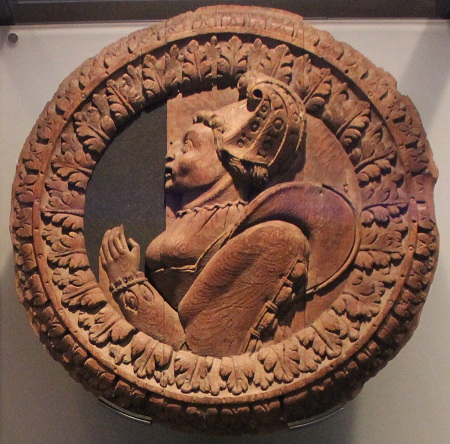 Over a period of ten years Historic Scotland, together with other experts, has undertaken detailed research into the Stirling Heads, the sculptures and the palace. What you see today is the result of careful analysis by historicans, archaeologists and conservators to reveal some of the meaning behind James V’s elaborate design for his palace. The knowledge has enhanced our understanding and helped establish the designs used to recreate the rooms and ceiling of the palace. 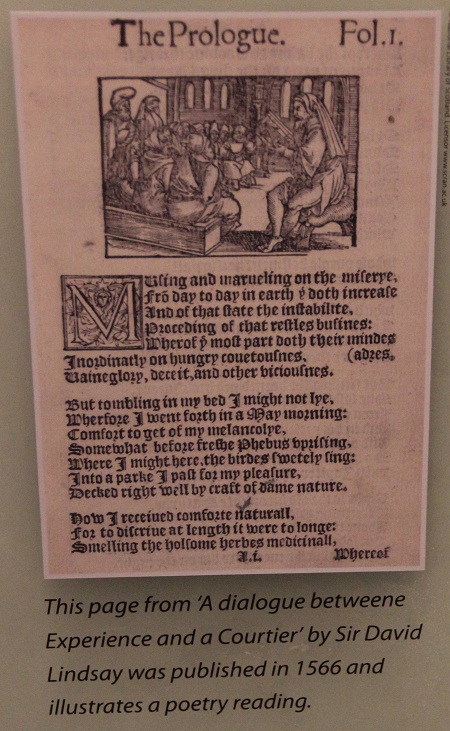 Experts used tree-ring dating technique known as ‘dendrochronology’ to analyse the oak from which the Stirling Heads are carved. They discovered that the timber was grown in Poland and felled in 1539 before being brought here to be carved. 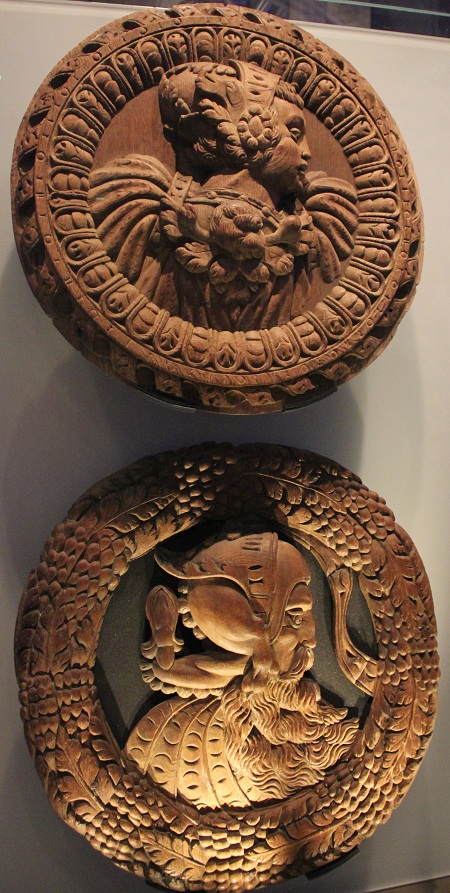 State-of-the-art 3D laser scanning recorded every detail of a Head. Painstaking analysis has shown that the Heads were originally painted. Although the carvings have lost most of their decoration some tiny paint fragments still survive. From studying these, experts have discovered a little about how the paint was originally applied, helping to build up a picture of the likely original colour scheme in the palace. 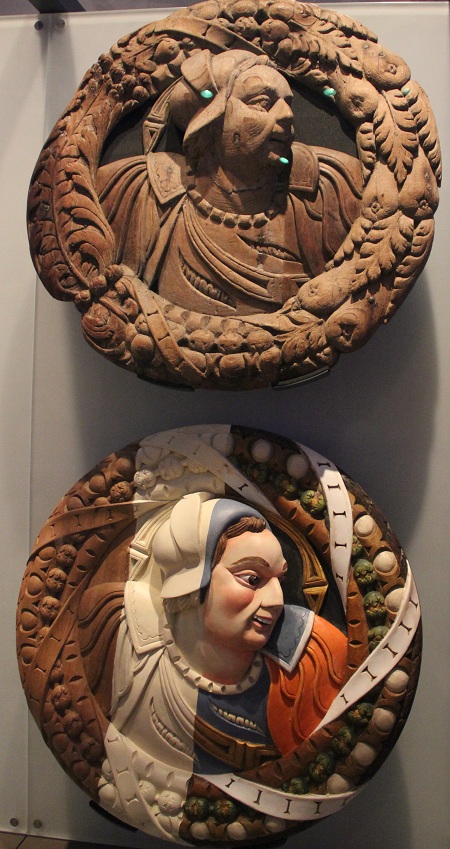 These Stirling Heads were designed to reinforce James V’s credentials by aligning him with other powerful men. Two of them probably represent his ancestors, while the others depict men of power and influence. By Displaying his friends in high places, the king affirms that he, like them, is one of the most powerful leaders in Europe.

The more ancient and unbroken the line of royal ancestors to which a king could lay claim, the less likely that his authority could be disputed. Portraits were a valuable way of demonstrating this inheritance.
One of the Heads may depict Charles V (1500 – 58) who was Holy Roman Emperor and heir to four of Europe’s leading dynasties. Throughout James V’s lifetime, Scotland was caught in an ever-shifting balance of power between France, England and the Holy Roman Empire. By including Charles V in the Heads, James made it clear that he was standing shoulder-to-shoulder with the most powerful ruler in Europe. 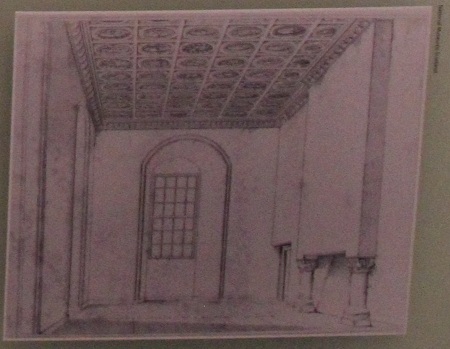 In 1777, the enormous weight of the Stirling Heads caused part of the ceiling in the King’s Inner Hall to collapse. This drawing, from 1817, is the earliest attempt to suggest how the ceiling may have originally looked. 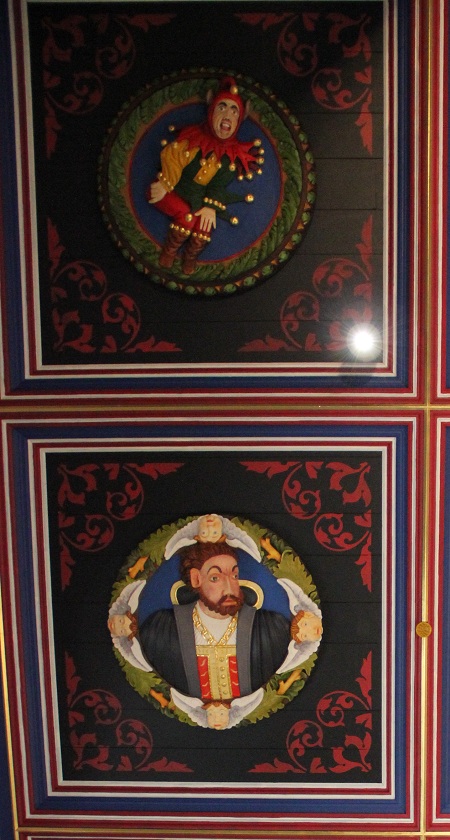 Now, the King's Inner Hall has been redone and restored to what is believed to be its original freshly-painted condition, including the heads on the ceiling. You can compare the original Jester to the redone, painted jester above. 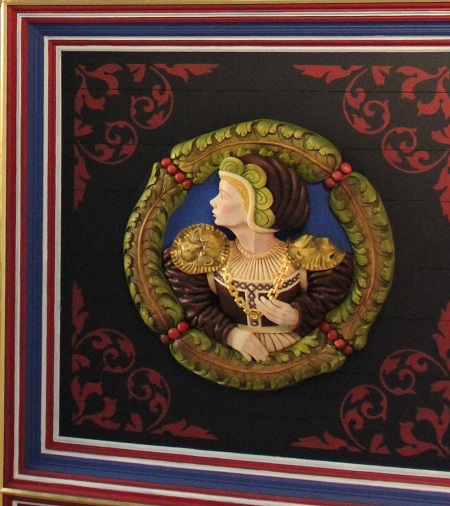 James V stands on the north-east corner of the Palace. (Below) This sculpture is supported by a square column decorated with a floral motif. He stands beside the classical gods Saturn and Venus and looks down on visitors. Saturn and Venus symbolize peace and plenty. The art and architecture was influenced by the palaces of France and ancient Rome. 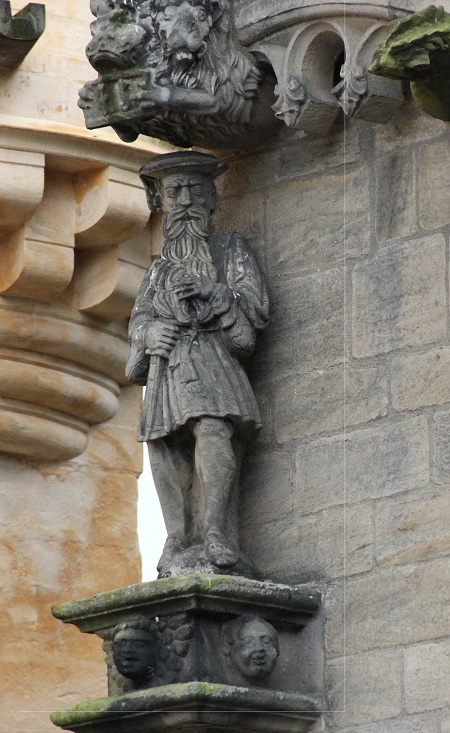 I hope you enjoyed this visit to the Palace at Stirling Castle. I have more photos to show of the restored interior of the Palace next time.
Thanks!
Vonda
www.vondasinclair.com

P. S. James V's grandson, James VI & I is a secondary character in my novel, My Wild Highlander!

Lady Angelique Drummagan, a half-Scottish, half-French countess, has suffered much pain and betrayal in her past. She wants nothing to do with the sensual Scottish warrior that the king has ordered her to marry because the rogue could never be a faithful husband, but she has little choice in the matter. Dangerous, greedy enemies threaten her from all sides and she's in dire need of his protection.Sir Lachlan MacGrath, known as Seducer of the Highlands, possesses a charming wickedness and canny wit which has earned him much popularity. After the king decrees that he wed the fiery hellion, Lachlan discovers there is one woman who can resist him--Angelique. Can he break through her icy façade and melt her heart, or will the dark secrets lurking in her past not only cost them their future together, but their very lives?

A. Will: "What is it about the bad boys that women desire? The second book in Vonda Sinclair's Highland Adventure series proves to be a phenomenal read! ...I am amazed at Ms. Sinclair's ability to weave such a beautiful storyline that it enveloped me into the world of 17th Century Scotland. She is quickly becoming one of my favorite authors and I can't wait to read more from her."

Your photos are always so beautiful. Great information. Thanks.

Thank you, Roxy! I'm glad you liked it!

Another great article, Vonda. I loved the hours we spent at Stirling Castle. Thanks so much for sharing.

The artwork is amazing and that it has remained over the years - what a treasure.

Great post. The pics were great. Thanks for posting.

Thanks, Paisley! It is an amazing place! And it does take several hours to see and take in everything. I love seeing the original artwork.

Thank you for checking it out, Rose!

Carole, thanks! I'm glad you liked them!

What an experience you had. Thanks for sharing this magnificent photos.

This was a really interesting post, Vonda. All the carvings and stonework is amazing. Who knew they had to work so hard to convince people they were worthy of their throne. Thanks for posting!