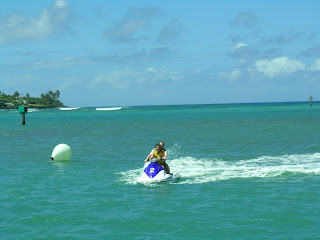 Many colleges still have swim tests for graduation. I attended Cornell University, where such a requirement was in place and still is today. The test is something you take during freshman orientation. If you don't pass, you are automatically signed up for swimming lessons. (The school also requires 2 years of physical education, which does not count as an academic class for graduation.)

People who often have trouble with the test are students from large cities, where pools or swimming locations are not present and the student never learns to swim. Such a student sued MIT a few years back, but lost.

I also attended Columbia University as a graduate student. There was no swim requirement. That discrepancy makes the rule seem a little arbitrary. The undergraduates need to have this life skill, but the graduate students don't?

On the other hand, I included the above picture of my husband and dd jet skiing in Hawaii for a reason. Think of all the activities you won't feel comfortable enjoying if you can't swim. That's in addition to the fact that you are risking your life. You'll miss so many fun adventures if you're afraid to get in the water.

And there's this: Once I was jet skiing with my husband in Puerto Rico (on the same machine). He decided to race with his buddy. I begged him to slow down, but his middle name is "Thrill Seeker" and mine is "Coward". I was so angry I jumped off in the middle of the Atlantic Ocean and swam to shore. Who knows. If I couldn't swim, I might be divorced today! (j/k)

So, on balance, I vote for the swim requirement. Though it may be painful if you can't pass the test originally, you'll be better off in the long run if you know how to swim. And the schools who have the test all have lessons to teach you.

What do you think?

Interesting post! I didn't know about this. I attended a college that didn't have this requirement. But I definitely think knowing how to swim is important. I took lessons years ago but still wouldn't want to swim out of the ocean. I'm not that good. LOL