A lot of firsts for a little Quickie. 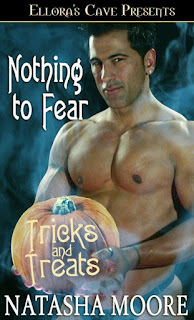 Kelly froze in the doorway as a tall masked man, dressed from head to toe in black, stepped away from the bed. A black hood covered his entire head except for holes for his eyes, nose and mouth. The sleeveless black T-shirt clung to his sculpted chest and his muscled arms were tanned. Black pants and shoes completed the intimidating outfit. Her heart pounded so loudly she couldn’t hear what Lisa was saying. “Dress? Did you say something about a dress?”

“Jeans and sweatshirt just don’t project the same image as a dress,” Lisa said, already walking toward the hallway, ignoring Kelly’s pleading look. “Gotta run. You and Mason can work everything else out.” She glanced at her watch. “You’ve got less than half an hour before the first group will be coming through.” Then she was out the door, shutting it behind her.

The slam of the door echoed in the silence. Kelly turned around slowly and looked up into the deep, dark eyes staring at her out of the mask. Of course, it was Mason. Her hands shook as she clasped them together in front of her. Oh God, it was Mason.

He slid the mask off his head. His eyes were what had first attracted her to him, and they were still like melted dark chocolate. His head was shaved smooth as always, a dark shadowy hint of hair on his head and jaw. The diamond stud in his ear twinkled beneath the light from the chandelier.

“Hello, Kelly.” His deep voice was a touch amused. Well, she didn’t find anything amusing in the situation. He was the one man whose mere touch frightened her because it made her desire things she shouldn’t want. Made her crave things she didn’t understand. Just a glance from him made her weak in the knees and made her want to drop to her knees before him.

And right now the thought of being tied to that bed with Mason standing over her froze her to the spot at the end of the bed. She avoided his eye, but in doing so focused on the bed, the black velvet bedspread, the tall thick bedposts at each corner. Would he stretch her tight when he tied her to the bedposts? Or would he give her wiggle room? And the thought of her body wiggling beneath Mason’s heated gaze made her shiver. But was it from fear? Or excitement?

“You better get changed.”


Nothing to Fear is still available to download from Ellora's Cave 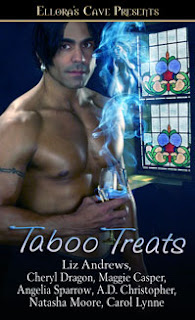 Or in print as part of Taboo Treats.

By Natasha Moore at October 15, 2012
Email ThisBlogThis!Share to TwitterShare to FacebookShare to Pinterest
Labels: Ellora's Cave, Halloween, Natasha Moore, Nothing to Fear, Quickie