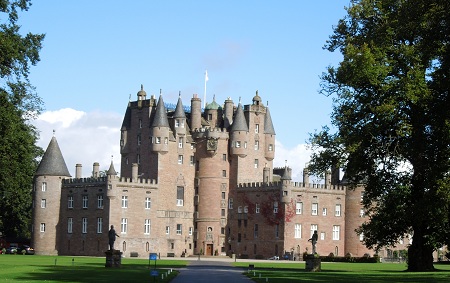 Angus is called Scotland’s birthplace because on April 6, 1320, the Scottish Declaration of Independence was signed by the Scottish nobility in Arbroath Abby in Angus. The Scots declared their nationhood and right to self-government and sent it to the Pope because they were trying to throw off the rule of Edward II of England.

Glamis (pronounced Glams as in glam rock or glamour) has been a Royal residence since 1372 when Sir John Lyon was granted the thaneage of Glamis by King Robert II. Four years later, he married the king’s daughter, Princess Joanna. 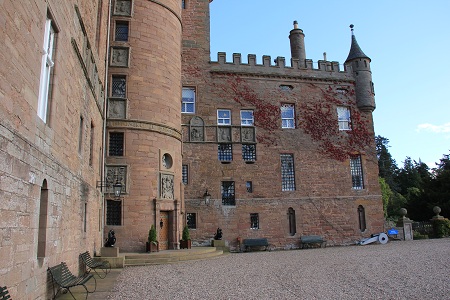 Glamis, a pink sandstone L-shaped tower, is built on the site of a Royal hunting lodge, where in 1034 King Malcolm II was murdered. The structure was remodeled during the 1600s and the central part would’ve looked much like it does today, but it has been built onto and extended over the years.

“The house from the greatness of its mass, the many towers atop, and the spread of its wings, has really a very singular and striking appearance, like nothing I ever saw.” Thomas Gray (1716 – 1771) 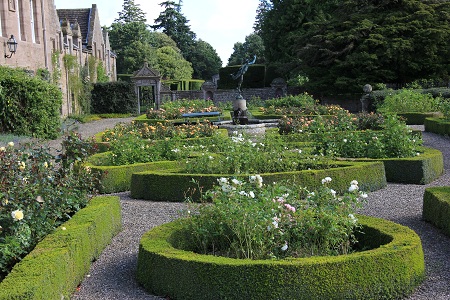 We visited Glamis on a bright, sunny day. The weather was so nice (and knowing how quickly Scottish weather can shift) we decided to tour the grounds first. We walked along the front and the side of the castle, taking photos the whole time. We passed the Forecourt and Dutch Garden, a formal boxwood and rose garden created in 1893. A statue of Mercury is the focal point. This is the family’s private garden. 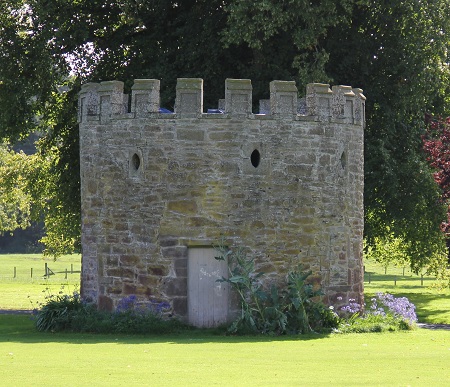 Two of these circular turrets stand on the front lawns. They used to mark the corners of the old walled gardens. 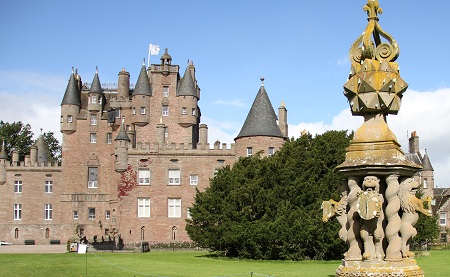 Other surviving parts of the old gardens include this incredible 17th century sundial and the old yew tree behind. 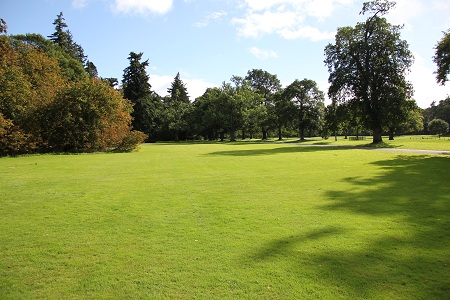 Five hundred years ago, the castle was surrounded by extensive walled gardens created by the 3rd Earl in the late 1600s. In the 1700s the 9th Earl replaced these with a landscape park. Many of the huge conifers were planted by the 13th Earl after 1865. 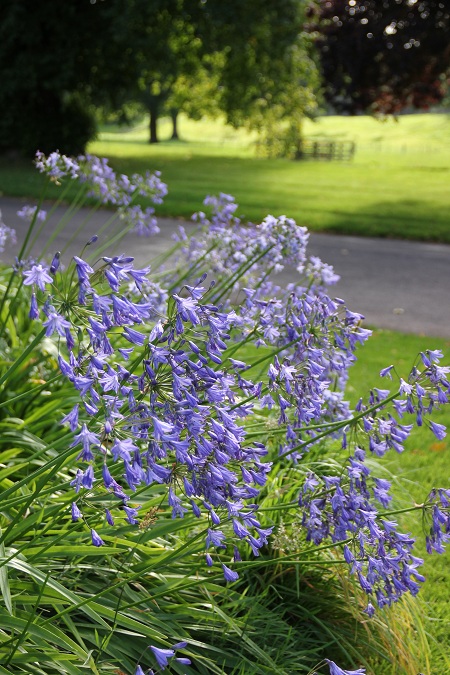 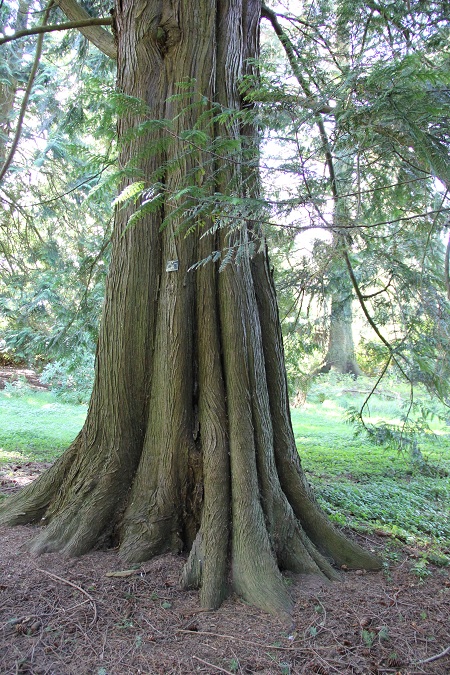 We walked along the nature trail and into a small dark forest with trees hundreds of years old. It was very quiet and mysterious inside. There is also a pet cemetery. Scots LOVE dogs and you will often see cemeteries for these beloved pets. 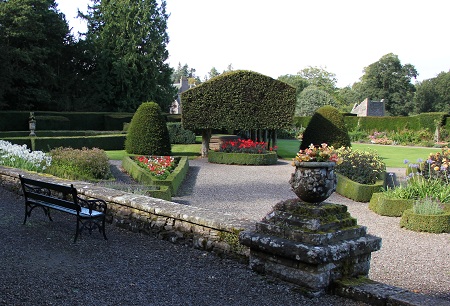 After leaving the wood, we visited the amazing Italian Garden, a formal garden designed in 1910 by Arthur Castings and laid out by Countess Cecilia, the Queen Mother’s mother. It is bordered by yew hedges, and includes a raised terrace between two small gazebos. There are fan shaped parterres separated by gravel walks, and pleached alleys of beech, a stone fountain and ornamental gates which commemorate the Queen Mother’s 80th birthday. 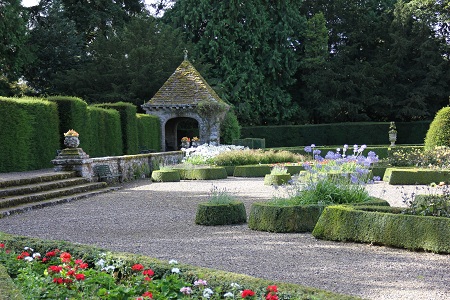 I couldn’t get enough photos of this beautiful place, especially the two moss-covered gazebos and the thousands of flowers, butterflies and bees. 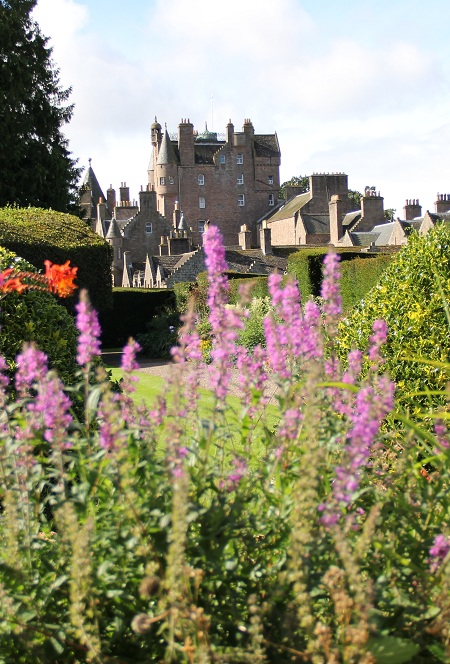 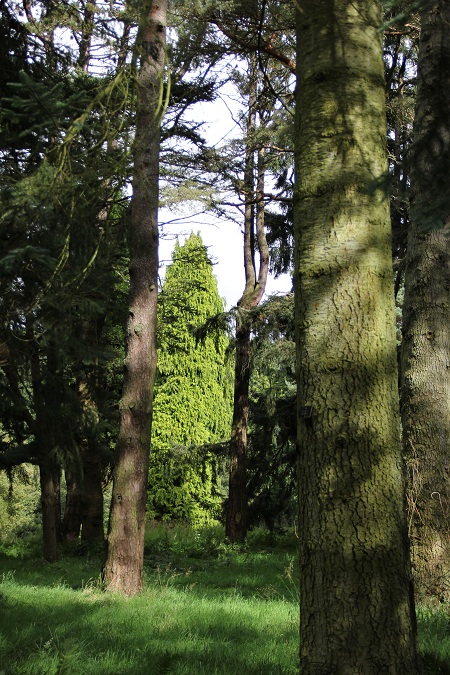 We walked through the Pinetum, a collection of exotic trees and conifers, many of which are native to North America, planted by the 13th Earl around 1870. We crossed Glamis Burn, a small clear stream, along the way and then came to the Water of Dean, another small burn which drains the Loch of Forfar and flows into the River Isla. The bridge we crossed here is the Earl Michael Bridge, originally built in 1890 and reopened by the Queen Mother in 1996 after restoration by the 18th Earl. 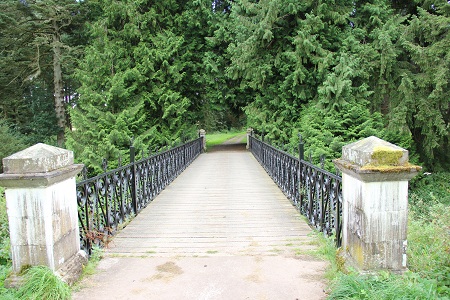 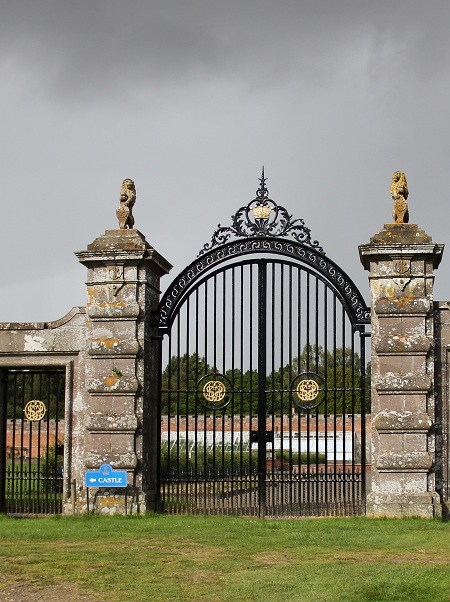 These are the gates that lead into the walled kitchen garden. These are mostly grassy areas now but there are plans in the works to restore it. Did you notice the sky in these two photos, above and below? Yes, rain was on the way and we were looking for shelter. We found it in the closed doorway to what appeared to be a hothouse (no visitors allowed inside), since the wind was blowing from behind the structure. It was only a short, misty shower and a few minutes later we were ready to finish our walk. 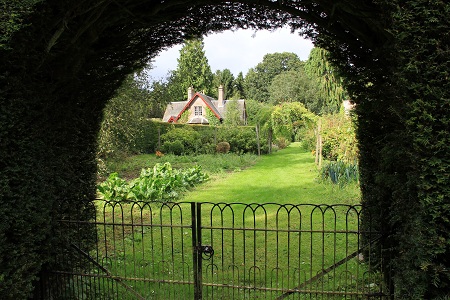 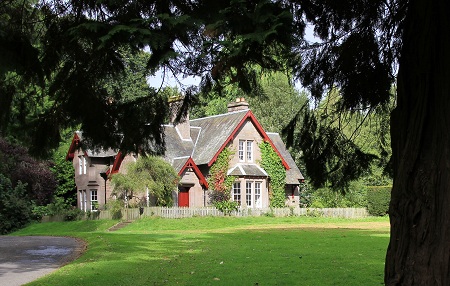 We saw this beautiful privately owned cottage along the way. We walked through more woods and to another bridge, then along a road that bordered the Highland cow pasture. 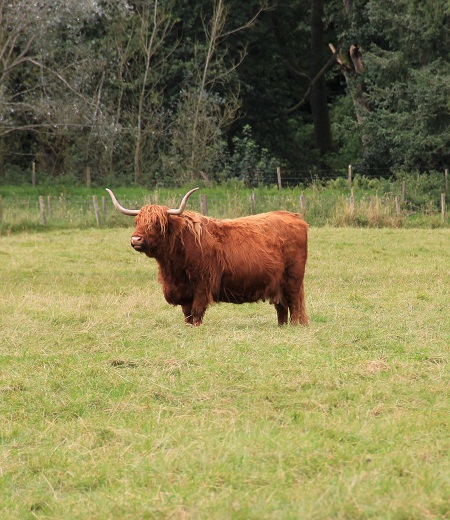 Next it was time to eat lunch in the castle's Victorian Kitchen Restaurant and take a guided tour of the castle itself. The tour guide was very gifted with the art of revealing interesting and entertaining history as we walked through the many beautiful, opulent rooms. No photos were allowed inside, of course but I've found some online. We started our tour in the dining room. And then visited the drawing room. The most interesting painting was one where the 3rd Earl wished to be painted as if he were wearing leather armor that made him look naked, with rippling, bulging muscles. Hmm. Guess he wanted to be eye candy. This is said to be a Romanesque tunic, with lion epaulettes. Click here to see the painting. It was painted by Dutch artist Jacob de Wet in 1683. The earl's sons surround him and he gestures toward Glamis, the castle he restored and remodeled. If you look closely you will see the castle looks almost as it does now. This is made more interesting by the fact that this earl's father, the 2nd Earl, was one of the richest peers in Scotland, but when he died, he was one of the poorest. When the 3rd Earl inherited this property, it was forty-thousand pounds in debt. But he worked diligently for the next forty years restoring both the estate and the castle, along with his wealth.

We visited the Chapel, the Billiard Room, King Malcolm's Room and many others.

My favorite room was the Crypt. This room is the most ancient part of the old castle and the walls are 16 feet thick. It is filled with hunting trophies from Victorian times, suits of real armour and breastplates used in battles, saddles and other fascinating items hundreds of years old. Also, the Secret Room of Glamis is located here.

There are many legends about Glamis, some true history and some that were surely embellished over the years. The tour guide told us the story of the Secret Room. A man known as Earl Beardie, who was either Alexander Lyon, 2nd Earl of Glamis, or Alexandar Linsday, 4th Earl of Crawford was playing cards late on a Saturday night. It is unclear who he was playing with. He was warned by either family members or servants to stop playing at midnight so that he wasn't committing the sin of gambling on the Sabbath. He refused to stop playing. One story says he played cards all night with the devil. Another says he and his companion played cards well into Sunday and the devil came along and walled them up in one section of the room so that they could play cards until doomsday. From outside the castle, a window can be seen in that area, but not from inside. There is rock wall blocking off the window and the section leading to it. The tour guide assured us that many people had reported hearing noises coming from behind the wall on Saturday nights and that most refused to enter the Crypt on Saturday nights.

Another source says the hidden room was where one of the Earl's deformed children was kept imprisoned so no one would see him. Still another source says what happened was that Ogilvie clansmen were fleeing their Leslie enemies and asked for refuge at Glamis. What they didn't know was that the Earl at the time was friends with the Leslies and he had the Ogilvie clansmen walled up and hidden, where they died of starvation. It's difficult to know what the truth is but I believe all legends contain some truth. Only the Earls know what is truly behind the wall.

I hope you've enjoyed this tour of Glamis!
Thanks!
Vonda
www.vondasinclair.com

My book, My Fierce Highlander is on sale for 2.99 at Amazon and B&N for a limited time. 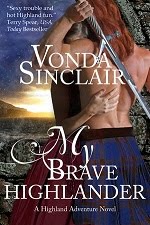 What an idyllic castle! Not a bad place for a childhood home. As usual, another round of delightful photos and commentary, Vonda. I know how much time it takes to put such a post together. Thanks for doing this. It's wonderful!

Thanks, Pat! It does take some time but it is enjoyable! :) We loved our visit to Glamis!

Such beautiful pictures. I'd love to see if they have a solar there.

Thanks Ella! It would be interesting to find out. A solar wasn't mentioned on the tour, but if there was one in the medieval part of the castle it may have been converted into another room. ?? I don't know.

Thank you for sharing your wisdom and travels. What fun that crypt would be on All Hallow's Eve! ;)

(I can talk brave cuz I'm not anywhere near there!)

Thanks, MJ! The crypt was fascinating but also scary at the same time. :) I would like to know what kind of sounds are heard on Saturday nights.:) I wish I could've taken dozens of pics in there. There were lots of interesting items.

Thanks for the great pics, Vonda! I really want to live in that cottage next to the castle. :-)

WOW these are so beautiful especially the ones with the flowers in the front with the castle in the back. It shows your love of flowers. Deep sigh!! I do wish you would have taken me out of your pocket that day. ;) Thanks for sharing.

Thanks for checking them out, Vanessa! I'd love to live in that cottage too! It's so pretty! :)

Thanks, Paisley! I love taking pictures of flowers! You should've come out of my pocket more and taken in the view. LOL

So fabulous! Makes me want to jump on my horse and go for a ride (with the dogs following along, of course!). Thanks so much for sharing these beautiful pictures with us.

Beautiful photos, as usual, Vonda. I can only imagine how gorgeous this place must have been in person!! (You lucky girl)

Thanks Ally! I'd like to do that too, if I knew how to ride a horse. :) It looked like it would be a great place for horse riding anyway.

Thanks Randy! Yes it was truly beautiful in person!

Gorgeous pictures!!! And I got to see Glamis when I went to Scotland. And too pictures of the Highland Coo too. Beautiful place!
Thanks so much for sharing.
Teresa R.

Thanks, Teresa! I'm glad you got to see Glamis! Isn't it amazing?

Vonda, thank you so much for another beautiful castle. Your pictures are stunning as usual. Scotland is on my bucket list.