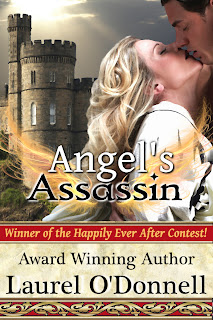 Laurel O'Donnell has won numerous awards for her works, including the Holt Medallion for A Knight of Honor, the Happily Ever After contest for Angel's Assassin, and the Indiana's Golden Opportunity contest for Immortal Death. The Angel and the Prince was nominated by the Romance Writers of America for their prestigious Golden Heart award. O'Donnell lives in Illinois with her four cherished children, her beloved husband and her five cats. She finds precious time every day to escape into a different world to bring her characters to life in her writing.

Q: Welcome, Laurel! Please tell us about your latest release. And do you have a review you could share with us?
A: Angel's Assassin is the story of redemption.  It's a story about Damien the assassin who longs for freedom, but discovers he wants more when he meets the woman he is to kill.
Blurb: Damien is an assassin, a man with no home and a tortured past. Sold into slavery as a young boy, he is trained to kill with cold calculation, without remorse. As a reward for his ruthless success, he is given a chance to earn his freedom from his cruel master. One last mission. One final person to slay…
Lady Aurora of Acquitaine is the epitome of purity and goodness, beloved by all her people. She lives her life trying to atone for her mother’s cruelty by being a fair and just ruler. Secretly she fears that one day her mother’s murderer will return for her.When Damien enters Aurora’s life, tempting her with promises of dark passion and forbidden lust, he threatens to tear her peaceful world apart with shadowy secrets of his own.Can Aurora’s light heal Damien’s dark spirit or will his evil consume her? The eternal battle of good versus evil, love versus hate, dark versus light, all come to a shattering climax in this historical romance set in medieval England.

Angel's Assassin is available at Amazon.
I'd like to thank all the authors at Fierce Romance for allowing me to share Angel's Assassin with your readers.  Thanks everyone!  :)
What a wonderful and intense excerpt! Thanks so much for being our guest today, Laurel! Everyone, please visit Laurel online:
Website - www.laurel-odonnell.com
Blog - www.herstorycalls.com
Twitter - http://twitter.com/laurelodonnell
Facebook - http://www.facebook.com/LaurelODonnell.author

Vonda -
Thanks for having me! Hope your readers enjoy the interview and excerpt from Angel's Assassin.
Laurel

Thanks so much for being here to visit with us today, Laurel!

I love this series and yes I'd certainly read more medieval romance and I love series.

I've never read a medieval romance. Perhaps it's time I start. Sounds interesting and I love the cover.