Hurricane Irene: Gone but Not Forgotten

I live in Massachusetts. We spent last weekend girding for Hurricane Irene. Mostly, my efforts were focused on trying to get my father off Cape Cod, which was forecast to receive a direct hit from the hurricane. Was I thinking about my home in Vermont? Not at all.


Sunday evening, my friend from Vermont called. Her voice was shaking. She said she'd driven over to our house and we had 15-20 feet of water in our back yard. What? I couldn't believe her. My house, which had been two blocks from the lake was suddenly a waterfront property? She sent me a picture. I was convinced. She said the covered bridge a different two blocks from my house was flooded. She couldn't get there because all the roads around my house were closed due to flooding. We concluded she was mistaken because the bridge is at least 40 feet from the river. Teens jump off as a dangerous dare.

You can see in the top picture the river as it forms a waterfall and flows under the bridge. The building is the Simon Pearce Restaurant, a gourmet destination restaurant and also the home of the Simon Pearce glassworks. (Though the restaurant was spared, the glassworks was completely flooded.)
Here are two pictures of the bridge, one on either side, now: 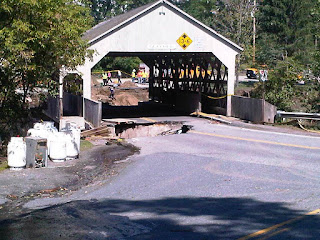 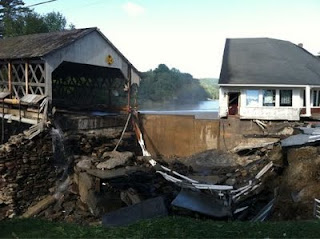 Yes, it was flooded. As was the other historic covered bridge one town over. See those white tanks in the picture? Hundreds of propane tanks (from a supplier 15 miles upriver) were floating down the river, along with trucks and trees and refrigerators. This bridge was the route I used to take for a ten minute walk into town.

My daughter got on her phone. She had friends who said they were marooned in their homes. This turned out to be true. In the past week, some Vermont towns had to have supplies airlifted to them when all the roads were flooded and people couldn't get in or out. (Vermont, a relatively unpopulated state, does not have a large number of roads.)

Sadly, 3 or 4 people in this one small state did lose their lives in the storm. So I'm not going to say this video is the saddest thing. http://www.youtube.com/watch?feature=player_embedded&v=WyO18one8fU
But it is eerie. The covered bridges are a unique historical treasure in Vermont.

Brattleboro was flooded badly. It took the national news a couple days to realize what had happened in Vermont. All of the best pictures are from amateurs.


And here is the golf course that used to border my house. This picture is a day after the flood. The course was destroyed.
By Carly Carson at September 04, 2011
Email ThisBlogThis!Share to TwitterShare to FacebookShare to Pinterest
Labels: Carly Carson, covered bridges, Hurricane Irene 2011, Vermont

Thanks for sharing this, Carly. Such a loss of heritage, both the bridges and more importantly in the lives of the people. We each carry such a great amount of history with us, and there's so much people take with them when they go.

Amazing photos and video! We were expecting up to a foot of rain in our part of NJ, but got nearly 24 hrs of strong wind instead. Personally, we got off easy with nothing more than loss of power for 6 days. I hope your vacation home is safe. I hate to see the devastation of so many historic landmarks. Now, if only Katia would go somewhere else!

Oh yes, we're fine, thanks. We were lucky. My husband went up there the next day just to check everything out (took most of the pics).

Roz, I don't consider 6 days without power to be a trivial thing!

My friend in Vermont showed us pictures of Rt 7 and Rt 4 to Killington; both roads were completely wiped out. Looks like roadwork is going to be the major employment opportunity there for a while.

Ack. I hate to see these tragic photos. I'm so glad you and your family are okay.

Yes, Amber. Route 4 is one block from my house. Killington-Mendon was totally isolated. It seems funny to think of a mountain being done in by a flood.
Thanks Nicole. Luckily it can't happen too often.

Dang Carly! I don't think anyone thought Vermont would get hit as hard as it did, and I'm just stunned at the damage. Glad everyone is okay!