Blade of the Wolf review 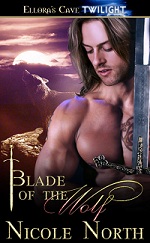 Holy HOT! Nicole North delivers one scorchin' romance between two forbidden people: an immortal Scottish werewolf protector who is sworn to protect one powerful clairvoyant woman living in a small, southern US town, unknown to herself that she was held in highest regard by the Sgian Dubh Guardians as a Protected One.

The blurb does a great job at giving the overall idea of the story, so instead I'm going to just focus on the literary aspects of Blade of the Wolf.

Blade of the Wolf is a darker, edgier paranormal romance, making it different than what Nicole has previously written. And she did a great job at creating it. Right from the beginning, there's intrigue, mystery, and action. With each passing page I was left in suspense and seriously hating the villain even more than I did in the beginning. With that being said, I have to additionally comment on the depth of the characters that Nicole creates.

Heroine, Syrena, is unique in her own right. She's not the "typical" size 2 heroine that we often see, but a size 12, which I found refreshing. And I loved the fact that Ronan, a sexy alpha, found her to be the most beautiful thing he'd seen in centuries. The chemistry between the two was obvious and heart-felt at times. Even though their coming together was against the rules of the Sgian Dubh Guardians, and carried heavy -- and sometimes deadly -- consequences, their love was worth the risk for each of them.

The heat is scorching hot in Blade of the Wolf! You can only imagine that denying attraction between two people can be a firework just waiting to go off, and in this story that's exactly what happens. And then again and again. *g* Be prepared for lots of explicitly graphic lovin', especially since it's needed to help lure in the utterly evil, villainous incubus hell bent on stealing the powerful psychic energies hidden deep within Syrena.

The paranormal and magical elements of Blade of the Wolf were almost complex in nature, which always kept me on my toes and completely engaged in the differing dynamics. The hero was a member of the Sgian Dubh Guardians, their immortal Were lives dedicated to protecting psychics against ancient evil. The inclusion of a very villainous incubus added a different paranormal twist as well. But what really stuck out to me was the fact that Nicole also takes her magical elements to a whole 'nother plane of existence-- literally! The ability for both good and evil to have the ability to exist and travel between planes for their own personal use added an air of chilliness and unusual twist.

Additionally, I enjoyed that Nicole brought the immortal highlander to a small town in the southern US. Although, being the Scotland highlander kind of girl that I am, I hope we get to learn more about the secret Guardian stronghold in the highlands in future reads. And speaking of future reads, I really can't wait to get fellow hotty Guardian Caerk's story in the future. This immortal highlander is sure to have a hot and edgy book, primarily for the fact that he is the only Guardian that is both were and vampire! Did I also mention that he was yummy? :)

Overall, I really enjoyed this story!! Nicole has a way with building suspense, unraveling plot lines and creating characters. The paranormal and magical kind of elements created for an engaging read where I was always wondering what Nicole would give me next. With Blade of the Wolf I appreciated the dark, edginess that she brought to the story, but also added a fabulous dose of very sexy romance and sexin'. Did I mention there's sex on the ceiling in this story? :) Yep, be prepared to be all sorts of warm while reading!!
Tanya, Among the Muses

Blade of the Wolf:
Ronan, immortal werewolf and Scottish Sgian Dubh Guardian, faces his most challenging, yet enticing, mission in centuries. He must protect sexy clairvoyant medium Syrena Ellis from an evil incubus intent on stealing her powerful life force. She awakens a raging arousal in Ronan, but if he gives in to temptation, he will be punished.

Syrena's forbidden desire and scorching lust for Ronan could destroy them both.