Guest, Kerri Nelson: How to Make a Momwitch + Giveaway! 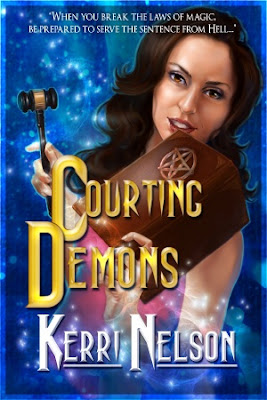 Recipe for making a Momwitch:  Mix one jilted wife with twenty years of nearly forgotten magic and a spread on a passion for vengeance topped with one bad hubby and you’ve got the makings of a Momwitch!
Mom’s have it rough.  There’s no doubt about that.  Day in and day out we do countless tasks, most for which we are never thanked.  We work hard.  As the mother of 4, I know this for a fact.
So, what would it take for you to give in to your dark side?
A cheating spouse?
Road rage?
Or…maybe just one more dirty dish?
Well, in Courting Demons, you’ll meet a mom named Paisley who became a teenage witch when her only high school friend taught her the ways of the dark side.  But when something tragic happens as a result, Paisley turns her back on magic and subsequently becomes just a regular mom with two adorable children and a house in the suburbs.
That is…until one fateful day when she turns back to magic in a fit of rage and then the darkness takes over her life.  Only, she’s still a mom with kids to protect and meals to cook and dishes to wash.  And now she must babysit a whole new bevy of little demons—when she’s sentenced to punishment for her improper witchy ways.
I think there are times when we could all become a little bit “mom witch”.  So, if you had the choice of one supernatural power that you could use when needed, what would it be?  Would you turn an ex into a rodent (like Paisley)?  Would you stop time?  Move objects with your mind?  Become invisible? 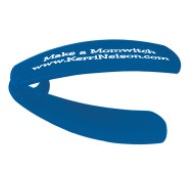 What kind of momwitch would you make?
Tell me all about your mom witchy desires and be entered to win a custom designed “Make a Momwitch” Bread Bag Clip.  It will come in handy for all those days when a sandwich will just have to do for dinner.  After all, us moms need a break from time to time.
Courting Demons
Paisley Barton was already having a bad day before she turned her husband into a rat.

First, she was fired by her boss and then came home to find hubby in the shower with a naked blonde chick. They say that hell hath no fury like a woman scorned but this break-up may just unleash hell on Earth when Paisley casts a spell of vengeance against her philandering husband.

After her spell casting inadvertently opens a portal between dimensions, Paisley finds her family home transformed into a nightly courtroom for settling disputes between demons of the underworld and she’s the judge! If that’s not enough, she’s got to deal with a charming, ancient demon named Camden who wants to be her personal bodyguard while trying to explain her husband’s sudden, mysterious disappearance to sexy police Detective Dalton Briggs.

But Paisley will show them all that an everyday working mom is better equipped than most to deal with the mystical mayhem…and with a tempting demon hottie and a flirtatious young detective vying for her affection, she soon learns that being single again isn’t so bad after all.

“When a wronged wife turns her cheating husband into a rat, you know you have to keep reading! Kerri Nelson offers up a lot of fun and wild magic in Courting Demons!” --Bestselling author Linda Wisdom, Demons are a Girl’s Best Friend


Available 9/15 wherever books are sold but here’s the publisher link—free gift available with purchase of print copy—while supplies last:
http://jupitergardens.com/Courting-Demons-by-Kerri-Nelson-print.html
Author Bio:
Kerri Nelson discovered her love of writing at an early age and soon became a columnist for her local newspaper winning the Outstanding Young Journalist of the Year Award for her efforts.
After a fifteen year career in the legal field, Kerri fulfilled her lifelong dream of publication and is now an award winning multi-published author of nearly every genre under the sun (and moon) and also writes young adult fiction under the penname K.G. Summers.
A true southern belle, she comes complete with a dashing southern gentleman and three adorable children for whom she often bakes many homemade treats.
Kerri is an active member of Sisters in Crime and Romance Writers of America as well as numerous chapters including Futuristic Fantasy & Paranormal Writers and her Presidency of Celtic Hearts Romance Writers.
Read more about Kerri’s books at her website:  www.kerrinelson.com
Follow her on Twitter here:  www.twitter.com/kerribookwriter
Visit her industry blog here:  www.thebookboost.blogspot.com
Giveaway for the day:
Leave a question or comment to be entered to win today’s prize: a custom designed “Make a Momwitch” Bread Bag Clip!
Then, enter to win my book tour Grand Prize Kindle by following me on tour and e-mailing me the answers to each question of the day at the end of tour.  The more questions you answer, the more entries you gain.
Question of the Day:
What is the name of Paisley’s sexy demon bodyguard?
Click here for details on how to enter to win the GRAND PRIZE Kindle at the end of my “Dark Days of Demons Tour.”
Excerpt for Courting Demons
©  Kerri Nelson 2011
By Nicole North at September 19, 2011
Email ThisBlogThis!Share to TwitterShare to FacebookShare to Pinterest
Labels: demons, Kerri Nelson, paranormal romance, witches

Looks like a fun read Kerri. I'm not sure I want to ask what inspires this sort of story. Hehe. Good luck with the tour. I wish you every success.

@derekd~Too funny! We won't go there but you are not wrong...LOL Thank you for stopping by and for the well wishes. :-)

I'm not sure what kind of momwitch I would make. I think it would really depend on the moment. LOL Hopefully, no rats though. My cat loves to catch and doesn't believe in releasing them.

Was it as much fun to write as it will be to read?

Congrats on your continued tour, Kerri!
Mom witch, huh? I'd want to have the ability to put things in order with a click of my fingers - house cleaned, dinner made, dishes washed, laundry washed and folded, and so on - all the things that use up the time that I'd rather spend reading! ;-)
Rebecca
rrgreene62(at)gmail.com

Well, sweet Kerri, you knew I wouldn't be able to pass this one by. NICE name!!! Her bodyguard's name is Camden. I hope you're not pulling off personal experience with this one.

My hubby worries a lot because I don't get angry, I get even. I thin vengeance is power. One day he ran the length of our house (all the windows open) spraying me with the garden hose, laughing all the way because he thought he was funny. Until, he was in the shower later that day and thought he was alone in the house. I reached in and grabbed him by the buns and, well, he claims I took ten years off his life. Sorry, but I laughed all the way to the gym AND he never, ever chased me with a hose again. :)

As for the momwich, I don't know what I would do, but the end result would most likely be a clean house. :)

This book sounds like a lot of fun to read! As for the momwitch, it would be nice to have a clean and organized house, a manicured lawn, oh the possibilites *L*

@Lanae~This was a very fun book to write. Particularly the last few chapters--things start moving very quickly then. And I know what you mean about the cat--I had one years ago that was not a friend to those cute little geckos! Thanks for the comment.

@Rebecca~That's a good one. Instant clean! We could all use that power. Nice to see you again in the blogosphere. :-)

@Paisley~Yes, one of my greatest heroine's names ever! And one of my sweetest friend's name ever. Too cool. :-)I LOVE that wicked tale you shared about hubby's hose...er...buns...er...well...you should put that scene in a book! Hugs & thanks!

@Brenna~I know...I've heard of these things called clean houses but I'm not sure I've really ever had one. LOL Hugs, K.

@Jean~For the manicured lawn that's what my hubby is great at. I call him the "weed man" as he's addicted to pulling weeds from the lawn. If you don't have a lawn friendly hubby--shirtless yard boys are popular too. ;-) Thanks for the comment.

Great subject matter, Kerri! This will be a fun read, I am sure.

A cheating spouse might definitely turn me over to the dark side! Then again I prefer indifference. This sounds like a fun read :)

I think what many mom secretly desires is having clothes that can fold itself and gourmet food that can be made in less than 10 minutes.

@Miriam~Thanks, mate. Wish I could write those sweeping, breathtaking historicals like yours---sigh---I'll just have to settle for those silly demons. ;-) Hugs for stopping by.

@Na~You are right. But fortunately for me--I have a gourmet hubby that can cook dinner and fold his own clothes. I'm super lucky--I know this. :-) Thanks for stopping by.

Our daily prize winner of my Momwitch bread clip was selected via random draw (as in names in a bowl and 3 year old pulls one out shows me and then runs off to color it with crayons) AND the winner is...

Congrats & thanks to all for stopping by please join me at future stops for more chances to win!

Thanks, Kerri. I look forward to receiving the bread clip. I hate those thingy things they use to close those bags. :)

Fun blog hop, just wish I wasn't so late to the party. That "Make a Momwitch" bread clip would have come in handy.

@Kathryn~I have many more to give away. Stay with me for future dates. Those clips are swell. :-D