Duchess of Devonshire - A Regency Menage a Trois 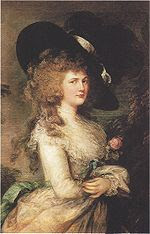 I had been waiting to see the movie, The Duchess , ever since it came out last fall. However, as I’m in a house full of men, I didn’t get the opportunity to see it when it was in theaters. So I was thrilled to discover it in my local Blockbuster when I went in to return my previous rentals, Mama Mia! and Animal House.

Before the movie came out, I was already familiar with the story of the Devonshires. The Duke and Duchess of Devonshire traveled to Bath where Georgiana, the Duchess, met Lady Elizabeth (Bess) Foster. They became instant friends and confidantes. Upon hearing of Bess’s difficulties with her husband (he was threatening to keep her children from her), Georgiana invited Bess to stay with her and the Duke at their home. What resulted was a ménage a trois that lasted over 20 years and included numerous affairs and illegitimate children.

My love of Regency set romances, especially the novels of Georgette Heyer, introduced me to the Duchess of Devonshire and I began to read little snippets about her on the Internet. So when I heard about the movie, based on the Amanda Foreman book, I was all over that. A friend and fellow soccer mom, also a Heyer aficionado, saw the movie the first week it was released. She loved it. And then she saw it again and made me want to see it even more.

So I watched the movie on Sunday night with my husband, who left the room several times and ended up browsing the Internet on the laptop (I knew I wouldn't be able to drag him to see this in the theaters). I loved it—the clothes, the furnishings, the houses, the hair and the hats! All of the elements of an historical drama were there, but ultimately it’s a story about character and a woman very much a part of her time but trapped by its restrictions. Keira Knightley did an exceptional job as the Duchess and Ralph Fiennes created a very cold Duke, who even manages to elicit a little sympathy. (My friend thought he was very sympathetic, but I won’t go that far. I’ll have to watch it again.)

In an interesting twist, Princess Di was a descendent of Georgiana, and their lives have some eerie similarities. I believe at one point the tagline for the movie was something like, "There were three people in her marriage," which is similar to something Diana said in an interview after her divorce from Prince Charles.

And then to make things even more interesting, I was picking up my son from the library today after school and walked by the table with the books for sale. The very first book I saw was Amanda Foreman’s, Georgiana, Duchess of Devonshire! So of course I bought the book for one dollar. I’ve already taken a peek, and there are some wonderful photos and pictures in the book. I can’t wait to read it, although I’ll have to await that pleasure while I read my Rita books first. That’s a subject for another blog.
By Carol Ericson at January 15, 2009
Email ThisBlogThis!Share to TwitterShare to FacebookShare to Pinterest

Wonderful blog, Carol. It made me want to read the book or see the movie.

Carol, great blog!! I love historical movies and I can't wait to see this one.

I read the book months before the movie came out. Great read, though it does dwell a bit much on political squabbles. Still, it's well researched and well written.

I was surprised by how much I liked the movie. My only gripe was that they strayed pretty far from Georgiana's actual characteristics. She was famous for some peculiar speech mannerisms, in particular, and none of that made it into the movie.

Sandy, I highly recommend the movie.

Vonda, I love historical movies too. Interesting bit - Chiswick, which is the seat of the Devonshires (still is), was used for Pemberly in the Pride and Prejudice movie with Kiera Knightley.

Theresa, I can't wait to dive into the book. I noticed there's a sort of prologue that discusses the politics of the time, so I'll wade through that. I had read elsewhere that the Devonshire set affected a "Devonshire Drawl," where they had certain pronounciations for words like "yaller" for "yellow." I wonder if Georgiana was responsible for those? She was beautiful though - so many times you read that this or that historical figure was "beautiful" and then you look at the paintings or drawings of them and go "huh?"

Wonderful blog, Carol! Now I can't wait to see the movie. Time to open up Netflix and add it to my list.

Chiron, I'm going to watch it again before I return it to Blockbuster - the hats and hair/wigs are reason enough to watch again!