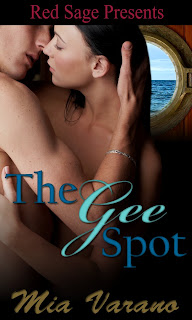 It's new cover time! I recently got the cover for my Red Sage Presents story, The Gee Spot, a reunion tale with a kinky twist. As always with Red Sage, I love the cover. The man on the cover is a perfect representation of my hero, A.J. I'm not sure about the release date for The Gee Spot, probably some time in the fall or winter of '09, so I'm including a short excerpt from the story. Enjoy The Gee Spot (or your own g-spot for that matter).

Jones waited for the chuckles to subside. “The Gee Spot, of course, is the hottest line of sex toys on the market. The company does most of its business online but has boutiques in London, Paris, and Rome, and has even arrived in Middle America with a new shop in a Kansas City mall.”

Hayley relaxed her grip on her napkin and exhaled as Jones reeled off her company’s impressive sales statistics. “Please give a round of applause to our fifth award recipient, Hayley Grant, the woman who insists on quality testing every item she sells.”

The blood thumped in Hayley’s ears, drowning out the applause. Who the hell did he think he was? She thought this recognition tonight would give her parity with the legitimate businesswomen in the room. A.J. Jones just skewered that with his insulting jokes.
She pushed away from the table and stumbled to her feet. The unsteadiness of her gait owed nothing to her five-inch heels. After tripping over the first step to the stage, she squared her shoulders. She’d tell A.J. Jones to take that award and use it as a butt plug. Her heels clicked across the stage until she faced him.

His gaze, hard beneath half-lidded eyes, tracked up and down her body. Power hung about him like a mantle, but she stoked the burning embers of her anger to prevent her from melting into a puddle at his feet.

While he handed her the award, a crystal pyramid, he extended his other hand. She gripped it in her best ball-breaking handshake and ground out through clenched teeth. “How dare you make a fool of me?”

His large hand engulfed hers as he squeezed back, but it didn’t hurt. Instead his firm grip sent a river of sweet honey coursing through her veins. His eyes dropped to her chest, which rose and fell. Her traitorous nipples hardened and poked against the silk fabric of her dress.

A smile curved his full lips, and Hayley drew in a quick breath. He knew. Some sensor in his eyes tracked every response in her body.

He dropped her hand and placed his fingertips on the swell of her hip, one finger, like the hot iron of a brand, resting on her bare back. He nudged her against his body so they could face the camera together.

As his fingers skimmed down her hipline, no doubt noting the absence of panties, edible or otherwise, he ducked his head, his whisper caressing her earlobe.

“How dare I? Just my way of getting even with Hayley Grant, bitch princess of Monroe High School.”

By Mia Varano at January 22, 2009
Email ThisBlogThis!Share to TwitterShare to FacebookShare to Pinterest

OK, I can't wait to read this one! Awesome excerpt. Great cover too!

The cover is hot. The excerpt is even hotter! Congrats, Mia!!

Beautiful cover, Mia!! I enjoyed the excerpt too!!

Love the cover, and I love stories of revenge. lol Great excerpt.

Thanks ladies. I'm always impressed by how classy the Red Sage covers are. Sandy, yes revenge, but an oh-so-delicious kind of revenge!

Wonderful cover and the excerpt is Dee-lish!

Love it Oh and the cover looks great too !!